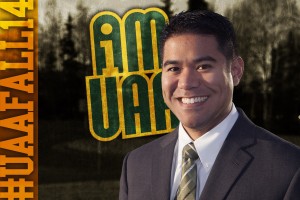 I AM UAA: Duke Kahumoku (Photo by Philip Hall/University of Alaska Anchorage)

Duke's college career is marked with some fairly significant bookends. Four years ago, he left his job and decided to enroll at UAA as a non-traditional student. That first semester, though, his wife had an emergency C-section, giving him plenty of reasons to doubt his decision. "I had no idea what I was going to do, I wasn't sure if I was going to come back," he admitted.

With a newborn at home and a four-year-old son who didn't appreciate dad's study sessions, it was a stressful semester. But he ended up with a 4.0. Four years after that halting start, Duke is loaded up with 19 credits and gearing up for finals. It's going to be another memorable week-his wife has a scheduled C-section on Wednesday, welcoming the couple's third child during Duke's last days of exams.

With so much going on outside of academics, Duke credits UAA with teaching him some life lessons as well. "Before I started at UAA it was very difficult to separate and compartmentalize things," he said. "If I had all this going on when I first started, I would have gone crazy because I didn't know how to put things in their own place ... I had to learn how to do it because there was no way I was going to get through school and have a family and work."

On Sunday, Duke will address the graduates as their student commencement speaker and he has big goals for his short speech. He wants to celebrate his classmates, inspire the audience and thank his professors. It's a mighty task, but he can hopefully compartmentalize again.

When Duke takes the podium on Sunday, he'll see a crowd of classmates he may not know. But he understands their stories. In his eyes, every cap and gown comes with a tale of personal perseverance. "We all have life challenges, so just the fact that we got to graduation and are graduating from college is huge," he said.

"I want to congratulate the people in the class who were also non-traditional students, who have families too. I also want to let people in the audience who are thinking about coming back to school-they're older, they have kids and a career-just let them know that it is possible. It's tough, but it is possible."

He also wants to sincerely thank the professors who helped him get through the more challenging semesters. "I know for a fact I would not have been able to graduate if the professors weren't as understanding or as compassionate or worked with me," he noted. "Their flexibility is huge."

"I want to highlight that and celebrate them and their service to us because without all their help, I think very few of us would be able to get through."

He may also include a shout-out to all you generous door-holders on campus (and there are many). "I've been 15 or 20 feet away from a door and people have stood there and just waited," he recalled. "Being willing to stay that extra couple of seconds just to make your life a little easier says a lot about UAA students as a whole."

But no more spoilers. You'll just have to stop by on Sunday to hear his commencement address. Hundreds of graduates and families will fill the Alaska Airlines Center for the building's inaugural graduation on Sunday. For Duke, a first-generation college graduate, the most important members of the audience will be his supportive wife, his 9-year-old, his 4-year-old and their latest addition. If you hear any 4-day-old infants wailing in the audience, you'll know which graduate he's cheering for.

Learn more about Duke's involvement on campus-including as Secretary General of Model UN-in his April 2014 "I Am UAA" profile.