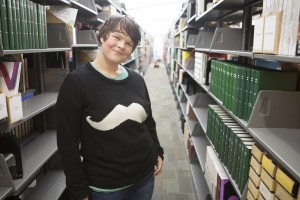 Midwesterner Megan Marquis was surprised to learn that flying in Alaska means smaller planes the farther you fly from hub cities like Anchorage. Her theory that students learn better outside the confines of a classroom was put to the test on her first seat-gripping, bush plane adventure into rural Alaska. This spring Megan was awarded a Second Bridge Scholarship from UAA's Center for Community Engagement and Learning (CCEL) that funded her out-of-class experience. In July, Megan traveled to Chevak with UAA science education professor Irasema Ortega to work with Alaska Native elders, teachers and students in the Kashunamiut School District. Work on their project, an iPad-based Cup'ik language atlas of plants and animals-a tool for language preservation and science education-began as soon as they landed (and definitely before Megan's stomach had a chance to settle).

"We hit the ground running," she said. With just a week to collect data for the atlas during Megan's first trip, they worked long hours, talking with elders and translators, venturing out onto the tundra to capture images of flora and fauna, learning from the school kids and teachers and, of course, recording it all. 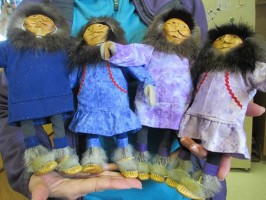 "At the end of the day, village public safety officers shepherded children back to their houses to have dinner with their families and we were typing away," Megan recalled. "They were long days-sometimes 9 a.m. to 1 a.m." Despite the long days, she's glad to have had such an incredible experience.

"To actually get to work with rural elders and see their basketry weaving in progress, to see the seal skin dolls they make..." she said. "I would have never have imagined doing that."

In 2006, the Kashunamiut School District began a Cup'ik immersion program for students. The recently completed atlas, with pictures, text and audio recordings of pronunciations, is now an important curriculum tool.

Crafting her own curriculum

Megan's ultimate goal in studying education at UAA is to learn how to best serve school kids who fall through the cracks. After doing her homework, she decided Anchorage and UAA were a good place for her to start. 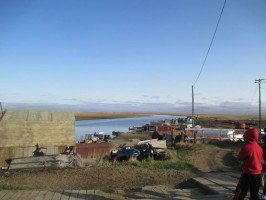 View of the Chevak River. (Photo courtesy of Megan Marquis)

"I want to create my own school for social change," she said. She admits it's tough to maintain enthusiasm for what sometimes seems like a solo mission, but one thing that energizes her is finding ways to tweak her own education so it's not four years of sitting at a desk.

She discovered CCEL soon after her arrival at UAA and went to the office to learn more about becoming a student liaison. Student liaisons are charged with forging connections between UAA and community non-profits or governmental agencies. While she was in the office, the CCEL director, Dr. Judith Owens-Manley, told her if she was interested enough in community engagement to become a student liaison, she might want to take a look at the Second Bridge Scholarship application.

"The Second Bridge Scholarship Award is a unique opportunity for a student to design something for themselves . . . an encounter, an experience, a trip, an engagement with a community that will challenge them in a way that crosses a second bridge for them," said Judith. "Students have typically had to face something already in their lives-a first bridge that was challenging to them in some fashion. Now they get to create a next step that will take them to another level of engagement with community and another opportunity to learn and grow. It's been an amazing experience for the students who have gotten these awards over the past four years."

While Judith was explaining some of the opportunities Megan could pursue with a $2,000 Second Bridge award, Irasema walked into the office. Megan calls it serendipity. 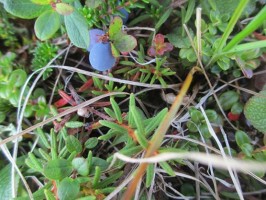 Megan's first time berry picking in the tundra and photographing plants for the Cup'ik atlas. (Photo courtesy of Megan Marquis)

"Judith said, 'Ira, do you have anything you'd like to share with us about what you're working on?'" And that's how Megan first learned about the work the College of Education has been doing in Chevak.

Second Bridge applicants need to have a faculty sponsor, so Megan pursued Irasema and they formulated a joint plan for her proposal.

"It was the first proposal I've ever written," said Megan. It was also a success. Now she's looking at other programs and scholarships that will keep her traveling as she pursues a degree in elementary education with an anthropology minor and a certificate in community engagement.

"When you meet people, you never know where they can take you. Or where you can take them," she said. "It's been such an adventure."

"‘Second Bridge’ to rural Alaska for College of Education student" is licensed under a Creative Commons Attribution-NonCommercial 4.0 International License.