That situation describes Gabrielle Bejarano's first semester of college, at age 19 in Colorado Springs. Now, at 33, she's nearing graduation after 14 years of focus. She hasn't let a continuous string of adversity keep her from enjoying the college experience, though. Her current list of extracurriculars is impressive for any student, let alone a mother of two and a military spouse. 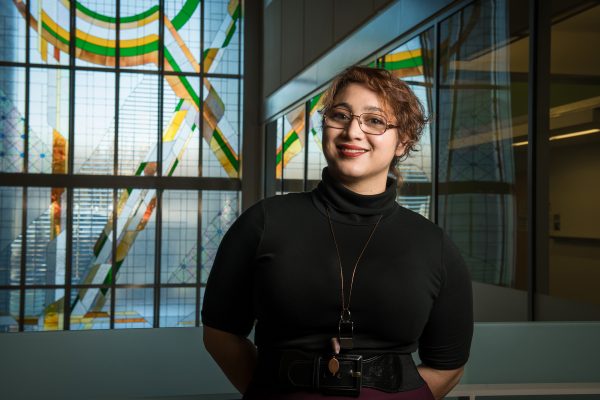 So why put all this effort toward a degree?

"I look at education as the engine of social mobility," she said. "I find myself to be proof of that."

Gabrielle married her husband Nathaniel in 2004 and they moved to his first base assignment, the Air Force Academy. While there, Gabby enrolled at University of Colorado Colorado Springs. During her first semester, Gabby delivered newspapers from 4-6 a.m., then dropped her one-year-old daughter at day care before heading to class. She closed out her days stocking shelves at the grocery store.

In the years since, she's worked everything from retail to custodial to golf course recreational assistant. But an on-campus job reaffirmed why she was pursuing an education.

"My first job that I had as a [chemistry stockroom] lab assistant was pretty eye-opening ... I belong in the sciences, this is what I'm supposed to be doing," she recalled.

Gabby continued chipping away at courses while the family was stationed in Omaha. The birth of their second child, plus an impending reassignment to Alaska, kept her out of the classroom for a few semesters. But by the time she enrolled at UAA in 2015, she was only six core classes away from a chemistry degree.

And then the university discontinued the chemistry major. Another setback, another opportunity. She turned to geology and found it blended her scientific interest in chemistry and physics, while adding a visual component to match her artistic interests, too.

Today, she has a 14-year-old daughter, a 5-year-old son, and a slate of upper-level science classes. She watches the family whenever her husband is deployed or on temporary duty assignments. He takes the reins while she's heavily enrolled in courses.

"We sacrifice," she said. "Being a military spouse, it doesn't matter what university you're at, it's difficult."

Extracurriculars with a purposeful punch

Gabby's life is already full, so her extracurriculars need to pack a purposeful punch.

After a wide range of jobs, she's found meaningful work with the Department of Natural Resources at Independence Mine. She helped design geology interpretation displays (look for them in the back of the manager's house) and even built her own geology tour.

"My job duties ... gave me a platform to practice geology with the general public. Everyone comes from all over the world to go to Hatcher Pass," she said, citing Australian miners and Tibetan Monks as a few of the summer guests on her geology tours.

On campus, she's achieved quite a bit as secretary of Geology Club. She helped plan this month's annual career fair, contacting and inviting agencies to campus. She then went one step further, arranging a career panel with representatives from USGS, NOAA and Alaska-based JOA Surveys.

Now that the career fair is complete, she's organizing an overnight field trip from Anchorage to Sheep Mountain (and this is all in addition to her roles as a mother and student.)

She's billing the field trip as an equal opportunity enrichment. "You show up at UAA, you don't pay a dime," she said.

Several professionals - who Gabby invited - will speak to a crew of 15 students throughout the field trip. The entire thing - meals, hotel, transportation - is jointly funded by Student Life, UAA's Special Projects Fund and the Chugach Gem and Mineral Society, all of which she petitioned and presented to for funding.

"I believe ... any person wishing to learn and put in the work is entitled to an education," she said, explaining her effort to fund the field trip.

"For me, there's always been a real joy in teaching people things that they normally wouldn't have access to. It's a powerful and wonderful thing," she said.

Gabby expects to graduate in December, after a 14-year journey through higher education. Her family will stay stationed in Alaska through at least 2023, but the future is wide open. Stratigraphy? Petrology? For now, she just knows her next gig will be great, because she followed her interests to get there.

"Through all the different experiences I've had and all the different struggles ... I'm the happiest and most fulfilled when I'm true to myself and my passions. I'm pretty passionate about the sciences, so that's why I'm here," she said

And she never lost focus on the goal of graduation.

"There's a lot of different places I could have stopped," she said, "but I'm most fulfilled here."

"Geology senior nears graduation after 14 years of effort and adversity" is licensed under a Creative Commons Attribution-NonCommercial 4.0 International License.