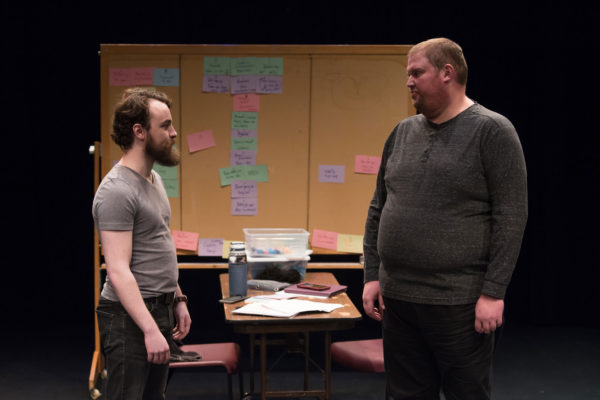 Reliving one of the lowest periods of your life in front of a crowd of strangers - and worse, friends and family - sounds like the kind of creative cruelty at home in the pages of Dante's Inferno. But for theater major Taran Haynes, it's less tortuous and more therapeutic.

Haynes is one-half of the writing, directing and acting team behind We Storied Two. Performed in February, the play partly focuses on Haynes' ADHD, and how his friendship with assistant professor, theater department chair and the other half behind the production Brian Cook, Ph.D., helped him embrace his struggles.

"The play is about us, really it's as simple as that," describes Haynes. "It's about us and our stories, and these different paths and struggles that we have. It shows the trajectory in which he and I have come to be friends and help and support each other, and show how transformative that can be in somebody's life." 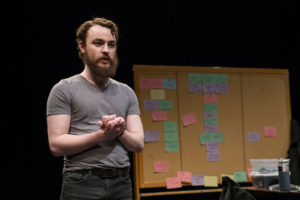 We Storied Two partly focuses on Haynes' struggles with ADHD, and how his friendship with Cook helped him embrace his condition. (Photo by James Evans / University of Alaska Anchorage)

Ironically, what ultimately became the inspiration for We Storied Two was almost what kept Haynes from producing the play at all.

According to Cook, in 2015 the Department of Theatre and Dance began implementing a policy that required undergraduates to meet a minimum GPA to be eligible for casting in university productions. Unbeknownst to him, this barred Haynes - who acted in a play for Cook the previous semester before the new rules took effect - from auditioning for future performances.

"I was stunned to learn this bright and talented student had terrible grades. I met with him to ask what was going on, and he disclosed that he'd recently been diagnosed with ADHD but wasn't getting solid treatment. He was despondent I discovered this secret, embarrassed at what he perceived to be his failures, and crestfallen that those 'failures' were going to get in the way of the thing that he'd come to really love: acting and theater," recalls Cook.

After that discovery, Cook offered to let Haynes continue participating in shows, albeit behind the scenes, while the two worked to bring up his grades. Both confess that this first attempt wasn't as successful as either hoped, like the first draft of a new play. At that point, Cook felt like he had let down Haynes as a teacher and mentor.

"We had a meeting that next semester where my only intent was to apologize for the fact that I hadn't done what I was supposed to do," reveals Cook.

Cook and Haynes describe that meeting as a pivotal moment in their lives. In fact, it's so crucial to both their journeys that the meeting is faithfully recounted in We Storied Two. They refer to it as "the forgiveness scene." 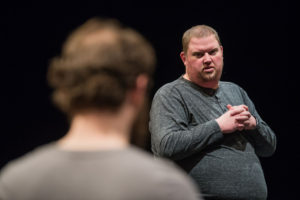 Cook has helped Haynes learn to work with his ADHD instead of against it by reorganizing his life in line with how his brain works. (Photo by James Evans / University of Alaska Anchorage)

"People tried to help before, but those efforts took the form of reiterating what I wasn't doing, which I was already well aware of," explains Haynes. "Well meant as those efforts were, they just reinforced my guilt and self-blame, leaving me feeling worse than I already did, and then left me without any support to fix the problems that had brought me to struggle in the first place.

"The forgiveness scene was different. Brian didn't crucify me. Instead, he apologized for not reaching out to help despite knowing my struggles much sooner. In that meeting, he 'forgave me' by telling me it wasn't my fault for struggling the way I had all my life. That meeting took off the colossal emotional weight I'd been carrying with me for years, and free from the blame, guilt and shame, I was finally able to face the word without fear of feeling bad again."

Since that fateful meeting, Haynes says he's learned how to work with his ADHD instead of against it by reorganizing his life in line with how his brain works. He now has an established routine and breaks down larger projects into more digestible tasks, which he admits are solutions he's heard of in the past, but this time he had Cook for support. The results speak for themselves.

Haynes' grades have completely turned around, earning him a spot on the dean's list twice. His work has also been accepted into two national playwriting festivals, as well as Understory, the university's annual writing anthology. In addition, Haynes is one of two students completing a departmental honors project in directing, which includes directing a show for UAA's main season, performing in the Harper Studio in late April.

Perhaps most important is the fact that Haynes is able to act again.

"I can't imagine anything more important than teachers being invested in their students. It changed my life forever," shares Haynes. "But I also recognize how impossible it is to put that demand on somebody, because it really is the hardest thing."

"All the faculty members at the university care deeply about students," adds Cook. "But that happens so naturally in this department because we work so closely together and do shows together for so long, and theater is all about empathy." 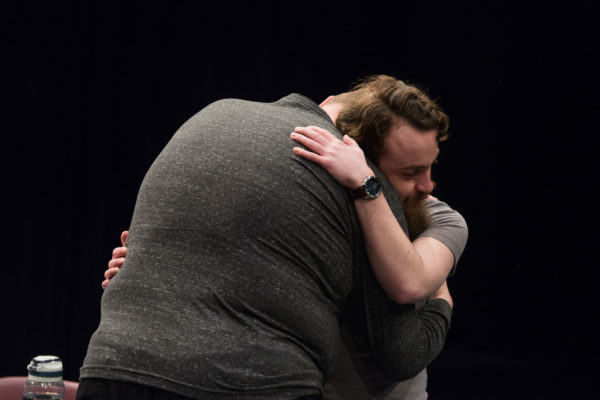 A pivotal meeting for both Haynes and Cook is faithfully recounted in We Storied Two, referred to as "the forgiveness scene." (Photo by James Evans / University of Alaska Anchorage)

"Theater student and professor team up to tell their story of forgiveness" is licensed under a Creative Commons Attribution-NonCommercial 4.0 International License.