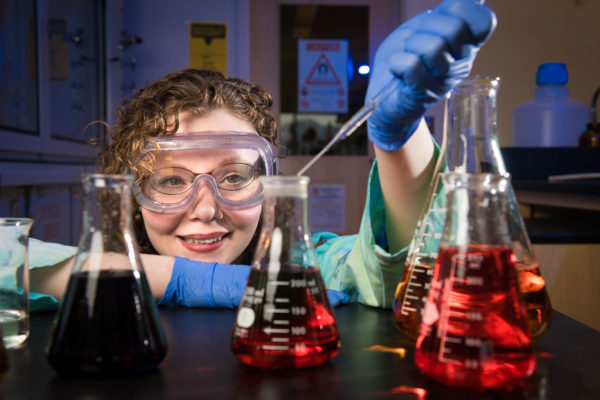 Toshia Wrenn, Ph.D., is a term assistant professor of chemistry at UAA, as well as a tireless advocate for spreading science literacy through outreach programs and STEM events. She regularly volunteers with organizations like Girl Scouts of Alaska and the American Chemical Society, the latter having named her one of 2019's Outreach Volunteers of the Year. (Photo by James Evans / University of Alaska Anchorage)

Do you remember how much slime permeated your childhood? From the Nickelodeon network to the Goosebumps books, it was just about everywhere. It's that ubiquity that makes slime such a key component of Toshia Wrenn's science outreach.

Wrenn, Ph.D., is a term assistant professor of chemistry at UAA, but her teaching isn't confined to her classroom or to undergrads. Wrenn is a tireless advocate for spreading science literacy through outreach programs and STEM events. She regularly volunteers with organizations like Girl Scouts of Alaska and the American Chemical Society, the latter having named her one of 2019's Outreach Volunteers of the Year.

Anyone who grew up during the era of Bill Nye the Science Guy and The Magic School Bus should be familiar with Wrenn's approach, which is to introduce seemingly complicated science concepts to kids via their interests and fun, hands-on experiments, hence the reliance on slime.

"Say the word slime and every child's face lights up," describes Wrenn. "It's just Elmer's Glue, water, borax solution and highlighters. It's so simple, but then we make the slime and we talk about polymers and fluorescence and the different chemistry behind those things. 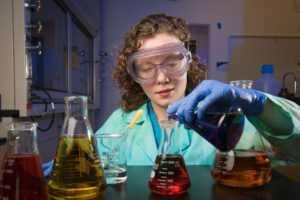 Similar to edutainment icons like Bill Nye and Ms. Frizzle, Wrenn's proven approach to teaching science is to introduce seemingly complicated concepts to kids via their interests and fun, hands-on experiments, like creating slime. (Photo by James Evans / University of Alaska Anchorage)

"Science in a textbook isn't going to grab anyone's attention. What outreach does is it takes that chemistry they probably saw and may have slept through in class, and then ties it to something they can see and is interesting to them. All too often science happens in this academic bubble and people don't realize it's all around us and it's not as scary as it seems. Like slime, it's a polymer, that's what's in our plastic bags and our medical implant devices."

Another one of Wrenn's go-to experiments is called Chemistry in a Ziploc Bag, and involves mixing baking soda, calcium chloride (road salt) and water in - you guessed it - a Ziploc bag. While the end result isn't slime, the chemical reaction instead produces heat and is similar to how hand warmers and road melt works, which is arguably more useful in Alaska than slime.

As someone who credits outreach programs for kicking off her own passion for science, Wrenn understands firsthand just how vital they can be in order to keep people entering the field.

"Bringing [science] down to something that's not intimidating is really important because if we keep scaring off our next generation of scientists, we're not going to have anybody who wants to step up to the plate," explains Wrenn. "So making it less intimidating, easily understandable and readily applicable to their lives is what's so crucial about the outreach we do."

According to Wrenn, who grew up in rural Tennessee, there weren't many opportunities for her to conduct hands-on science experiments until reaching college. Originally a medical technology major, her first real brush with her future calling was the chemistry class she was required to take, and the university's ACS Club she joined for extra credit. 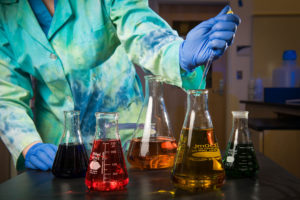 Wrenn credits outreach programs for kicking off her own passion for science. Originally a medical technology major, she switched to study chemistry after joining her university's ACS Club and saw how excited people were to learn science. (Photo by James Evans / University of Alaska Anchorage)

Everything clicked for Wrenn one fateful Halloween. The ACS Club had a table set up with spooky punch - which contained dry ice for maximum effect - and liquid nitrogen ice cream. Both elicited enthusiastic questions from people stopping by, which Wrenn found easy to get caught up in.

"Seeing how excited people were made me more interested in what we were doing and that's part of what drove me to being a chemist," recalls Wrenn. "I got questions about why [the punch] was bubbling and where the fog was coming from. At that point, I didn't know, but I wanted to learn more from interacting with people who were excited. Then I transferred that into, 'Well, if excitement makes me interested in learning, maybe I can bring that to the community and get others interested in learning?'"

Wrenn switched her major to chemistry while never straying from her roots in outreach. While pursuing her doctorate, she received funding to create a program that sent her to other rural communities in Tennessee to teach science. Coincidentally, that skillset carried over perfectly when she decided to move to Alaska. Once here, her first job was with Camp Fire Alaska, where she similarly traveled to rural Alaska to teach science.

While it can be easy to view her efforts as aimed squarely at kids, Wrenn considers their parents - and even the whole community - as much a part of her audience.

"I'm not just looking at getting the next generation of scientists involved, but also reaching out to parents and the community so that we have more support behind the sciences," says Wrenn. "If people don't understand why doing research is important, they can't tie that to their life and they're not going to want to support it. And without support, science doesn't happen." 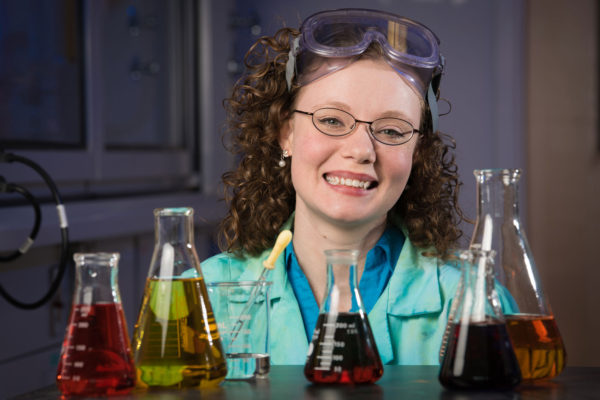