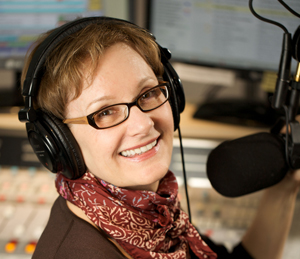 For the past 39 years, Barbara "Bede" Trantina has helped Alaskans from Southcentral to the North Slope start their days as Alaska Public Media's (AKPM) morning show host.

From local politics to national news, Bede's voice has filled the airwaves, keeping Alaskans informed on the news of the day. Although Bede has become synonymous with radio in the state, her role as AKPM's program director and morning show host started as a casual volunteer opportunity.

After graduating from Northern Arizona University with a bachelor's degree in fine arts in 1978, Bede packed her bags and headed north to Alaska for adventure and fun in the Last Frontier.

The following year, in 1979, Bede walked into Anchorage's brand new local public radio station, KSKA (AKPM's former name) to volunteer and help a friend. As soon as she stepped through the radio station's doors, she knew she'd found her calling.

Throughout her career as KSKA's morning host and program director, Bede worked closely with newsrooms and national networks to deliver coverage of events - from the Exxon Valdez oil spill and September 11 to the Iditarod and local elections. Her commitment to journalism, AKPM and the community she covers is evident in the care she takes to cover and inform Alaskans. She has overseen major changes at the station, including the mergers of the public television station and the creation of the Alaska Public Media.

Throughout her tenure at AKPM, Bede has mentored many Alaskans in the broadcast field and has helped usher in new generations of Alaska's local radio journalists.

In addition to her extraordinary career, Bede has carved a special space in her schedule to care for the most vulnerable in our community. She has long been a member of the Cuddle Corps, a group of volunteers that provides comfort to prematurely born infants in Providence Alaska's Neonatal Intensive Care Unit.