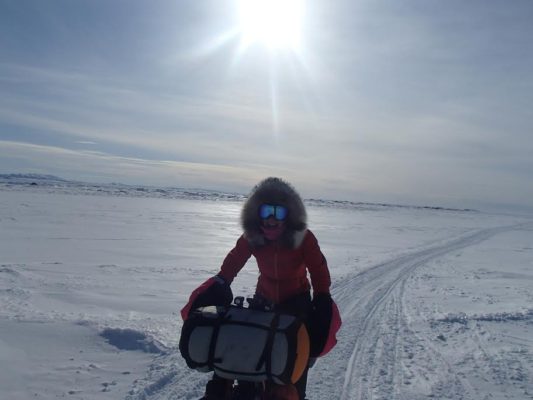 You might say that UAA College of Engineering facilities manager Kim Riggs is hardcore. She recently completed the Iditarod Trail Invitational (ITI) 1,000-mile bike race. But the petite, athletic Riggs feels like she's one of many, among a growing movement of outdoor adventurists, who enjoy the challenge of a human vs. wild event.

In recent years, this once niche sport of endurance athletic competition has gained popularity with racing events like the Tough Mudder, ultra marathons and the rising popularity of triathlons. In Alaska, running, biking and endurance competitions have recently popped up, inviting those who are looking for more endurance sport competitions and to test their fortitude in the state's vast wilderness. ITI has been around a while but has been in its current format since 2002. Recently, it's been gaining steam with endurance athletes in Alaska and beyond. Compared to other racing events in the state, ITI is still pretty small, with about 62 athletes competing across the three race events this year, and only 10, including Riggs and her biking partner Melissa Schwartz, in the 1,000-mile race.

Riggs spent months preparing for the longest race she'd ever competed in. Working full time, as well as regular deployments with the Air National Guard, squeezing in training was tough, and she had to get creative in not only accumulating the miles she needed but also preparing her body for the weight of the bike with all her gear.

"I would commute to work at least once or twice a week with all my gear on my bike and try out different things," said Riggs. "My bike would always be in my office with my sleeping bag on it and all my survival gear." 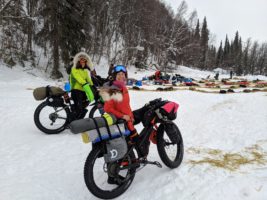 Taking a break to talk with some of the mushers during the race. (Photo courtesy of Kim Riggs)

She got a lot of inquisitive questions from colleagues, wondering what she was up to, and she would explain the trial and error process she was working through to prepare for her upcoming event. Riggs said after commuting to work with all her gear and working a full day, she would jump on her bike and ride around the trails for a few hours before heading home to get miles in.

"The biking is the easy part; it's really all the preparation, the planning and the logistics that's hard," said Riggs. She said she and Schwartz spent months planning for their 1,000-mile trek. The two took a three-step approach to prepare for their journey, first, anticipating their food needs and mailing out food supplies to villages at different points along the course. Secondly, they studied the trail's varying terrains, scouting troublesome spots where they would potentially encounter sea ice or where they'd be cycling along stretches of open tundra and potentially be exposed to high winds. Lastly, they analyzed their gear, trying to visualize all the types of conditions they might possibly endure and pack as lightly, but as efficiently, as possible.

"You need to have the right gear and know how to use it and have it packed on your bike, which is challenging," said Riggs laughing. "There's only so much you can fit and it's a huge factor of deciding what you're going to bring and not bring."

Riggs and Schwartz spent one-third of their 21-day trip sleeping outside and the others either sleeping in cabins along the way or in some of the local schools or homes of people they were invited in to. So they had to be strategic about what gear to pack along with them, which included for Riggs, a sleeping bag for up to 60-below, dry bags, warm layers, spare bike parts, tools and bike pump, a medical kit and a stove with gas.

"We typically carried enough food, especially for some of the long stretches, for three to five days," said Riggs. "There's a stretch along the Yukon River of about 122 miles where there's no opportunity for resupply." 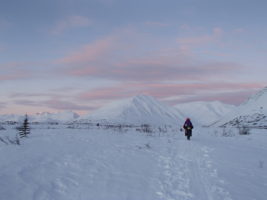 Riggs said having enough of the right gear prepared them for whatever conditions they would encounter along the way, saying this year, because of the unseasonably warm winter, they ended up walking their bikes due to icy overflow, whereas in years past they were able to cruise through certain parts of the trail.

Surprisingly, Riggs said she and Schwartz opted out of packing a tent, but at the last minute threw in a tarp, "just in case," and is glad they did. She said this year it was pretty wet, but especially along the Yukon River, they encountered heavy wet snow and sleet, and the tarp came in handy for building a makeshift shelter using the bikes to protect themselves and their gear.

"It was a good decision - last minute," said Riggs smiling. "I think I would consider bringing a tent if I did it again."

Tales from the trail

"It was a pretty amazing experience," said Riggs reflecting on her race. "There were definitely times out there that it just seemed insurmountable, like when I was halfway through. It felt like I'd gone so far, but I was only halfway through."

For many distance athletes, at one point or another during a grueling race, there will be a battle of wills between the mind and the body. A game of mind over matter, where a competitor must convince their brain to keep going so their body will follow, and in a 1,000-mile race, Riggs said there was a lot of time for doubt to creep in.

For her it was baby steps and getting into the groove of a routine, repeating the same motions without thinking too much about it, that helped her climb on her bike and pedal for a 50-mile day.

"Once you start riding and start pedaling, it's fine," she said. "It feels natural, but sometimes the thought of getting up and riding for 50 miles that day, just felt insurmountable. And then doing that for another two weeks seemed overwhelming at times."

On the flip side, she said it was an incredible experience to be out on the trail with the Iditarod going on. The ITI started a week before the Iditarod sled dog race, and while she and Schwartz were on the trail, they were passed by the mushers who would often wave and cheer them on.

"We sometimes got to see and interact with the mushers," she said. "And it's kind of funny because we're out there and think they're crazy, because they have to take care of all these animals, but they're looking at us, thinking we're crazy."

At one point, musher Martin Buser, who is a supporter of the biking community and hosts the Susitna 100, pulled over toward the end of the Yukon River - a particularly difficult stretch of the trail - and unexpectedly tossed the women some smoked salmon and mango.

"That was a highlight and little morale booster," said Riggs.

"Within a week [of completing last year's race] she texted me and said, 'Hey, do you want to ride to Nome?'" said Riggs laughing. "So that's how I ended up doing this, I didn't plan to. And every day this year, she and I kept saying we're never doing this again, but as soon as it's over you forget."

Riggs said despite the grueling training schedule, the long 50 miles or more days out on the trail and the physical pain of doing the race, the memory of those aspects dissipates fairly quickly and all she's left with is the athletic high of having accomplished an incredible physical challenge. 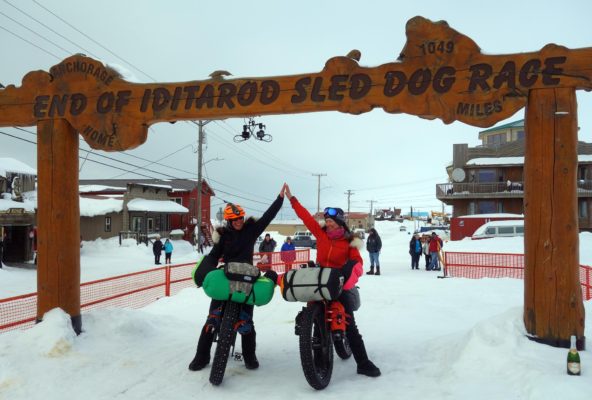 Riggs and her biking partner Melissa Schwartz celebrating with a high five under the burled arches in Nome. (Photo courtesy of Kim Riggs)

She said Schwartz has already texted her, poking her to see if she's up for trying the northern route next year, and Riggs said maybe after having done both the southern and northern routes, it will be out of their system.

In the end, it took Riggs and Schwartz 21 days, 23 hours and 39 minutes to bike 1,000 miles from the race's trailhead at Knik Lake, near Anchorage to Nome. They were the only female competitors in the 1,000-mile race. Maybe they'll sign up for 2020's race. They haven't totally committed, but one thing is for sure - that Riggs will continue to challenge her body and mind through endurance athletic competition.

"I enjoy racing and challenging myself and in this race, it's not so much racing against people," said Riggs. "It's more racing against yourself and the trail and testing your own limits."

"In a 1,000-mile bike race, the biking is the easy part" is licensed under a Creative Commons Attribution-NonCommercial 4.0 International License.