Love, loss and a Fulbright Scholarship 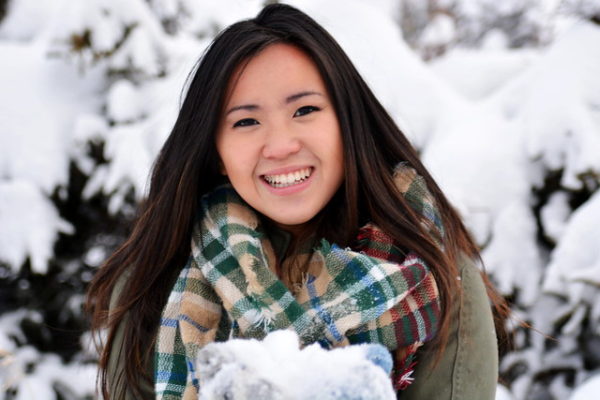 UAA alumna Maia Wen graduated with a bachelor's degree in psychology and a minor in communications, and was recently awarded the Fulbright Student Scholarship to study abroad in Spain. (Photo Courtesy of Maia Wen)

Sitting in a classroom at Robert Service High School, taking notes and studying for her AP Psychology class, then junior Maia Wen knew that this was the career she wanted to pursue. Her teacher, Kathy Walgren was inspiring and pushed her and her classmates to think outside the box and use the knowledge they'd learned in the classroom and apply it to real life. She recalls feeling that spark and the excitement it elicited from confidently knowing what you want to do.

"That class was the point in which I decided that it was something that really interested me yet challenged me, but I also found it very relevant, learning about society and other people," said Wen, who recently graduated with a bachelor's degree in psychology and a minor in communications from UAA. The 23-year-old now lives in Denver, Colorado, where she's working with AmeriCorps and was recently awarded a Fulbright Student Scholarship to travel to Spain.

UAA was not originally Wen's first choice for attending a university. She, like many young adults, dreamed of flying the coop and heading to the Lower 48 for an out-of-state adventure and education. But life had a different roadmap for her and she ended up staying to care for her ailing mother when her health took a downward turn.

"I couldn't envision myself leaving my mother or my sister because I'd taken care of them growing up, and that continued once I graduated from high school," she said. Wen's mother had been diagnosed with diabetes early in her childhood, and she was used to her mother not always being in top shape, she suffered from kidney failure and weight issues, and by the time she was in seventh grade, her mother had lost her leg, struggled with her prosthetic one, and ultimately ended up becoming wheelchair-bound. "I think it was hard to make those sacrifices and to have responsibilities that other people my age didn't have, but i am grateful to have gained an improved perspective about what is more important in life."

Maia was only into the first semester of her freshman year at UAA when her mother suddenly passed away. It was a complete shock. She and her younger 14-year-old sister, Anna, were suddenly alone.

It was the hardest year Wen had ever gone through. It was hard to see a silver lining, but looking back she said it was fortuitous that she turned 18 three weeks after her mother's passing, so she was legally an adult in the eyes of the state and could apply for guardianship of her younger sister. What she didn't expect was the six month court battle with a family member over that guardianship and the difficulty of not only dealing with her grief but also supporting her sister and trying to secure healthcare, social security funds, and a new apartment.

"I was working part time and was a full-time student," said Wen. "We really tried to be responsible and did our best. But it was hard for me to be both her sister and her authority figure and we were both kind of lost without our mother." It was an incredible load on her shoulders, but she said pulled through due to the great family friends she and her sister had, and an unexpected source of community and support, UAA.

Two UAA professors, Shawnalee Whitney and Steve Johnson, helped raise funds for Wen and her sister so they could recover some of the money lost in the court and pay their dedicated attorney, Robin Taylor, who took on their case pro bono. She said she is forever grateful for the people who came to her aid and formed an invisible net to catch her and her sister so they could continue to live, learn and thrive in the city they called home.

The UAA experience, it's not what you'd expect...

"Professors here are so dedicated to their students in giving quality classes and providing mentorship for their students," said Wen of UAA's faculty. "I think apart from my intrinsic interest in learning, the relationships I built in the psychology community and in the Honors College at UAA, motivated me to become more engaged."

Wen said while attending UAA she took advantage of most of the opportunities afforded to her through the psychology program, and even ones offered outside the university. She said what she learned as she continued through her program is that UAA has an incredible network that provides students with opportunities to experience real-world aspects of their degree they might not get at larger universities or at least until they're in grad school. She felt that all of the projects she worked on in and out of the classroom were unique and really provided her with a much more well-rounded undergraduate education.

"That's the part that I most enjoyed about being a student at UAA," said Wen.

Wen also graduated with a minor in communications and said that was partly inspired by her fascination with UAA's world-famous debate team. She laughs saying she was kind of a "debate team groupie," but ultimately, watching her friends powerfully and articulately argue on any subject from ethics and religion to technology and politics impressed her, and she wanted in on the action.

"It was a way that I could hone my public speaking skills," said Wen. "It ended up being a really good choice for me as I dove further into research projects and more public communication roles both at UAA and in the community."

One of those projects ended up being Stalking the Boogeyman, a project that former professor Rebecca Robinson had been working on through her research lab, the Community Psychology Research Collaborative, which consisted of undergraduate, master's and Ph.D. students.

"I joined that group and she started talking to me about UAA's role in Stalking the Boogeyman, and I ended up doing my senior thesis research on a few aspects of the play," said Wen.

When she wasn't attending classes, studying or helping conduct research, Wen spent her time participating in Psi Chi, the International Honor Society of Psychology Club, as well as lending her talents as a teacher's assistant to various professors within the psychology department.

"It was about six months before I graduated and I had always wanted to do the Fulbright because I really wanted to take a step back from the show-all, tell-all nature of academia and instead, listen and learn about a different way of living," said Wen, who had never traveled abroad before. "As the recipient of such powerful mentorship and support at UAA for both my education and the circumstance of losing my Mom, I knew how impactful that a Fulbright Scholarship would be on my life." 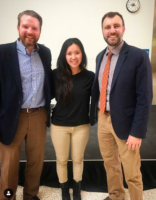 Wen with Dr. Eric Murphy, professor and director of UAA's Department of Psychology and Dean John Mouracade after her presentation at the Honors College Symposium. (Photo courtesy Maia Wen)

Originally Wen had wanted to apply for the scholarship opportunity much earlier but realized that her younger sister, who she was still her guardian for, would turn 18 while she was abroad. So she put her plans on hold.

"I was pretty content with that decision and kind of forgot about the Fulbright and kind of thought that ship had sailed," said Wen, who had graduated at the time, but was still working at the university. "I remembered that you could apply at for the Fulbright at any age, especially if you were a recent graduate and so in January 2018, I decided to apply again."

Wen was in Portland  in April this year when she found out she received the award, almost six months after applying for the scholarship and more than a year after she started the initial application process. She knew in January of this year she was a semi-finalist, but never dreamed she would actually be awarded the scholarship opportunity.

"It was complete disbelief," said Wen of when she read the email notifying her of the huge award. "I mean I was incredibly honored, but I didn't fully understand what had happened and I didn't really know how to react."

Now about a month later she's still in shock but is excited about her Fulbright Scholarship. Currently, she's in Denver working a year with AmeriCorps, managing and operating a reading center at an elementary school. She knows when she heads to Spain that it will be challenging in a whole new way, but she is looking forward to learning and observing Spanish culture.

"I got so incredibly lucky," said Wen reflecting on her life from being adopted from China by her mother, the educational opportunities she was afforded at UAA and the unexpected community that embraced her, to AmeriCorps work in Denver, to receiving the Fulbright Scholarship. It's been a full life and although there was grief, she's learned that she's resilient. "It seems so serendipitous considering how many paths my life could have taken. I am just so grateful for everyone who's helped me so far. I'll never forget all the assistance I've received, and I intend to always pay it forward by giving back"

"Love, loss and a Fulbright Scholarship" is licensed under a Creative Commons Attribution-NonCommercial 4.0 International License.