Taking a leap of faith from courthouse to hospital 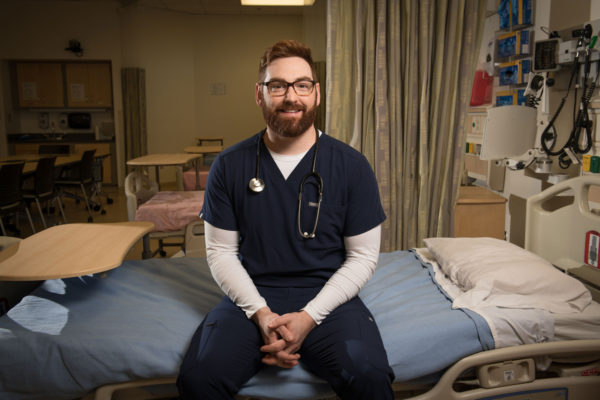 Born and raised in Kenai, Tyler Morris, B.A. '08, B.A. '09, B.S. '18, originally came to UAA to pursue a career in the legal field. After eight years doing just that, he decided to make the transition to nursing, which he describes as a more interpersonal way of helping the community. (Photo by James Evans / University of Alaska Anchorage)

Depending on who you ask, the average number of times a person will change careers during their lifetime can vary between three and seven. Tyler Morris is on his second career path, and he's positive this one is permanent.

Born and raised in Kenai, UAA alumnus Morris came to Anchorage in 2004 to study justice. His life seemed poised to lead him to the courtroom. Growing up, Morris participated in Youth Court. His father also worked for the Kenai Police Department, instilling an impression on the younger Morris for how to leave the community a better place.

After graduating (the first time) in 2008 with a Bachelor of Arts in justice, Morris dived right in to his first career, spending the following eight years working for the Alaska Court System.

"Originally, my plan was to go to law school and help people in that capacity," recalls Morris. "I have a lot of respect for attorneys, especially the ones who work in the public defender's office. But for me, I wanted a more interpersonal way to help people. I didn't know what I was going to go into until my sixth or seventh year, and then I saw nursing as a way to do that."

In addition to the more hands-on approach to helping people, Morris credits the plethora of nursing specialties and opportunities as another reason for his career transition. Do you need a break from working as a geriatric nurse? Shake things up by becoming a pediatric nurse! Maybe you're looking for a change in scenery? Simply move to anywhere else in the world in need of nurses! And as an added bonus, Morris' father could breathe a sigh of relief.

"My dad was more excited that I got into nursing than law enforcement because he knows the dangers they face," Morris jokes.

Choosing nursing as a new career was the easy part. Morris once again found himself attending UAA, this time taking classes at night, on weekends, off main campus and even online while still juggling his responsibilities at the Alaska Court System.

During his final year in the nursing program, Morris received a motivational boost in the form of the Darla "Dolly" Barton Nursing Scholarship. Considered by Morris to be a kindred spirit, the scholarship's namesake is no stranger to making big changes herself, having uprooted her life at the age of 52 to move from West Virginia to Anchorage. 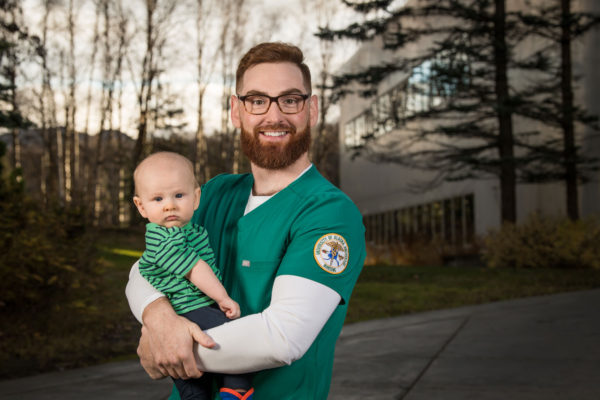 The scholarship was enough to get him past the finish line. Morris earned a Bachelor of Science in nursing science in 2018 - his third degree from UAA. Like the start of his previous career, he dived right in, now working as a psychiatric nurse for the Alaska Psychiatric Institute. As far as new jobs go, Morris seems to be transitioning just fine, thanks in part to adequate training, as well as some applicable skills he acquired from his days in the courtroom.

"I wasn't sure what to expect, but I feel like I was prepared well," explains Morris. "A lot of nurses say when they graduate they just don't feel ready, that they wish they had more time on the floor or working with patients. After going through the program at UAA, I felt I was prepared enough to have the basis to learn the specific branches of nursing. It's like an extension of nursing school. It's just more learning.

"What I was able to carry over from the legal field was the confidence to talk to people you don't know and to help them," he continues. "Initially, trying to help people was nerve-wracking for me, especially in nursing where you're kind of invading a person's personal space and learning the intimate things they have to share with you. I feel like I gained some experience before nursing to make that patient comfortable with talking to me about their health needs."

Even though Morris has been a nurse for only a few months, he's already excited to explore the scope of his new field. Morris describes one area of particular interest being neonatal nursing, a field he gravitated toward early in nursing school, and was solidified as a definite area of interest during his preceptorship.

Morris is doing what he can to help others interested in pursuing a second career in health care, starting with his wife, Choron Ryan. Ryan is an adjunct assistant professor of biological sciences at UAA. Perhaps more importantly, she's the MVP in Morris' journey to becoming a nurse. By watching their son, Emory, keeping her motivated and helping her study, he plans to return the favor while she makes the same transition.

For those looking to take their own leap of faith into the medical field, Morris has some advice:

"I encourage anyone who wants to get into the health care field to not be afraid and to make that leap," he says. "It's hard to go from a comfortable job where you know what to expect. Anyone who's curious should try the prerequisites, and if it seems like something you're interested in, then go for it. It's a fantastic field to be in, whether it's a doctor, nurse or anything else."

"Taking a leap of faith from courthouse to hospital" is licensed under a Creative Commons Attribution-NonCommercial 4.0 International License.