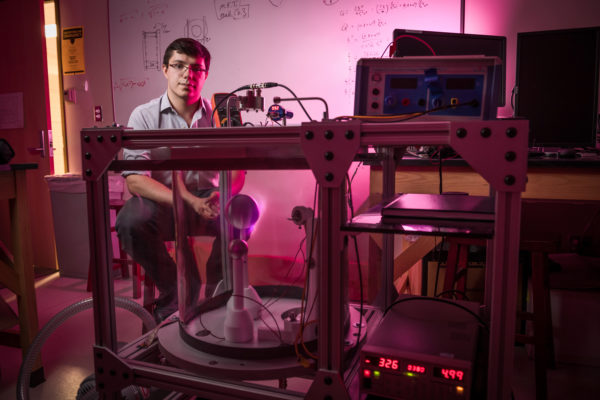 Henrique Miller, a UAA junior double majoring in electrical engineering and mathematics, and double minoring in physics and mechanical engineering, is the recipient of the prestigious Goldwater Scholarship. The honor is awarded to students with promising careers in the fields of natural sciences, mathematics and engineering. (Photo by James Evans / University Advancement)

By the time UAA junior Henrique Miller had reached the end of elementary school, he was advancing so quickly that his small hometown school in Talkeetna couldn't keep up with their eager pupil, so he and his family turned to homeschooling. Now, he's at UAA double majoring in electrical engineering and mathematics, and double minoring in physics and mechanical engineering.

Miller recently received the prestigious Goldwater Scholarship, an honor awarded to college sophomores and juniors who intend to pursue careers in the natural sciences, mathematics and engineering. He says he's had a lifelong love of learning and has always been curious about the world around him. In his youth, math and the sciences excited him, but it was when he was introduced to UAA's Alaska Native Science and Engineering Program (ANSEP) that he felt he'd discovered his educational passion in life.

"It [ANSEP] started shaping my life toward STEM, which I've always enjoyed, but it could have gone any way up until that point," Miller said of joining ANSEP's summer academies as a junior high school student. "Now that I'm at UAA, I've got involved in the plasma physics lab and will probably now go for a doctorate in plasma physics."

In high school, Miller discovered physics through ANSEP's programs and it fueled his desire to learn more about the fundamental science that aims to achieve understanding of space and time.

Born in Sao Paulo, Brazil, Miller and his mother immigrated to the United States, moving to Alaska when he was 3 years old. Miller's father was from Alaska and met his mother on a trip to Brazil. The two fell in love and the three relocated to the Last Frontier.

Miller is no stranger to the frontier, both in life and in his pursuit of science. Growing up in Talkeetna, he learned about the outdoors from his father, and how to look up to the sky and capture the Northern Lights through photography with his mother. But once Miller discovered physics in high school, it opened his eyes to a whole world he didn't know existed and one that he's been pursuing ever since.

"It's not all done," said Miller of why physics is so exciting to him. He said although there's been a lot of advancement in the field, there's still so much to learn and discover. He hopes to one day be on the forefront, contributing to the field in a meaningful way. "There's plenty of different subject areas in physics where there's plenty of questions and we don't know what's going on, and if we learn, we can apply that information. Other fields of study I never felt that much open ground, that much frontier ground."

Miller continued, saying that plasma physics, specifically nuclear clean fusion energy, is where he'd like to focus his studies, research and energy once he graduates from UAA and goes on to pursue his master's and doctorate degrees. He said plasma physics research is a broad field with many applications from space and astrophysics research, to creating controlled fusion in a laboratory environment. To put it simply, plasma physics is the study of a state of matter comprised of charged particles.

"There's something called fusion energy, not to be confused with nuclear energy from fission - it's the other way around; you take really small things and make them into bigger things," said Miller, adding the example of turning hydrogen into helium. "It's tricky to get right, and they [scientists] haven't been able to make it function and actually produce energy; they have to put energy into the system and don't get a lot out right now. But they have been working on it for decades, and it's a very safe, clean energy source. If it fails, it just turns off."

Miller hopes that one day he will join the scientists who are working to create controllable and viable fusion energy. 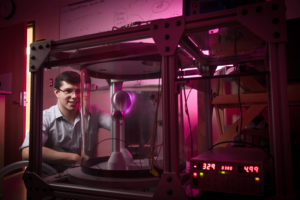 A friend introduced Miller to Nathaniel Hicks, Ph.D., an assistant professor in the UAA Department of Physics and Astronomy. They met in a tiny closet stuffed with electronic equipment and a whiteboard on the first floor of the university's Natural Sciences Building. Miller said he was familiar with Dr. Hicks' work since he'd taken physics courses with him before, but it was there in that windowless room that Miller knew he was in the right place. He went to a meeting Dr. Hicks held for his student researchers, and that was about two and a half years ago.

"This makes it a lot more real and makes me feel like I'm achieving something," Miller said of how his undergraduate research significantly contributes to his overall education. "The learning gets a lot more hands on and tangible."

He said that going to class is great - you learn all the fundamentals, the equations and how everything works, but to witness the equations in action in the lab is a whole new level of learning.

"It really opened my eyes a lot," Miller said. After spending more than two years in the lab, he knows he will be dedicating his career to lab research. "It also just really showed me the applicability of what I was learning."

Miller's undergraduate career at UAA is impressive. His educational pursuits alone keeps him busy, but he's also involved with the university's Honors College. Through his research with Dr. Hicks, he had the opportunity to present at the Annual Conference of the American Physical Society Division of Plasma Physics last November in Portland, Oregon, as well as at UAA's Undergraduate Research Symposium and Discovery Symposium this spring.

Miller has also worked as a math tutor in UAA's Department of Mathematics and Statistics and is currently vice president of the Society of Physics and Astronomy Students at UAA club. Additionally, he was a member of the American Indian Science and Engineering Society, which led to his participation in the First Nations Rocket Launch competition, where he designed the team's electronics and parachute recovery system for the rocket.

Miller said he's enjoyed his UAA experience and is confident that his undergraduate research will help propel him to his graduate school goals.

"This is a fairly big lab and we have anywhere from five to 10 people working here," said Miller of UAA's Plasma Lab. He said because of UAA's size, everyone gets the opportunity to participate in some pretty amazing research - something he doesn't think would happen at a larger school. "If you go to any big school, it's really hard to get undergraduate research because there's thousands of students and they all want research."