New aviation technology director talks about what’s on the horizon 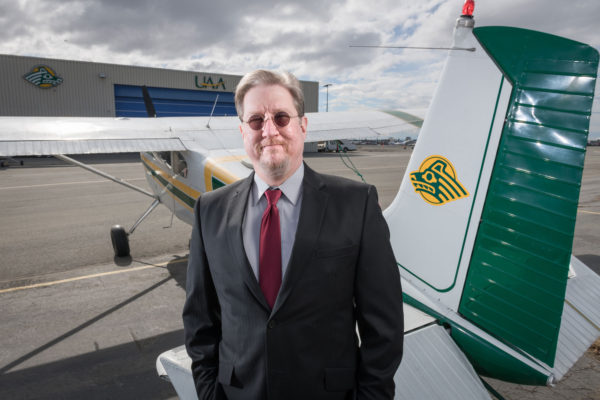 Paul Herrick is the director of the Aviation Technology Division at UAA. While Herrick is still new to the position, taking on the role this past January, he's an established presence at ATD, having worked as a professor for the division for 26 years and even served periodically as interim director and associate dean. In that time, he watched the division grow into the industry pillar it is now while weathering ups and downs in the aviation industry. (Photo by James Evans / University of Alaska Anchorage)

Located a 10-minute drive north from UAA's Main Campus and right on Merrill Field lies the Aviation Technology Center. While the historic Anchorage airport is a natural home for the university's aviation programs, the separation can sometimes make it easy to forget about that corner of campus.

Despite the distance, the Aviation Technology Division (ATD) is anything but an aside. Housed under UAA's Community and Technical College, ATD boasts a nearly 100 percent job placement rate for graduates from all four of its programs: aviation maintenance technology, air traffic control, professional piloting and aviation administration.

"It is unlikely that you can go to an aviation employer in this state and not find a graduate from our programs," says Paul Herrick, UAA's new ATD director. "The way we state it is that everyone who looks for a job, gets a job. You have to not want a job to not get one. Our students' large presence in Alaska aviation is a legacy that we're really proud of."

That legacy includes a whole range of positions with small operators, regional airlines, major air carriers and even the Federal Aviation Administration.

According to Herrick, the main reason for ATD's success is twofold: quality teaching (more about that later) and the interconnectedness and adaptability of all the aviation programs.

For instance, if a student finds they can't commit to the requirements of one program, they can change course and apply their progress to another aviation program within the division. Similarly, students on the aviation maintenance technology certificate track have a pathway to an associate of applied science degree, and air traffic control students can gain additional aircraft dispatcher credentials, giving them an edge that will pay off later in their careers.

"Sometimes students will jump from one program to another to keep themselves in aviation and pursue other certifications on their own terms," explains Herrick.

While Herrick is still new to the director position, taking on the role this past January, he's an established presence at ATD, having worked as a professor for the division for 26 years and even served periodically as interim director and associate dean. In that time, he watched the division grow into the industry pillar it is now while weathering ups and downs in the aviation industry.

"When I first arrived, the building we're sitting in was half the size it is now," Herrick says of the division offices. "That original half of the building, including the hangar, has been here since '81. At that time our air traffic control program was on Orca Street and our piloting program was at Main Campus. In '96, the second half of the building was completed, which made room for all the programs to be under one roof, so we became the one-stop shop for all the aviation programs."

Before coming to UAA, Herrick already had an established career in both aviation and education. After earning a bachelor's in technology with an aviation emphasis from Utah State University, and a master's in engineering technology from Arizona State University, he went to work for a small aircraft design company in St. Louis, Missouri. Unfortunately, Herrick's post-graduation job coincided with what he describes as one of the largest downturns the aviation industry had seen, resulting in a layoff.

Herrick didn't have to wait long or travel far to pivot to a career in education. He became a professor of aviation maintenance at Parks College of St. Louis University. Three years later, the urge to move back west struck, just in time for a teaching position at UAA to pop up on his radar.

These days, Herrick remains in contact with the colleagues he's made over the years from other universities and organizations, and runs into them often at aviation conferences in the Lower 48. When he does, he always makes a point to speak highly of his programs and students.

"The quality of our graduates is well recognized when they get out in the field, and our faculty and staff work hard to see that's the case," gushes Herrick. "Particularly in times like these when the industry is clamoring for people, quality can sometimes be less in the forefront as they try to fill positions. We will always give the industry a quality person they're going to keep for a long time. I truly believe our students will emerge as industry leaders because that's where we focus our attention: strong academics. Not just the specialty of flying, fixing, controlling or managing aircraft, but knowing the entire system."

"New aviation technology director talks about what’s on the horizon" is licensed under a Creative Commons Attribution-NonCommercial 4.0 International License.