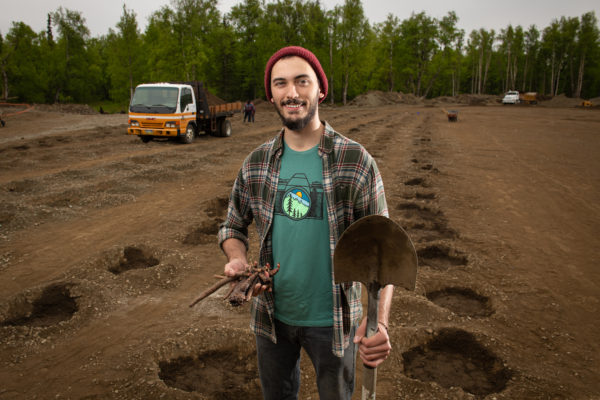 UAA environment and society junior Nicolas Donatelli holds a peony root cutting and shovel as he and his hired hands prepare to plant his first crop of the flowers in Palmer. Donatelli is among a growing number of Alaskan entrepreneurs seeking to capitalize on the high demand for peonies for weddings and Alaska's favorable growing conditions for the flowers. (Photo by James Evans / University of Alaska Anchorage)

View a photo slideshow of Nicolas working on his peony farm.

Below Lazy Mountain, up Wolverine Road in Palmer, Alaska, is 39 acres of undeveloped land that Nicolas Donatelli, a UAA junior pursuing a bachelor's in environment and society with a concentration in geographic information systems, recently purchased and is hopeful that one day, will be a peony farm.

"Environmental issues have become more important in my life, especially after I got into this farm," Donatelli said. "I want to take care of this piece of property that I acquired and make sure that my children have a place to live for many, many years."

The 26-year-old purchased the property about a year and a half ago with his mother, who is also his business partner. His mother's boyfriend, who recently passed away, sent the listing to her in an email as a joke. Donatelli said both his mother and her boyfriend had a love of animals and teasingly sent the property listing as her new "retirement property." He said his mother showed him the listing and he was surprised by the price for the property for the expansive amount of land. It seemed like a good deal to him. So Donatelli started researching the 39-acre property, pulling up topographic maps from the Matanuska-Susitna Borough GIS website to see what the property could offer in terms of crops and farming.

"I was looking at sunlight, among other things, and everything was pointing to development," said Donatelli. "It's the perfect location, not too isolated and all the conditions were just right for potentially building a farm."

After doing a lot of research, Donatelli stumbled across a 2006 University of Alaska Fairbanks study conducted on peony growth in Alaska and how the stunning blooms ranging from baby pink to vibrant fuchsia thrive in our northern climate. Additionally, there's a huge U.S. and world market for the widely popular and in-demand flower, particularly during wedding season. Because peonies tend to bloom later in the state, Alaska's peony farmers have the potential to fill in the gaps when farmers in the Lower 48 or more temperate climates have already yielded their crops for the season. According to Donatelli, peony farms have been popping up statewide since the mid-2000s and have the potential to be the state's next big export. And Donatelli wants in.

"Last year around January is when I really started to try and get this ball rolling," he said of his getting serious about purchasing the property. He knew it was going to be a tremendous amount of work, but with the help of his mother, Donatelli purchased the property. Since then, he has been working any spare minute he has between school and work to get his peony farm up and running.

"The house on this property is much larger than what we need and I don't see myself living here forever, but, it's the perfect setup for a bride and groom to stay in the center [of the house], and then there's two wings, places for family members to stay on either side," he said. "After putting in the effort into developing this area, it could be the perfect destination to bring people into Alaska to get married. There's an amazing view of the mountains and you add some peonies, make everything look nice, and there's a perfect business opportunity here."

Donatelli hopes that one day, his 39-acre property will be a destination for couples near and far to get married on the farm. That's the dream and the end goal for the property, but it's a process and will be a few years before the business side of his dream farm can bloom. Donatelli said he is about two years out until his recently purchased roots from a supplier in Holland will be strong enough to start yielding blooms. He explained that although he's planting this spring and the flowers will bloom right away, that you want to give the root of the flower the time to adjust and really solidly root into the soil before you start harvesting the flowers.

In the meantime, there is still plenty of work to be done, like clearing the land, fixing up the farmhouse and of course tending to the roots, ensuring they are healthy and are prepped for the impending colder Alaska months. But for now, Donatelli is happy to work the land this summer with his mother and his brother, Patrick Cole, who will spend their days along with other friends, toiling under the midnight sun to tend to the roots that will help him grow into his future.

"Planting some roots" is licensed under a Creative Commons Attribution-NonCommercial 4.0 International License.