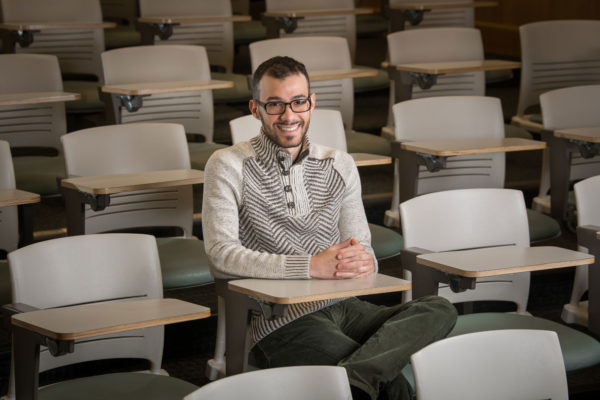 Andres Antuna, B.A. Political Science '18, was recently awarded Humanity in Action's annual John Lewis Fellowship. This July, he will travel to Atlanta, Georgia, and spend one month learning from leaders who have fought for human rights. (Photo by James Evans / University of Alaska Anchorage)

Summer getaways are usually about relaxing. However, UAA political science alumnus Andres Antuna is looking to spend a good chunk of his summer studying human rights, and he couldn't be more thrilled about it.

Antuna was recently awarded Humanity in Action's annual John Lewis Fellowship, named after the iconic civil rights activist. Through the fellowship, Antuna will travel to Atlanta, Georgia, this July and spend one month learning from a variety of leaders who have fought for human rights, including politicians, activists, artists, and possibly John Lewis himself.

Humanity in Action is an educational nonprofit dedicated to fostering the next generation of human rights leaders. Founded in 1997 by historian Judith Goldstein, the organization operates in seven countries that have been the site of historic human rights transgressions: Germany, Poland, Bosnia-Herzegovina, France, Denmark, the Netherlands, and the United States.

Like Lewis, Antuna wants to advocate for people by becoming a lawyer, which is a path he's known he's wanted to follow since he was 14 years old.

"Obviously, it started like with most people where I saw one episode of Law and Order and I was like, 'Oh, this is cool!'" jokes Antuna. "The thing that always struck me is law is basically the end point of politics. It is the thing that politics exists to create. We are a lawful society because a lot of politicians a long time ago decided we need to create rules that everyone can play by. And if you work just in law, then you're really only getting half of the equation."

Antuna credits the inspiration for him to study law and politics as a family affair.

"Both of my parents grew up in the rural countryside of Puerto Rico where the opportunities to chase their passions and support themselves financially were severely limited. They took different paths to get out. My dad chose the military and my mom chose education, and those two things developed my viewpoint of the world," shares Antuna. "My brother is also one of the biggest influences on my life. Ever since I was a kid, people treated my brother and I differently because I look lighter skinned. That's the kind of thing that makes me angry. Politics is what made us that way. Politics, in my view, is what's going to get us to stop being that way. That's why I became a political science major."

Antuna pursued that calling immediately after high school. At the time, his family was stationed in Maryland, so he enrolled at Montgomery College and earned his associate degree in paralegal studies in 2014. 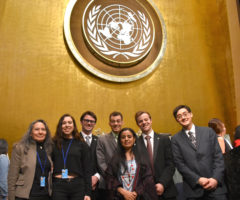 Six months after receiving his new degree, his parents - who moved to Anchorage while he was attending Montgomery - invited him to move up and regroup. Antuna jumped at the chance to come back where his family had been stationed previously. Even more serendipitously, Antuna was involved with Anchorage Youth Court last time he lived here, providing one of his earliest involvements studying law.

Once back in Anchorage, Antuna immediately enrolled at UAA with the express goal of getting a degree that could help him land a job as quickly as possible.

"I always thought I'd be some low level bureaucrat somewhere or low level attorney who was responsible for doing grunt work. I didn't see myself as a leader, because leading is something for others to do," says Antuna.

It didn't take long for Antuna to change his tune. Thanks to an Honors College course taught by Dennis McMillian called Community Service in Theory and Practice, Antuna was reacquainted with his original, altruistic reasons for wanting to study law and politics.

"The conversations [Professor McMillian] was able to inspire us to talk about were the sort of things I wished that I saw on the news all the time." says Antuna. "Things like, how do you promote the interests of a community and the interests of an individual at the same time? How do you run an organization if you are the one responsible for it? How do you decide what it is you're going to do to make a difference in your community? That class completely turned around my career goals. I realized that the thing that I'm passionate about is giving back to my community and helping others."

Newly inspired, Antuna describes one opportunity presenting itself after another. He first got involved on campus as a mentor for the Seawolf Student Success Program. That role gave way to him becoming member secretariat for Model United Nations. Afterward, Antuna was invited to join the executive board of the National Society of Leadership and Success (NSLS). All of that experience made him a perfect fit to become a delegate and senator for Student Government. 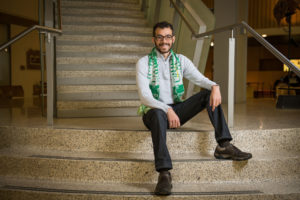 While attending UAA, Antuna was involved with a number of university organizations including the Seawolf Student Success Program, Model United Nations, the National Society of Leadership and Success, and Student Government. Since graduating, he has continued to remain involved with the university through his advocacy work with the Alaska Public Education Matters and UA Strong campaigns. (Photo by James Evans / University of Alaska Anchorage)

According to Antuna, all the opportunities he's received are thanks to the many people who took a chance on him: Tamika Dowdy, Leonidas Medal and Dr. Andre Thorne for inviting him into the Seawolf Success Program; Kimberly Pace for selecting him first as a Model U.N. secretariat member for Romig Middle School's Model U.N., second as undersecretary general of UAA's Model U.N., and finally as one of the four students she sent to the United Nation's Permanent Forum on Indigenous Issues; and finally Gabrielle Agtarap, the former president of the NSLS for encouraging him to take on a leadership role despite Andres thinking he wouldn't be good at it.

"At the end of the day, the only thing that's really exceptional about me is the number of people who had faith that I was able to do something meaningful. The people who encouraged me to apply for things that I never would've considered, I'm eternally grateful to them. I do not think I would've been able to get as far as I did and I don't think I would've been a compelling candidate for this fellowship if it wasn't for them," thanks Antuna.

Even though Antuna has yet to leave for Atlanta, he's already made plans for when he returns. Antuna aims to take everything he's learned during the fellowship and develop an action plan meant to improve civil responsibility and protect minority rights in Alaska over the course of the following year.

Afterward, Antuna's long-term goal is still to go to law school and realize his dream of becoming a lawyer. Although he's still deciding on what kind of lawyer, blaming the many fields of study that interest him.

In the meantime, Antuna plans to keep doing what he's always done, which is to remain involved. For example, since graduating in December 2018, he's helped organize and participate in protests, videos and phonathons for Alaska Public Education Matters and UA Strong. Both campaigns defend the opportunities provided by accessible education and are a response to the ongoing state budget negotiations and proposed cuts to the statewide University of Alaska system budget.

Antuna encourages everyone to do the same, whether they're already entrenched in politics or are looking to dip their toes in the activism pool for the first time.

"If I was talking to somebody who wanted to get involved in politics and didn't know how, the most crucial thing I could tell them is to look around," explains Antuna. "Believe it or not, the things you can do to make a difference in your community are not as broad as a change in a presidency or electing a senator. The things you can do to make immediate beneficial change are usually just something that involves problems that you see. If you pay attention and see where these problems are, that is usually the first step to get involved in your community. It means you are an agent of change. At the end of the day, it's always on the people of the community to decide what kind of community they live in. By being politically active, I believe people are giving themselves the opportunity to advocate on behalf of themselves and others." 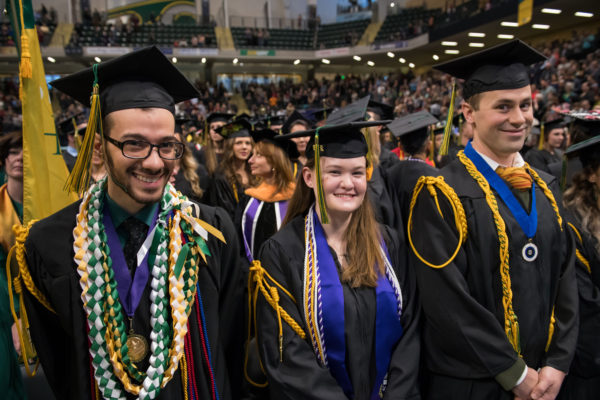 "Political science alumnus excited to build coalitions this summer at Humanity in Action" is licensed under a Creative Commons Attribution-NonCommercial 4.0 International License.