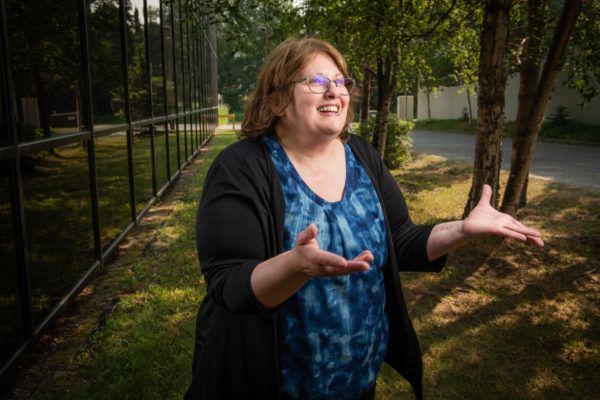 Anthropology alumna Anne Velardi, M.A. '18, recently took home the award for best master's thesis in the field of aging studies from the European Network in Aging Studies. Her thesis, titled "Cultural Age Markers and Differential Treatment Due to Age," aims to uncover the ways society defines people as old, looks at how society is conditioned to internalize perceptions based on age markers, and examines how those perceptions inform how the elderly are treated, particularly when it comes to matters of employment. (Photo by James Evans / University of Alaska Anchorage)

Anne Velardi is on a victory lap.

Shortly after earning her master's degree in anthropology from UAA in December 2018, she won the award for best master's thesis in the field of aging studies from the European Network in Aging Studies. And just last May, Velardi traveled to Peterborough, Canada, to accept the award during the Take Back Aging conference hosted by the Trent Centre for Aging and Society.

"People have always been asking me, 'Why do you want to study old people?'" says Velardi. "When I came there, I felt like I found my tribe. I found my people who understood me. So many of the people that were there I had quoted in my studies, and that was really amazing."

Velardi's thesis, titled "Cultural Age Markers and Differential Treatment Due to Age," aims to uncover the ways society defines people as old via attributes she dubs cultural age markers, and compare how those age markers are perceived by different communities.

According to Velardi, cultural age markers can range from the obvious - like gray hair, wrinkled skin, or impaired vision - to the more subconscious, like elderly people having more experience, being bad with technology, or holding politically conservative views.

In addition to determining the ways we label people as elderly, Velardi's thesis looks at how society is conditioned to internalize perceptions based on age markers. Those perceptions later inform how the elderly are treated, particularly when it comes to matters of employment.

"Judging by magazine ads, wrinkles are the biggest problem affecting Americans today," says Velardi. "One of the interesting things I found is that starting with magazines aimed at 17- to 20-year-olds, every single women's magazine is chock full of ads with age markers for wrinkle cream. So you really see how that's reinforced.

"Also, a job is so important to everyone's life. To suddenly reach a certain age and not be able to get a job, not because of anything you have or haven't done, or can or can't do, but because people have these assumptions about you, that's just very hard on people and I wish I knew the solution to it." 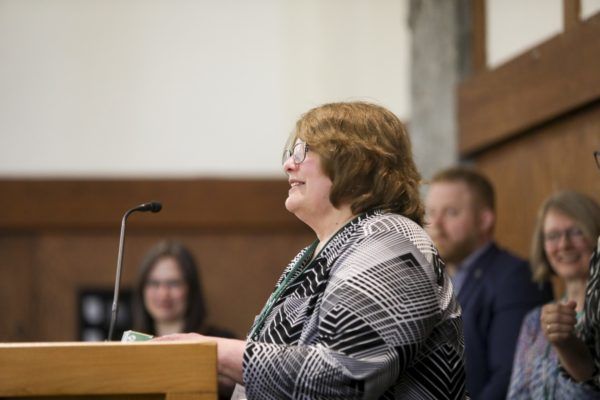 Velardi's thesis is the culmination of nearly three decades working in the Alaska Department of Labor and Workforce Development. There, she helped countless people find employment before noticing an alarming trend in the growing number of elderly people who required her services.

"When I was working in Eagle River and the economy was really good back in the early 2000s, I noticed older people were getting laid off, and nobody else was getting laid off. I finally started asking when people were turning 55. They'd say a week ago. Then I'd ask when they got laid off. They'd say the day after. So it was lots of people and I didn't understand it. One day you're fine, and the next you're persona non grata," says Velardi.

This observation served as the perfect inspiration for Velardi to enroll at UAA and finally pursue her master's. She explains that after originally earning her bachelor's degree in anthropology in 1981 from Stony Brook University, she had always intended to get her master's as well, but never knew what to focus her thesis on.

"When I first started this, I wanted to know why people discriminated against older people. I still don't know why exactly, but I know how," says Velardi. "I want people to understand that what you think about aging isn't necessarily, objectively true. It's an irrational prejudice because we're all going to get old. There's a psychologist named Todd Nelson and he calls it prejudice against your future self."

Speaking of future selves, Velardi intends to publish her thesis as an article or book to further spread education and awareness.