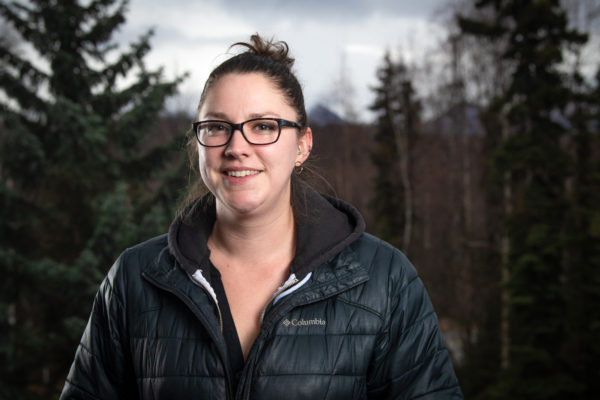 UAA alumna Nicole Sola is on her way to earning her second bachelor's degree in engineering. Over the summer, Sola got a crash course in rocket launching through her internship with Alaska Aerospace. (Photo by James Evans / University of Alaska Anchorage)

When Nicole Sola was perusing the Alaska Space Grant Program website last spring, she noticed a few internship opportunities that piqued her interest, and one in particular she'd never heard of with a company named Alaska Aerospace Corporation.

"Before this internship, honestly, I had never heard of them," said Sola who graduated from UAA in 2012 with a B.A. in international studies. She is back for a second bachelor's degree, a B.S. in electrical engineering. "I didn't know that we had a launch site in Kodiak, I had no idea and I've lived here most of my life."

Sola said she asked her parents about it, who promptly told her, yes, the state has had a launch program on Kodiak island for years. Sola did a little digging and found that Alaska Aerospace has been operating on Kodiak since the late '90s, providing clients with a test site to launch their rockets. She said companies like SpaceX and Vector, wanting to test and launch smaller rockets, contact Alaska Aerospace to schedule a test launch at their facility.

"I thought it would be a good opportunity for me to get the best of both worlds," said Sola. The listing was advertised as an engineering internship, which ended up being a serendipitous opportunity. "And it was - even though I am passionate about astronomy, as an engineering student, I needed some experience - and this was a really good first opportunity to get my foot in the door."

The entire internship program was three months long and Sola, along with another UAA student who was also hired as an intern, split their time between Alaska Aerospace's offices in Anchorage and their launch facility in Kodiak.

"She and I went through the whole experience together, which was kind of nice to have someone else there, because this was a whole new thing to us and we didn't know what we were doing," said Sola. "She and I collaborated on projects - it was great just having someone else."

Sola said the first month in the Anchorage office was spent learning about the company, the projects and getting prepared for month two when she and the other UAA intern would head to Kodiak to work on a launch that was in progress

"In July, we were out at the launch site, learning how launch sites run and what it takes to make that happen," she said. "While we were down there, they had a launch mission, and so we got to be a part of that and we got to see launches. It was the coolest thing."

"At first, when we got down there, it was very hush, hush," said Sola, mostly because of the particular client who Alaska Aerospace was conducting a test launch for. "Now it's out in the open - it was with Israeli Missile Defense - and they had a lot of Israeli government officials down there." 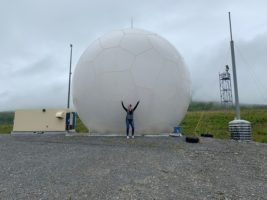 Sola said the launch site was extremely busy, with people hustling about day-in and day-out to prepare for the launch. She said the overall project was working on launching interceptors from Kodiak. At the time, it was a classified project and Sola could not speak about her work with friends and family, but once the launch happened, the knowledge of the project was made public.

"It was cool to see an actual launch site and what they do there," Sola said. She said she never really saw the rockets in-person because of the sensitive nature of the project, but she was able to watch the action from a facility located about two miles from the launch pad on the big day. "It's pretty crazy, there are these really long checklists that people have to go through at the beginning of the day."

She said the actual launch is tedious, slow and painstaking work - there cannot be any mistakes or mishaps when launching a rocket. There are checklists with tasks that have to be ticked off before continuing onto the next and Sola said on launch day, the wakeup call is bright and early to have enough time to finish all the tasks by evening when most of the rockets are launched.

"Different people from all over the launch site are at their desks running through these checklists and communicating with each other, and they have to go through every single step," she said. "This starts about 10 hours before the actual launch. If something goes wrong, or a step is missed, they might have to abort - which is typical for any type of launch - ever."

Sola said for her, the in-depth experience of going through the launch from start to finish was fascinating, mostly because she had never realized all of the hours of precise work that went into completing a launch. She said the process is complex and some of what was being done was far beyond her understanding. There are many factors, like weather, that are analyzed before a launch, but she was thrilled that Alaska Aerospace threw her and the other intern into the mix, so they could experience the entire process. 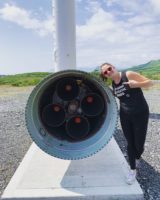 Nicole poses next to one of the rockets Alaska Aerospace launched from their test site in July. (Photo courtesy, Nicole Sola)

In addition to the work at the launch site, she said Alaska Aerospace also has to communicate to state government to make sure the launch area is clear of people because it is located on public lands with a publicly accessible road, as well as notify the Alaska chapter of the U.S. Coast Guard so they are aware of debris that could be falling into the water.

In August, Sola returned to Anchorage after her month-long stay on Kodiak to wrap-up projects she had been working on. She also spent a great deal of time creating STEM education tool kits that could be checked out by different programs and groups to conduct rocket and science experiments.

"We made Alka Seltzer rockets out of old film canisters," said Sola. "Students can use the kit to create a rocket and then launch it. We also added a lot of information about rockets and it was just a cool hands-on way to get the community involved with rockets."

She said of all her projects at Alaska Aerospace, creating the education rocket tool kits was by far the most challenging.

"It was really interesting, the whole launching of the rocket - that was the easy part - but then we had to create the educational materials to go with it," said Sola, who said it's one thing to be able to create and successfully launch an Alka Seltzer rocket, but then going back and putting together a tutorial was the hard part.

For Sola, her internship over the summer checked all the boxes - a unique experience with a cool company, challenging work assignments, launching rockets, and the list could go on - but most valuable it got her foot in the door on a trajectory toward a career she hopes will be fulfilling now and into the future.

"The whole thing was educational," Sola said. "I'm really excited to move forward - not only in my education but in my career."

"Ready to launch" is licensed under a Creative Commons Attribution-NonCommercial 4.0 International License.