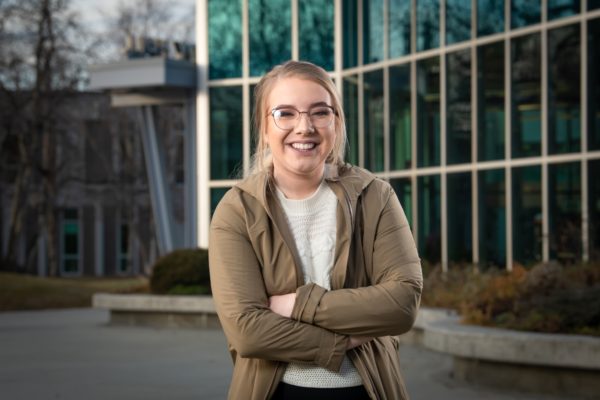 Navigating the scholarship process can induce anxiety in anyone brave enough to attempt it. Not only do you have to find scholarships applicable to you, but there are also forms to fill and essays to write, not to mention the competition applying for those same scholarships.

Legal studies senior Amanda Magnusen knows a thing or two about scholarship application anxiety. As a lead coach for the UAA eWolf ePortfolio program stationed in the UAA Multicultural Center, she helps students navigate what can be a complicated and time-consuming process.

"There's a lot of resources out there, and a lot of people don't have those resources, or even the resources to get to those resources, like mentors that can help lead them in the right direction," said Magnusen. "I wanted to help those people, the students whose parents work two jobs, and they work two jobs, and they're supporting their entire family. There's just a lot and they don't really have time to sit there and write scholarship essays."

Magnusen's insider view was the inspiration behind her recent donation: her own scholarship.

"Overall, the point of me doing this is hoping for a domino effect later on that people see that students can help other students," said Magnusen. "I want to help encourage students. If they have the means to pay for school, there are so many other students who are dealing with things that you don't know about. To start this domino effect of students helping other students and giving back your Seawolf success is so important."

Magnusen donated the scholarship she received as part of being named one of the two 2019 African American, Hispanic, Asian, International and Native American (AHAINA) Students of Excellence. The scholarship comprises a six-credit tuition waiver that amounts to around $2,000 and is annually awarded to two minority students, a male and female, who excel academically and demonstrate advanced leadership qualities.

"I wanted to be part of the process and see how it goes and where it goes," said Magnusen. "$10,000 goes by quick and it's hard when there's all these people. I'd want to give someone $2,000, not just $500, but every amount helps and counts. It was cool to actually be included. They treated me more like a colleague rather than a student that was there giving away money."

In addition to wanting to start a domino effect, donating her scholarship to someone who could put it to better use is indicative of Magnusen's hesitance to waste resources. For instance, instead of relaxing with the free time afforded to her by taking fewer classes during her senior year, she instead opted to add a justice minor to complement her legal studies major.

Born in Kodiak and raised in Unalaska, Magnusen knew she wanted to become a lawyer ever since she was six years old and learned that she liked to argue. Since then, her motivation has evolved to wanting to speak up for those who can't speak for themselves. Magnusen is Tlingit and Alutiiq and hopes to one day work as a lawyer for the Alaska Native corporations.

"It was nice coming to college and knowing exactly what I wanted to major in and what I wanted to do with it, so I had no time to waste," said Magnusen. "Finding who I am and speaking up for myself through different struggles I had in my life, being able to have a voice for people who just don't have a voice and getting that confidence to speak up for others, that really inspired me and motivated me to want to be a lawyer."

As if her class schedule didn't keep her busy enough, Magnusen is enrolled in the University Honors College, plays intramural volleyball, participates in Native Student Council and serves as vice president of the UAA Society of Law and Justice. Somehow, she finds time to study for the LSAT, which she already passed, but she is just hoping to get a higher score.

In addition to her first job with ePortfolio, Magnusen also has a second job with former Alaska senator and former Anchorage mayor Mark Begich. Even though she's set on becoming a lawyer, she enjoys the insight into what other possibilities can stem from a background in legal studies.

"The truth is there's so much you can do with a legal degree. Even though I really want to be a lawyer, there's a lot of different career paths you can go," said Magnusen. "Seeing that side of politics is interesting. It's been a lot of public policy and community development. Plus, it's cool when you have someone like Mark Begich say, 'I want to take you under my wing because I see potential in you.'"

"Scholarship recipient hopes to start a domino effect by paying it forward" is licensed under a Creative Commons Attribution-NonCommercial 4.0 International License.