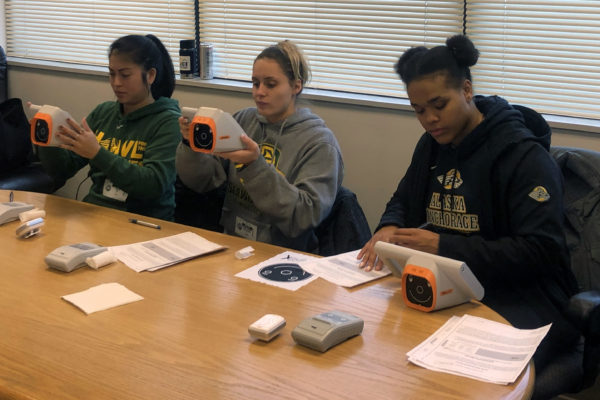 As of May 2019, the Seawolf gymnastics team has volunteered 340 community service hours, with 120 of those conducting weekly vision screenings at Anchorage School District elementary schools with the Anchorage Benton Bay Athletic Lions Club. (Photo courtesy of UAA Athletics)

Usually, the off-season for student-athletes is reserved for training for when the season begins again, as well as returning to activities they otherwise wouldn't have time for during the on-season. For the Seawolf gymnastics team, a large part of the off-season also includes an emphasis on giving back to the community.

With an off-season longer than other athletic programs, the Seawolf gymnastics team spends April through December volunteering with Anchorage organizations including Fast and Female, Special Olympics Alaska and Food Bank of Alaska.

"We want the community to know we support them," said senior Mackenzie Miller. "It's really important to get out there, get to know people, meet new people, make new friends and show how much we care and support everybody in the Anchorage community."

Head women's gymnastics coach Tanya Ho estimates that as of May 2019, the team has volunteered 340 community service hours, with 120 of those being vision screenings with the Lions Club.

Seawolf gymnastics' record of volunteering goes back a long way to even before Ho took over as head coach in August 2017.

"When I took over the program, the team already had this culture of volunteering, so I just tried to keep that up," said Ho. "We want to grow our sport and our fanbase, so us getting out there in the community helps us be seen while doing good in the community."

Volunteering is so woven into the fabric of Seawolf gymnastics to the point where individual student-athletes take an active approach to what organizations the team volunteers with. According to Ho, oftentimes one of the gymnasts will hear about volunteer opportunities and bring them back to the team as something they can all participate in.

As if doing good work in the community wasn't its own reward, volunteering has the added benefit of serving as a team-building exercise.

"We're all doing it together," said junior Isabelle Fox. "A lot of times we volunteer in shifts, so it's not the whole team at once. But it's team bonding because it gives us all something to talk about and we're all experiencing it as a team."