I AM UAA: Daybreak Inc. 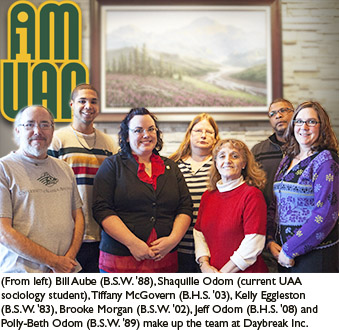 Meet the Daybreak Inc. team. Seven-eighths of their staff are Seawolves. Literally, 7 out of a staff of 8.

Talking to the service coordinators at Daybreak Inc., a mental health services organization in Palmer, Alaska, it is immediately clear that they are passionately people-oriented. Right away, even the term "service coordination" tips you off. It's not "case management" to them, but rather meeting their consumers where they are at and advocating for services for them in their communities.

This team of six UAA grads and one current student (out of a small staff of eight) has deep roots with the university and with their Matanuska-Susitna Valley neighbors.

Starting with their executive director, Bill Aube (pronounced Oh-Bee, which, we're told, is (coincidentally) French for "daybreak"), a 1988 Bachelor of Social Work grad.

Besides the fact that Bill's entire family (wife and four children) hold degrees from UAA, he's taught for 10 years as an adjunct for Mat-Su College and has hosted practicum positions at Daybreak for UAA social work and human services students for upwards of 15 years. He has been with Daybreak since nearly its inception in the mid 1980s, when it was originally established as a housing complex for adults living with mental illness. Over its lifetime, Daybreak has transitioned from the auspices of Alaska Housing Ministries to Valley Residential Services and is a nonprofit along with 10 churches of differing denominations in the Mat-Su Valley overseen by Valley Christian Conference.

Polly-Beth Odom (B.S.W. '89), who has been at Daybreak a few months longer than Bill even, has made her work a family affair. Both her husband, Jeff (B.H.S. '08), and her son, Shaquille (currently a sociology student at UAA), have positions at Daybreak: Jeff as a service coordinator like his wife and Shaq as a resident advisor. Polly herself has helped coordinate the office's participation in UAA's annual Green & Gold Gala, and even won a year's parking permit for Shaq at this year's Gala auction. The subsequent donation has earned her a spot in the College of Fellows, UAA's group of high-giving donors.

Polly and Bill, classmates who went on to graduate degrees at Trinity College and Catholic University respectively, agree: "Daybreak wants the best of the best and we know that if they are a graduate of UAA, that we can expect quality staff ready to enter the workforce running!"

So it's really no surprise that the majority of their service coordinators are former Seawolves, including Tiffany McGovern, B.H.S. '03; Kelly Eggleston, B.S.W. '83; and Brooke Morgan, B.S.W. '01. Each with their own unique story.

Tiffany moved to Alaska in high school when her father came up on a business trip and decided he liked it enough to move his family from Missouri to Wasilla. Upon graduating from Colony High School, Tiffany found UAA to be a natural transition since she didn't want to make a big move again so soon after relocating. She met her husband, Terry, at UAA when they both worked as resident advisors, so Alaska became home even more. She entered the human services field interested in working for the Office of Children's Service, but they weren't hiring when she graduated with her degree. Instead, Daybreak presented a good foot in the door and she's enjoyed it so much, she hasn't looked back. She lauds Daybreak for their flexibility in working while raising a family, which is good because Tiffany and Terry have six kids: two daughters of their own and four foster sons. 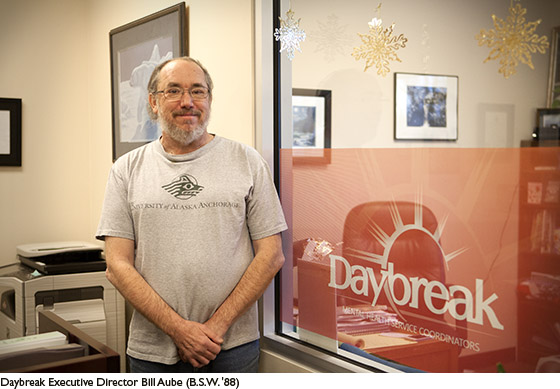 Kelly was born and raised in Anchorage and chose UAA for her undergrad because she knew she wanted to live and work in Alaska. Starting out in the nursing program, Kelly switched to social work when she realized she could have even more interaction with people on a personal everyday level. Her in with Daybreak came through an internship she held with them as she earned her master's degree from Southern New Hampshire University.

"What I enjoy most about Daybreak is the fact that it is consumer choice," she says. "The consumers decide what they want help with and I am given the opportunity to advocate for them and help them to achieve their goals as they determine. Success is measured in their ability to meet their goals not to meet my goals for them."

Brooke spent her formative years in Idaho and Oregon but was always drawn to Alaska and felt that this is where her heart lived. And public service was in her blood: her mom was a Boise City police officer, her father a paramedic, her stepfather a Marine and her sister a nurse. By her mid-20s, divorced but with two beautiful daughters, she made the move the Greatland and immediately knew she wanted to attend UAA for a social work degree. Brooke has since weathered some terrible storms: losing one daughter to suicide and almost losing her oldest to a near fatal car accident. Her spirit shines through, though, when she talks of her uniquely independent practicum during her time at UAA that included lobbying the state legislature for $350K to put toward suicide prevention and lobbying the U.S. Congress for better federal programs for suicide prevention and awareness. She reminds her clients that humor is more therapeutic than anything else. "That's one thing I'm determined to do with every person during the day," she says. "Make them laugh."

"Daybreak is a testament to locally grown, highly trained and educated professionals," says Bill, also a veteran of the U.S. Air Force. "I think we're a good example of that partnership between education and the nonprofit world in Alaska. We've done really well because we've had such qualified people come to work for us."

Passionately people-oriented. Still a student, Shaquille sums it up the best: "Helping individuals, sometimes strangers, with problems — helping them solve those problems — is a great feeling. Daybreak has taught me patience, kindness and newfound respect."

"I AM UAA: Daybreak Inc." is licensed under a Creative Commons Attribution-NonCommercial 4.0 International License.