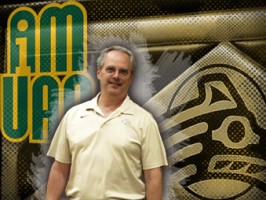 For the past 34 years the University of Alaska Anchorage has been Kevin Silver's home away from home. UAA's associate athletic director has seen the university change, grow and expand from the small community college of the 1970s to the campus it is now, but he feels that the heart of UAA has remained the same-the students.

"I've always been proud to be a Seawolf and an employee at UAA," says Kevin. "I'm excited about what we do here to keep our best students here in Anchorage because they're our best resource."

Kevin's history with the university began in the late 1970s when he first applied to Anchorage Community College and moved over to UAA a year later to pursue his degree in criminal justice management with a political science minor. In the fall of 1978, Kevin applied to be a lifeguard at the sports complex to earn some extra money and didn't realize his student job would turn into a life-long career.

"Back then I was thinking about being a judge or a lawyer and I was going to take it and run, but because I was working at the university, and kept getting promoted from a student to a permanent position-I found out that I liked what was here," says Kevin. "I liked being a staff member on campus. I liked dealing with students and faculty, they were great to work with. After I finished my degree, I decided I was going to stay at the university if they'd have me."

From student to staff

As they say, the rest is history and Kevin has been with the university ever since. In 1982 Kevin graduated from UAA, with a B.S. in criminal justice and minor in political science. He was hired on at the Wells Fargo Sports Complex, named the PE Sports Facility at the time, as the evening/weekend supervisor, maintaining, opening and closing the building each day, and providing the first response in an incident or emergency. Kevin has seen the university evolve over the decades, weathering the transition when UAA absorbed the community college and watching the steady growth of the campus. Kevin takes pride in the building he's maintained all these years and the services he's provided to students and staff who use the sports complex building from the competitive sports teams to intramural and recreational sports users.

"There's a couple of things about athletics and recreation that I really, really love-it's two-fold," says Kevin smiling. "One is that recreation is a benefit to all students, if they can find time to break free, then I'm benefitting them to relieve them of stress of life and academics. The other side of my job is maintaining the Wells Fargo."

He says the 34-year-old Wells Fargo was originally built and intended for recreation and academics, not to house competitive sports and athletic teams. It's a big job maintaining a building that has so many uses, but he feels that he and his staff have done a good job keeping the facility up, and providing the best services they can to the students.

"Maintaining the building is like my home," says Kevin. "I want it to look nice and pleasing to everybody that comes in, because it is the face of what people come to when they come to athletics."

Looking to the future

Kevin is excited and eagerly anticipating the completion of the new Alaska Airlines Center, which will create much needed space for UAA's growing athletics program, for both competitive and recreational teams. He says when the Wells Fargo was built, it was only meant to be a temporary solution and that the university had thought it would build a newer, bigger facility much sooner to house UAA's competitive Seawolf sports. But, because of lack of funding during the oil revenue decline of the 1980s, that vision was put on hold.

"I'm working on the building of the Alaska Airlines Center, that's actually consuming quite a bit of my time, but that has been a goal of mine since we started the process in 1984," says Kevin. "We adapted this facility to accommodate, but it's a poor adaption and the people who got hurt the most were the students. That's why I'm so excited to have a new facility for them."

For now, Kevin continues to maintain, manage and schedule all the events and happenings at the Wells Fargo and when the new Alaska Airlines Center opens in the fall of 2014, he will oversee that facility as well. Although his career path took a sharp turn from criminal justice and the legal world, Kevin knows he followed his heart and turned his passion for athletics and helping students into a fulfilling career. He's seen incredible growth at the university, from humble beginnings to a promising future.

"Athletics and recreation has always been my life," says Kevin, "I've never left this building-this is my home away from home."