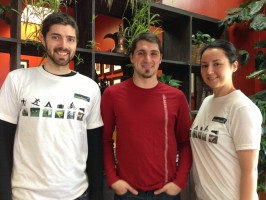 In a bustling Café Del Mundo coffee shop on Northern Lights the typical Sunday morning crowd, books and newspapers in hand, order their usual, and gather for weekly catch-ups. Toward the back of the coffee shop, at one of the round wooden tables, are a group of three-two men and one woman. They've loaded the table with laptops, notebooks and papers. From a distance they appear like any group of college students meeting for a class project-but this group is different-they're not just college students, they're entrepreneurs and their business this morning is all about their fledgling startup, Gearspoke.com.

You may have heard of them by now, the online rental service that provides its customers with outdoor gear and equipment rentals from other outdoor enthusiasts. The company is completely run by UAA students, the result of a 3 Day Startup Alaska competition in 2011 and ever since, they've hit the ground running promoting their brand heavily through social media and word of mouth. They have recently launched their updated website.

"I think it's really exciting because we're part of the peer-to-peer industry and there really isn't anyone in Anchorage-in Alaska that's doing this," said Linda Janes, one of the company's co-founders who is also the chief operations officer and marketer and a current MBA student at UAA. "We're the first of the breed here in Alaska and it's really exciting because people in the Lower-48 are starting to embrace this, and people in Europe are already on board, but here it's a new concept. So, we're really excited to be pioneering this new concept in Alaska."

Gearspoke, an online rental service, is pretty straightforward for those wishing to rent and those wanting to make a quick buck. The site is loaded with ads for rentals, everything from bikes, tents and kayaks to Therm-a-Rests and lawnmowers. Prices range from $5 to $40 a day. Although sites like Craigslist operate under a similar supply/inventory model, Gearspoke offers a more personal experience. The renter and the borrower get to know each other, building trust, and Gearspoke handles the monetary transactions.

The group met two years ago at the University of Alaska Anchorage's 3 Day Startup Alaska event in 2011. The worldwide event, held in many cities across the globe on the same weekend, encourages young entrepreneurs and students to flex their business skills and build a company from the ground up over three days. On the final day of competition, judges evaluate the business ideas. The winning teams earn a small purse of seed money to jumpstart their company.

For Janes and colleagues Paul Davidson, Ryan Nixon and Richard Graves, this student activity seemed like a great way to translate their studies from the classroom to the real world-they just didn't imagine their idea would be so successful.

"That's the whole thing with 3DS Alaska, it brings together the talent pool in one area," said Janes. "There were 12 people who started out and we all basically decided to work on this idea together, we had some other ideas-but this idea-Paul came up with."

Davidson said the inspiration struck him when his friend, who had a truck he rarely used, rented it out to a small construction company to help pay for his insurance for the month.

"I thought that was a great thing," said Davidson. "It was a knowledge transfer situation and we were thinking about technology companies that share information and thought, 'Hey, we could that.' It was just being at Startup and having all these creative people around me-I had the idea while I was there and that's what really triggered it."

His concept took off and the group jumped onto the project with one goal in mind, to create a technology-based business that would serve a need in Alaska. Over three days the group worked madly outlining their business model to complete the project on deadline, took second place at the competition and earned $2,500 to start Gearspoke.

Of the original dozen members, the group whittled down to four. Davidson took the helm as CEO, diving into the company's marketing and business strategy. Janes became COO and worked on marketing, Richard Graves assumed the CTO and technology role, handling the website design and program, and Ryan Nixon joined as front-end coordinator and website interface assistant. 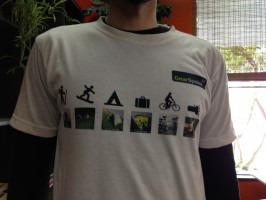 "We waited two weeks for everybody's excitement to settle down a little bit and those who had the time, energy and desire to proceed all met together and coordinated who could do what," Davidson said. "Two weeks after that there was the Alaska Business Plan Competition and Linda and I said, 'We should jump into that and try to get some money,' but it was right in the middle of finals week. We built the business in two weeks, during finals week, and we got money."

For the group, the two years since garnering their first seed money from the competition, has been a whirlwind of school, building the website and executing the business plan.

"We had a lot of whiteboard discussions arguing over whether we go this way or do something different," says Nixon. "Everybody has an opinion."

The group agrees that balancing school, Gearspoke and their regular lives is challenging. Sometimes the most difficult part is trying not to get too hung up on the nitty-gritty details. But the group takes it all in stride and each team member-business partner-is passionate about what they're doing and that makes the long hours bearable.

"I think it's just like anything else you have to manage, you're kind of sacrificing something to do it," Davidson said.

Janes adds, "We're all really busy. Ryan's in a dance company, he's got a really good job and he's doing Gearspoke. We all have full-time jobs."

At this point, each of the group members dedicates about 10 hours-give or take-a week to the company, which doesn't seem like much, but for an undergraduate, two graduate students and a full-time worker, it's a lot to take on.

The long road ahead

These four young entrepreneurs are up for the challenge and you can feel their energy, passion and excitement. Despite having their ups and downs, they mesh well as a team, and it's easy to see the camaraderie and support they provide each other.

"Our longtime vision for this is to have Anchorage as the hub, to start the business, and then have people throughout all of Alaska using Gearspoke and then spreading it to the Lower 48," said Davidson. "Our payoff is a lot of delayed gratification from this company. We won't see any money from this for a long time-longer than other companies."

For some, this financial risk would be a deterrent and perhaps reason enough to not even try. But the four are confident in their skills, excited to put their classroom knowledge to use and feel they are filling a much needed niche in the community for students and young adults who might otherwise not be able to afford and enjoy outdoor activities because of costly gear and equipment.

Janes explains that the group decided to use personal funds rather than take out a small business loan, which seemed much scarier. They're also working on securing support from the 49th State Angel Fund, a program that provides seed money to start-up businesses, but that's a goal for the road ahead.

But for now, the company is focused on getting their business's name out in the community and raising their brand's awareness. Translating what they learned in the classroom to their business has been the ultimate education and hands-on experience. They're excited to push forward, committed to their company and know they have many more round-table, Sunday mornings filled with coffee, innovative ideas and a little bit of fun.