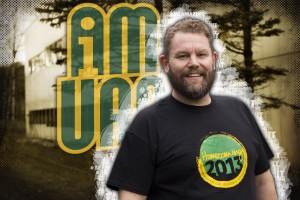 I AM UAA: Andrew Israels-Swenson

Journalism and Public Communications student, '92-'96 Hometown: Morris, Minn. Fun Fact: Made friends with the Indigo Girls and George Clinton and the P-Funk Allstars during his run on UAA's first Concert Board.

Andrew Israels-Swenson had a carpe diem approach to life at UAA when he attended 20 years ago. He "leaned in" before it was hip. He studied journalism and film, wrote and edited at The Northern Light, deejayed for KRUA, worked in Residence Life and was one of the founding members of Concert Board.

"I think UAA has the distinction of being what you make of it. It's definitely a case of you get out of it what you put in," he says.

What to do when everything goes wrong

As a member of the newly-formed Concert Board back in the early '90s, Andrew was excited about their first big-name, sell-out concert: Dennis Miller.

"We sold out the PAC," he says. "On my way to go pick Dennis Miller up from the airport, he cancels." It was devastating.

A military brat who grew up off and on in Alaska, Andrew laughs about the selection of headliners who used to make their way North.

"You used to get, 'Now playing: America!' They hadn't had a hit in years. So it was kind of neat that Dennis Miller was still on Saturday Night Live at the time."

Recovering from that cancelation is one lesson Andrew has never forgotten.

"We had to go stand at the PAC as people were showing up and say, 'We're very sorry, he's ill, he's canceled.' Taking that abuse and putting a smile on your face and not letting it get you down, it sucked beyond belief, but we did all we could do to make sure people were happy," he recalls.

For Homecoming 2013, Andrew was invited back to campus after being away for 17 years, just in time to celebrate one of his early successes, the launch of UAA's A Cappella Festivella. It's been old home week for this small-town Minnesota nonprofit fundraiser as he visits all his favorite people around campus, friends and former colleagues, ex-bosses.

"I told [former adviser] Annie Route today when I stopped over, I learned more from that one experience-in dealing with fundraising and planning events and just different issues I've had during my professional career-what to do when everything falls apart at the last minute and how to scramble and still make sure things are a success," he says.

UAA gets credit for a love connection

Congratulations are in order for this newlywed, too.

There was, quite literally, a drum roll the first time he laid eyes on his now-husband David. They were at a National Association of Collegiate Activities conference in Anaheim and the opening banquet featured a kabuki drummer who encouraged participants to find their own rhythm.

"He was talking about how in Africa if you were out hunting and you heard the rhythm of your tribe being played in a village, you knew you were welcome there. So there are 2,000 people at the banquet badly playing music. And the drummer says, 'Okay, once you've found it, I want you to turn around and teach it to somebody at a different table that you don't know.' I turned around and there was David. And I went, 'Whoa.' And then I went right over to the woman next to him," Andrew says with a laugh.

In spite of his flannel-wearing, mullet-rocking ways ("Actually, it was more of a curly, bi-level thing, like casual gathering in the front, party in back..."), David struck up a conversation with Andrew on the way out.

"And here we are, 19 years later," Andrew says. "I wouldn't be where I am if it weren't for that conference and Concert Board."

Home on the prairie

Andrew and David settled in Morris, Minn., (population: 5,000) about 10 years ago after a long run in Los Angeles.

"Not to brag, but we have two stoplights," he says with a grin. There are folks who still refer to the second one as "the new light." It was installed 22 years ago.

His commute to work now takes three minutes. That's down from two hours each way in L.A., so there's a lot to love about Morris.

"It's really kind of shockingly liberal, too," Andrew says. "I think it's a Scandinavian thing. When my husband and I got married in August, people were so excited. They might be more excited about it than we are. After 18 years, it's such a technicality, though an important one."

Their L.A. friends were originally worried about their plans to move to a small, Midwestern town, concerned that at best things would be boring and at worst, dangerous.

"When we got there people said, 'Oh, you're one of them gay guys,'" Andrew says in a convincing Midwestern accent. "It wasn't like an insult, it was just an adjective. Like, 'You're the curly-haired guy.'"

'Jump up and down on the high wire'

Not in Morris, Minn.

When Andrew graduated from East High School, he wasn't really thinking about college.

"I went out and tried the real world and thought, I want to go to college!" he says.

"It is such an important time in your life to define who you are and find your skills with that safety net. If you mess up, people will be like, OK, we can help you recover from that."

It's what he loved about UAA, that he could throw out crazy ideas like A Cappella Festivella and have it stick.

"It's the time to jump up and down on the high wire because you have some people there to catch you if you fall," he says.

While at UAA, Andrew also had the opportunity to work as a resident advisor, or RA. He's still fielding Facebook friend requests from students he met during his tenure in Templewood. Granted, he does seem memorable.

"During Spring Break one year we took a van full of students and went to Homer for lunch. And came back the same day," he remembers. "And the window broke on the way back. A student tried to close it and it hit just right and shattered. So we drove back from Homer with a flapping trash bag up there. We had the heat cranked, everybody was in their gloves and we were huddled, saying 'Happy Spring Break!'"

"I'm still friends with people who went on that trip and they're like, 'Remember? It was so cold! That was so great.'"

Surviving the elements is part of what makes an enduring community at UAA, he says. His cohort banded together to weather earthquakes, volcanoes and celebrity drama, to name just a few memory-making travails.