UAA and agency scientists: What it means to live in 'moose country' 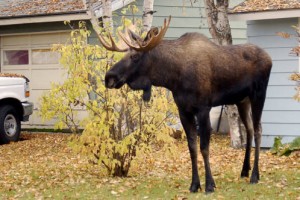 Within the past five weeks, Kincaid Park saw the deaths of two moose that were shot after encounters with park users. The news surprised, if not shocked. Local outdoors writers and enthusiasts traded opinions on what the shootings say about moose and about humans. Readers weighed in with plenty of their own thoughts.

I came away wishing for more information. Are the moose in Kincaid getting more aggressive? Are there more of them now than before? Who manages the moose in the park? Should the park be closed during rut and calving? Is the addition of single-track bicycle trails stressing moose?

For help, I invited local biologists from UAA, the Cooperative Extension Service and the Alaska Department of Fish and Game-current and retired-to sit down for a conversation on moose in general, and Kincaid in particular. I asked seven scientists; four were able to participate.

They included ecologist Doug Causey and biology instructor and moose foraging expert Lauren Caruso from UAA; Gino Graziano of the extension service, who studies the interaction of moose with invasive chokecherry trees; and Rick Sinnott, retired from years of wrangling Anchorage's urban moose and human interactions for the Alaska Department of Fish and Game.

To a person, these scientists advocated much more moose awareness among the general populace-from knowing what specific moose behavior may mean, to understanding the yearly cycle for moose and how that affects their stress levels. As Caruso put it, "Put on your moose goggles," or, from Sinnott, "The only place you're safe from moose in Anchorage is on the airport runway," (and only because a wildlife team works 24/7 to keep moose and all other animals cleared for aviation safety reasons.)

Here's some of what these experts offered.

What signals do moose give when seriously agitated?

The best way to tell if a moose is agitated is if it licks its lips. People think of raised hackles and ears pinned back, but the mama moose that stomped a man at UAA in 1995 was licking its lips well before. Once she attacked, the hackles were up and the ears were back, but first she was nervous and agitated, licking her lips.

Is it OK to run from a moose?

Yes! Moose are different from bears; they are herbivores, not carnivores. You won't trigger a predator-prey chase by running away. In fact, just stopping your approach and backing off when you see one can de-escalate a situation. When you go around a  moose, go way around, even out of the moose's sight.

If charged, put a tree, a car, or anything large between you and an attacking moose because humans can maneuver around a fixed object faster than a moose. When you leave your house on dark winter mornings, look both ways before stepping out, especially if moose frequent your neighborhood.

Is there a management plan for moose in Kincaid Park?

The city owns and manages all the parks and greenbelts in Anchorage. They don't manage the moose; their role is public safety. Fish & Game manages the moose. And, seemingly, says Sinnott, "never the twain shall meet."

Sinnott: "Regarding some recreational groups, the people have a lot of drive and verve and they're excited about their sport. They have lots of money, volunteers, people to do the work. They go to the city and say, 'We will put in all the trails, and we'll do it for free,' and the city says, 'Go right ahead.' And we (moose managers at the Alaska Department of Fish & Game) find out about it later."

That begs the question, are the single-track trails in Kincaid stressing moose?

Likely they have compounded the problem. Moose get used to the idea that if they stay in a wooded hollow between two big trails, it's quiet in there and they're safe. On the north side of the park, near the archery range, lots of moose calve there. Now you have bikes screaming through. At the very least, it chases them from here to there and they get keyed up.

Should Kincaid Park be closed during rut and calving?

Emphatically no. Users simply need to be aware of how to behave around moose. Race organizers should be willing to stop any race for safety. Rerouting may not be the answer, since moose keep moving and may just show up on another trail. The rule of thumb: In a park and on a street, moose have the right-of-way.

Are there more moose in Kincaid? In Anchorage?

No. Kincaid aerials counts aren't done due to proximity to the Ted Stevens International Airport. However, Sinnott says that several severe winters in a row, plus continuing loss of moose habitat, have trimmed populations throughout the city. He estimates in winter there are no more than 700 in the bowl, fewer than even a decade ago.

When are moose most irritable?

Moose, scientists said, are on a near starvation diet most of the winter. In fall they're transitioning from leaves to twigs, "and nobody likes to eat twigs." But food and noise stress don't necessarily add up to aggressive moose.

A startled moose may react at any time. Moose in rut are aggressive toward each other. While not focused on humans, if you should get too close, one might turn on you, too. During rut, moose make themselves very visible; they should be easy to avoid.

A cow moose with a young calf is the most dangerous moose. The most hazardous time is when calves are young, mid-may through July.

Note: A version of this story by Kathleen McCoy appeared Oct. 27, 2013 in the Anchorage Daily News.

"UAA and agency scientists: What it means to live in 'moose country'" is licensed under a Creative Commons Attribution-NonCommercial 4.0 International License.