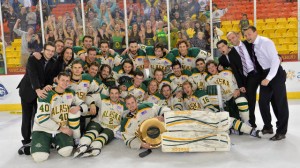 Anyone who attended this year's Kendall Classic can tell you, there's new energy on the ice and in the stands.

"It's very exciting," says Brush Christiansen, founder and first coach of the hockey program at UAA. "I feel like they have a good coach who is doing a great job. His enthusiasm is going to pass on to the players and give them a good shot in the arm."

Senior forward and assistant captain Jordan Kwas is in his fourth season with Seawolf Hockey and he agrees that things are looking brighter.

"I guess in the past there hasn't been much to celebrate," he says. "But it's the start of the season and we're 3 and 1 right now. You can already tell that things are starting to change. People are excited. We're way more proud. Everyone has a more positive attitude."

Head Coach Matt Thomas, who is making his return to college hockey after nine years with the ECHL, is focused on perpetuating that energy.

"I think whenever there's change, especially in sports, there's always a new excitement," he says. "Right away, you build to that."

He knows winning games is the surest way to fill more seats at the Sullivan Arena, but his goal for the team right now, he says, is to make sure they continue to be competitive every night and play with a passion that the crowd can sense.

"As much as I've got this grand picture of winning a national championship at the end of the year, those nights usually end with me waking up and my alarm going off," he says with a good-natured laugh. "But, really, why can't we think that way? The only way we ever get there is to learn how to win now, on a Friday night. Then again on a Saturday night. If we can learn those lessons, we'll be a team that can play in the NCAA tournament."

Leaders on the ice, mentors in the community 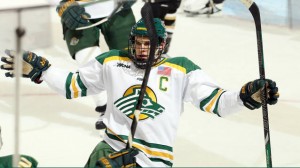 Coach Thomas's one-game-at-a-time philosophy is echoed by his dynamic coaching staff and his team captains.

"I try to preach take it day by day," says Matt Bailey, senior team captain who is also entering his fourth season as a Seawolf. "It's easy to be a leader when you really respect your leaders. It's been an honor to be a captain and try to be an extension of Matt Thomas, but also a leader of our team."

The optimism is infectious and has made its way from coach to community to team.

"Matt's been great, he's a very high-energy, motivational guy," says Bailey. "He's someone that really excites you to be at the rink every day. At the same time, he really expects a lot of us, but everyone really wants to work for him, just because he is such a good guy, you'd almost feel bad if you didn't give it 100 percent."

For his part, Coach Thomas has a lot of respect for the hard work his student-athletes are putting in.

"I can't get over how packed their schedules are. I'm coming from pro hockey and that's a busy schedule, too, but I can't even imagine adding a full load of classes on top of that," he says. "These guys are pretty remarkable."

But it's not stopping Coach Thomas from asking his staff and his team to go the extra mile to engage with the community. 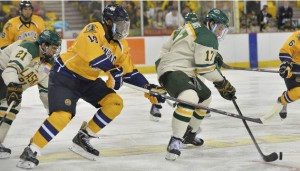 Kwas and Bailey, both Canada-born, know what it means to be part of dynamic hockey towns. They understand the give-and-take, forging connections with the community, youth hockey players in particular, and feeding off the energy of an excited crowd.

"Coming from Canada, and from Manitoba where hockey is just huge, you can definitely tell people in Alaska are hockey fans," says Bailey. "They're knowledgeable people, not just people who go to the game for excitement. They know good hockey and they appreciate seeing good hockey. It's a hockey city here for sure and we just want to put on a good show and start winning some games."

Kwas adds, "As a kid, I didn't get the chance to grow up watching college hockey, but I looked up to the guys in my small town, 15,000 people, who played Junior B, 18-19-year-olds. I aspired to be one of those guys. I was fortunate enough to go past that level."

Both Kwas and Bailey agree that crowd energy really makes a difference for them, particularly in a close game. A new seating configuration at the Sully has pushed fans down into the lower bowl and the boys on the ice are really appreciating the support. It's a boost for them to look out from the bench across the ice and be greeted with a sea of cheering fans.

"What we didn't want to do was have the building look and feel empty," says Coach Thomas. "We want to create an atmosphere that's good for student-athletes, good for the game of college hockey and good for our fans." Their goal, he continues, is to see attendance start to creep back up over the course of the season, lured there by great hockey.

The coach's first months in Alaska have been a whirlwind of meeting new people and connecting with the hockey community and hockey alums.

"Everyone has been so welcoming," he says. "There are so many people who are truly passionate about Seawolf Hockey and I've met almost all of them, I think. They poke their nose in my office when they're walking by and we get a chance to chat, which is great. That's the way I want it."