Major: Anthropology, Native Studies minor, Class of 2015 Hometown: Grew up in Fairbanks, but claims cultural hometowns of Holy Cross on his mother's side and Klukwan on his father's side. Fun Fact: Honored with this year's Roger Lang Youth Leadership Award at AFN 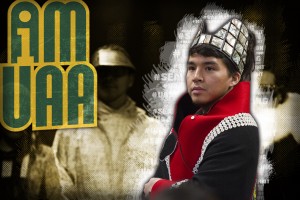 Want to see Kyle Demientieff-Worl's face light up? Just talk about something he loves. For this UAA junior, the answer comes quickly: Alaska Native languages and culture.

In fact, he cracks a wide grin when he describes the language nights he launched this semester in the Gorsuch Commons. First there was a Tlingit night; the night before our interview, he was fresh off the Yupik night he had co-hosted with fluent Yupik speaker, UAA student Olivia Shields.

If you're thinking language class equals whiteboards and tedious drills, you've got it all wrong. Think party! Lots of laughing, and hand gestures-with everything happening in a new language that everyone is just learning.

One activity is like musical chairs, with the fluent speaker tossing out words for body parts to players; players place the correct body part on the chair, whether that's a hand, a rear-end or a foot. All the while, lively music plays. During Yup'ik language night, the musical backdrop was Pamyua.

Kyle is pleased that both nights were a big success, with at least a dozen participants each evening. Preserving language is a passion for him. He is of Tlingit and Athabascan heritage, and the grandson of Alaska anthropologist Dr. Rosita Worl. He says that although his grandmother always talked to him about the importance of family and culture, it wasn't until he moved beyond his family into the larger world that her lessons began to make more sense.

For example, Kyle learned how to organize these language nights from a four-day workshop he took last summer at the Alaska Native Heritage Center, called "Where are your keys?" a program created and taught by Evan Gardner. The title hints at the training style-very interactive and hands-on.

This class was just one of the benefits Kyle gained from his experience at the Alaska Native Heritage Center. He has worked there fulltime for the past five summers, and is on call during the school year for special activities, like Alaska Native games demonstrations, working as a tour guide or helping out with a language circle at the center.

In fact, Kyle's work at the heritage center is the very reason he was honored at this year's AFN convention with the Roger Lang Youth Leadership Award. After working with him several years, his heritage center supervisors nominated him based on the leadership qualities he had developed.

His nomination cited his recognition as "employee of the month three times for his dedication in sharing Alaska Native cultures to visitors. Kyle has led several leadership workshops to teach the values of the games, and is passionate about learning and promoting Native languages by engaging with his community in language revitalization."

His Native games instructor, Casey Ferguson, made these remarks about Kyle's growth as a leader: "Kyle works at the center both as a Native game 'showcaser' and a tour guide for tourists from around the world.

"When giving tours, he makes sure that all of his information is as accurate as possible, and that the guests understand everything that he mentions. He is very willing to help when asked. Not once has he ever denied the request to do what was asked of him.

"Kyle is humble, yet strong-hearted; passionate, yet controlled and respectful. True characteristics that young men should display of any culture the world throughout."

It wasn't always this way, Kyle says. Coming from a large family in Fairbanks, he says he hardly had to stretch beyond his own family for connections. But when he moved to Anchorage for high school at South and Steller, it was a different story. He struggled, he says. He felt like he didn't really fit. So he showed up for classes, but didn't engage in clubs or extracurricular activities. It wasn't much fun.

College started the same way, but luckily at UAA, in the middle of his sophomore year, he found his way to Native Student Services located in Rasmuson Hall. Here, he quickly identified with others who had his same strong family connections and a sense of rootedness to the land.

The group has had a very full first semester, from organizing and modeling for the popular Native regalia review at the opening luncheon for the Alaska Native and Native American Heritage Month, to volunteering en masse at the First Alaskans Institute's second annual Ted Stevens Smokehouse Gala. The student group sewed matching kuspuks for their members so gala-goers would realize they all represented UAA's Native Student Council.

One more major highlight for the whole group came at AFN in Fairbanks this year. We mentioned earlier that Kyle was awarded the Roger Lange Youth Leadership Award there. The Native Student Council traveled as a group to the convention, and attended together.

But what was really special happened when Kyle received his award. He was allowed to invite onto the stage with him members of his family, and members of the Native Student Council. His supporters filled the stage.

To Kyle, who values family and friend connections deeply, this signified that our individual achievements aren't only ours. As he accepted his leadership award, he thanked all who have been there for him over the years. We are able to reach these heights, he explained, because of the support we get from others. 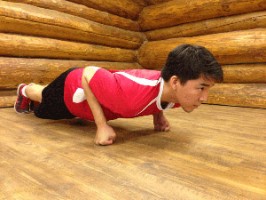 The future looks very bright for this young leader. He's a tough competitor and teacher of Alaska Native games. He follows his father, a champion in the very difficult knuckle hop, but also competes in high kick. Read a story about Kyle and his father and their mutual passion for Native games.

For Kyle, the games are not really about competition, but about values. They instill important traits like perseverance, strength and endurance. They also teach support; it is very common, he says, for competitors to share techniques with each other rather than focusing on winning the match.

Academically, he's also sure of his path now. After his undergraduate degree, he plans to pursue a master's in anthropology with an emphasis in linguistics.

Our advice? Watch for much more from this talented scholar and true champion of Alaska Native language and culture.

Read a story about Kyle and his father and their mutual passion for Native games. See the Native Student Council during their Native dress review. Announcement of 2013 AFN awards, including Kyle's.