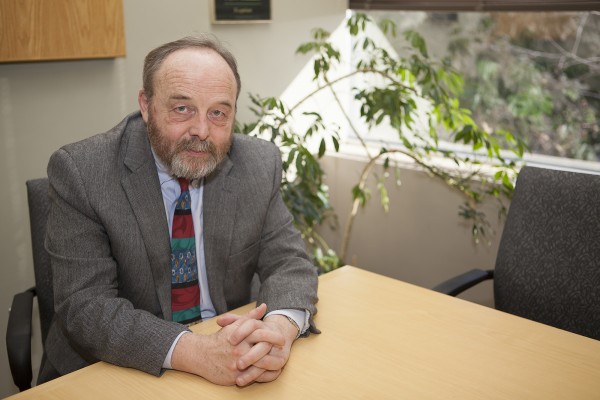 UAA's new provost, Dr. Samuel Gingerich, says his focus will be to help the institution develop a vision for a transformed UAA. (Photo by Philip Hall/University of Alaska Anchorage)

As the fall semester unfolded and UAA launched its search for a new provost, Chancellor Tom Case and outgoing Provost Bear Baker approached an experienced academic administrator already in their midst-Samuel Gingerich-to ask if he might fill the gap for a few months. Gingerich's spouse, Erin Holmes, recently had joined UAA as associate vice provost of Institutional Research; he'd followed her to Alaska as a retiree.

Gingerich agreed to sign on as interim. Meanwhile, the provost search finished and Gingerich became better known at UAA. "At that point in time," Gingerich said, "Chancellor Case and I had another conversation."

In his 30-year career in higher education in South Dakota and Colorado, Gingerich has filled many roles, from professor to chair to vice president. His experience, including weathering economic downturns at other universities, drew the attention of UAA's leadership. In early 2015, as UAA grappled with Alaska's own economic upheavals, Gingerich agreed to step beyond interim and keep the post for two years.

"Sam's leadership experience in higher education will greatly benefit UAA as we move through this year's financial challenges, which are similar to those he's seen in Lower 48 universities," said Tom Case, UAA chancellor.

Gingerich started academic life as a chemistry professor. Thanks to a strong background in math and a good advisor and teacher at Goshen College in Indiana, his near-failure in an organic chemistry class transformed into an incredible challenge and eventually graduate school.

He is the second of five children. His father, "the most numerically gifted person I have ever known," had to leave high school his junior year to run the family farm after his own father was disabled by rheumatic fever. Gingerich's mother, who had an associate degree, joined his dad on the farm. But the mantra for their children was, "Get an education; go somewhere else."

Gingerich and his four sisters complied, pursuing degrees that ranged from chemistry to French to law to wildlife biology. Now all are scattered across the United States.

The following are edited remarks from a conversation with UAA's new provost. The goal is to introduce him more broadly to the campus community and to hear his thinking on challenges facing UAA and all of public higher education.

"I said all along that the best solution for UAA would be to find a provost who could sit in this seat for five years. Long-serving academic officers are the best possible solution. I believe that. I have done this in a range of settings. That 5-7 year commitment is a good range. People who have impacts have to get the lay of the land, marshal resources in support, and then make some decisions about what the agenda will be, what you are going to try and accomplish.

"But this is a transitory time, both for the state, the university system and for this institution. Looking at it realistically, the goal is to help the institution, the academic side of the shop, to develop a vision for a transformed UAA. To make sure the institution is building forward to something, rather than cutting itself to next to nothing. That is the challenge and it is a reasonable thing to do."

On the end of 'expansionist times' and the work ahead:

"There was a time in the '90s and the early-to-mid 2000s when universities were  going to be all things to all people. It was a very expansionist time. That time has passed. And so, public institutions, like all other state agencies, are going to be challenged to find their mission.

"People can accept that that's true, but it is not without some discomfort. If I may use the vernacular, as soon as you start voting people off the island, the people voted off the island get upset. It is a struggle.

"But the challenge really is to build a vision and sense of purpose so the institution understands the decisions that need to be made. The institution has the will to make those decisions and the institution can feel good about its future as well as grieve for what it has lost. I see this as very organic. It is a community going through a transition."

On how change disrupts, from news to higher education:

First news: "This is what I muse about. In education, we talk about the history of ideas. We are using a long lens to look at events. In some way, all those events were once 'local news.'

"The news business has gone through a transition that I saw happen in my own lifetime. I went from living on a farm and getting the daily newspaper from Watertown, 30 miles away, a day late.

Walter Cronkrite was great, but that was a longer lens and less immediate. The defining moment was seeing Jack Ruby shot live on TV; that shocked a generation. Then the whole Kennedy funeral. And the war in Vietnam was suddenly a war on TV. Some of these catastrophic events-space shuttle disasters-those events bind culture together. Now, that is the expectation: All news is immediate.

"Universities evolved around libraries. Libraries were where the books were. Students didn't have access to those books. The faculty had access and their role was to interpret for students the facts and ideas that were in the books. So they could become scholars, too. That's simplistic, but let's go with that model.

"My son is a graduate student in engineering. His experiences have made it clear that the model now is very different.

"Students have taken to capturing lectures from around the world. Students jumped into that [online] network. So now they have a completely different view of their classroom. If the faculty member is not so good at explaining a concept, no one cares because they have access to the same thing from everywhere else. Engineers love to solve problems. Somewhere, an enterprising engineering student has solved that problem, and posted it! And anyone can find it. That makes the whole teaching/learning process different.

"This is changing the whole nature of the enterprise. That gets into the real challenge for universities. We have to be thinking and looking at a future that looks like that. It becomes not about the facts you know, but what you can do with the facts."

Will there always be a place for a four-year university?

There always will be. One of the jobs of public universities is to take 18-year-olds and turn them into 22- and 23-year-old taxpaying citizens. That is the job of the university.

The challenge for institutions like UAA is to determine where that balance is. We have a very small traditional student population. The majority of our students are really looking to UAA to provide them with opportunities. That's where this whole conversation needs to take place. Universities need to think about how they educate and credential.

"The marketplace is in play. Look at the for-profit [higher education] explosion in the last decade. Good, bad or indifferent, what they were able to do points to an incredible weakness in the traditional university model. In my observation, public education has had a hard time establishing clear narrow paths to success. We like to believe there is a maturation process as students wander around and do whatever they want. I think we just provide too many choices.

"The for-profits have a different structure. They say, 'What do you want to be when you grow up?' Front and center. Once that is answered, there is THE path. You don't get to deviate.

On education as a public good vs. a private good:

With the greatest generation, the G.I. Bill, there was no question that it was a public good. Even in the '60 and '70s that was part of the language-Johnson's 'Great Society.' But then in the '80s, and I am not sure how much defaults to us Baby Boomers, but that attitude began to change. You scratch most people in the body politic and their view is that education is a private good.

"Education is a public good. If you look at all the statistics, the middle class and down the economy is stagnating. Part of that is simply the lack of education. A student from the top socio-economic quintile has an 85 percent probability of getting a baccalaureate degree. The bottom quintile has a 15 percent chance. Those numbers aren't exact, but that gap is huge. We have created this environment where we are just replicating and accentuating the disadvantages, generation after generation. The G.I. Bill was the great equalizer...now support for education has stagnated. That's why the Tennessee Experiment and community colleges for all is really a good thing.

What are important skills for a provost to have?

It's all about relationships.

I have to know the nuances of a whole bunch of things, but not the details about anything. Problems and issues come from everywhere. I need to be able to have discussions with people in Bonnie Nygard's shop at CTC about programs they offer. Flip that around and I am talking to Susan Kalina about Russian and what's new in pedagogy in Russian these days.

When people present problems, you listen. And they have to be comfortable that you at least know something about what they are talking about. Knowing a little about a lot is a big asset.

It is an institution that understands that because it is here, citizens in Anchorage and in Alaska get opportunities that they wouldn't get if it wasn't here. UAA's roots are embedded in that idea of opportunity. That is what this is about. That's a big reason why I accepted, to help it stay that way. That was one of the things that made it reasonably easy to do this job longer.

What or who inspires you?

Mostly, it's the enthusiasm of the people I work with. And I am inspired a lot by a sense of purpose that my parents instilled in all of us kids. You are here to do everything you can to make the world a better place, despite the turmoil we all must face.

What do you do for fun?

I like to hike. I want to catch a grayling on a fly so I can check that off my bucket list. Mostly, it's the outdoors.

And the music you listen to?

"A conversation with UAA Provost Samuel Gingerich" is licensed under a Creative Commons Attribution-NonCommercial 4.0 International License.