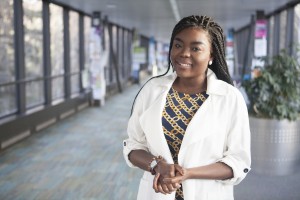 I AM UAA: From first generation college student to Commencement speaker, criminal justice major Ruddy Abam has made the most of UAA, both on campus and off. (Photo by Philip Hall/University of Alaska Anchorage)

Ruddy Abam, a first-generation college student, has excelled both on campus and off. Her passion for social justice assisted her on Diversity Action Council and Judicial Board, while her interest in political science led her to Juneau for a semester as a legislative intern. She's been recognized several times for her contributions to campus-including a Certificate of Appreciation direct from Chancellor Tom Case for her work increasing diversity awareness-and this Sunday she'll add one more accolade as Commencement speaker. Thankfully, she has experience speaking to a crowd; she presented her Honors College thesis at a national conference in Seattle, too.

Ruddy first moved to Anchorage when she was 14. Her father left Cameroon years earlier to seek political asylum, landing in Alaska for job opportunities. Separated from his family, Ruddy's father welcomed foster children into his home before Ruddy, her mother and sister made the move several years later. "We were in a tiny apartment with two bedrooms and about nine people living in the house and it was just really crazy," she laughed. The Abam family continued supporting foster kids throughout Ruddy's time in school. "It's just a really nice experience," she said of the foster connection.

Ruddy's experiences seeking naturalization as a family and growing up with foster siblings have contributed to her interest in American policy. Arriving at UAA, she majored in criminal justice, with minors in political science and psychology, and played an active role in campus policy and judicial affairs.

More recently, her career interests leaned toward civic leadership. In spring 2014, she served as a legislative aide for a semester in Juneau. As a Capitol intern, Ruddy sat in on finance sessions, wrote briefs and prepared the floor session binders for State Rep. David Guttenberg.

"It was intense," Ruddy said of the political crash course, which included headline-grabbing issues like the Knik Arm bridge and gun rights on college campuses. She spent many late nights in the crowded hallways among lobbyists and constituents-not because she was asked to stay, but because she was invested in the process. "As an intern, you could go home. But I wanted to see what else was going on. I think the day before I left, I was there 'til 5 a.m.," she recalled.

Preventing crime at a neighborhood level

Back in Anchorage to complete her senior year, Ruddy started on her Honors College thesis. She's still visibly passionate about her topic, more than a year down the road.

"I wanted to merge my political science and justice backgrounds," she said of her thesis, which tackled criminal justice culture at a neighborhood level. Under the guidance of Justice Center faculty Dr. Cory Lepage, Ruddy explored community-based prevention strategies that inhibit youth susceptibility to crime and juvenile delinquency.

Ruddy knows kids can find trouble in any neighborhood, but marginalized communities-where pawn shops are more visible than libraries, where parents work three jobs-are at far greater risk. She also recognizes courts deal with immediate crimes, and less so with the framework shaping criminality. But that doesn't mean she agrees with the status quo.

"Right now, as it stands, the United States funds imprisonment," she said, comparing the growth in prison funding against education funding. "If you pay so much more money to imprison people, but not an equal amount to educate them, what are your results going to be? Whatever you put your interests and support into, that's the results you'll get out of it."

Ruddy's research investigated everything from big national players like YMCA and Head Start to city-specific gang intervention programs. Across the board, initiatives that kept youth busy-decreasing idle time while opening doors of opportunity-had a significant effect. She combined these case studies with her insights on policy, crafting a proposal to increase government funding. "I was really passionate about it," Ruddy added.

That passion brought her to Seattle this May, where she condensed her 50-page paper to a 15-minute presentation at the Law and Society Association conference. "It was just a fiery room with really brilliant people," she said of the audience. Though she knew her material, she faced an interrogation from veterans of the field. Why is this better than incarceration? Why should we believe it's going to work? "You have to convince these scholarly minds," she recalled. "That was really fun for me."

That high-pressure public speaking will assist her at her next big gig as Commencement speaker. Her message is perseverance and thanks, and she's been building material since freshman year. Like many UAA students, Ruddy worked her way through college-at bakeries, law firms and election campaigns, wrangling carts in the Carrs parking lot, stocking shelves at overnight retail gigs-but she made it to graduation.

"The option to not go to school was so easy for me," she said. "But I met so many students who had the same issue ... It's not always parallel circumstances, but it's a similar struggle."

"It's a thank you message to students," Ruddy said of her Commencement address. "These issues people went through never stopped them from getting their education because that's what mattered to them ... I think most people don't get how hard it is to choose to go. It's intense, but people go, and become and do great things.

"Everybody has the option to just quit or to continue, and you choose to continue. Whether you're getting an art degree or a biological sciences degree, you're a champ. That's what my message is."

Aside from thanking her classmates, Ruddy also singled out two people who helped her here at UAA-her academic advisor Cory Lepage and her former supervisor Theresa Lyons, the director of new student orientation. "It cannot be overstated how important it is to have that support," she said of their mentorship. She also graciously thanked her parents, who lovingly supported her. "I'm thankful that I had all that.

"But mostly, I'm just thankful to be done," she laughed.

The day after Commencement, Ruddy will swap her cap and gown for a backpack and camera and jet off to Cameroon, returning to her home country for the first time in nearly nine years. Joining her mother and sister, the three will reconnect with family and friends and, importantly, recognize the recent losses of grandparents whose funerals they had to miss.

Ruddy has left an impression on campus. Now, with sights set on law school, she'll turn her critical eye, passionate advocacy and community focus to a much larger stage.

"I think my time at UAA has been fantastic," she concluded.