How money messes with our minds 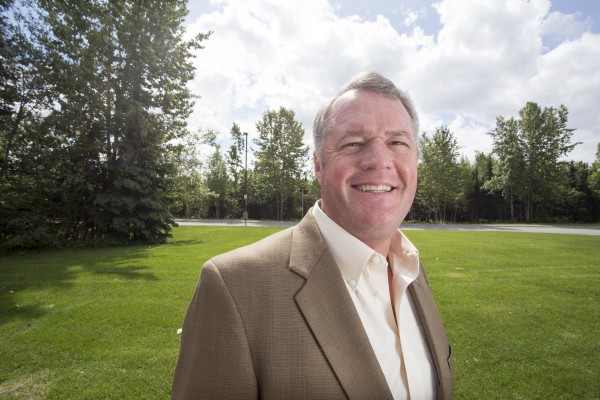 Engineering gave him an advantage when he shifted to finance, but his understanding of human psychology led to best-selling books and an academic career. (Photo by Ted Kincaid/University of Alaska Anchorage)

John Nofsinger, a professor of finance at UAA, should be the life of the party.

He's gregarious, warm-hearted, curious and plenty successful at his work. He's written top-selling books, published more than 50 academic articles and gets quoted all the time in national magazines and newspapers. Just last week, it was the Wall Street Journal /MarketWatch in an article titled "7 Lies Investors Tell Themselves."

And yet, send him to a party and watch what happens.

Introduce him as an expert in the psychology of investing, and before you know it, fellow guests sidle up with their questions. They ask what he thinks about this company or that company. They quote technical things, like the P/E (price/earnings) ratios. "It's got a P/E of 19," they'll say, and then watch his face for a reaction.

Nofsinger just listens. Then he asks: "What does that P/E ratio mean to you?"

At first, the person is taken aback. Nofsinger's a finance expert, they think: "Doesn't he even know what a P/E ratio is?"

Of course he does. But he wants to know what the P/E ratio means to the person who just quoted it. "What does 19 mean to you?" he presses.

"Well, a few questions like that," Nofsinger says, "and I am usually alone at the party..." He follows that with a big, generous laugh. Only he's serious.

In his view, the Internet and 24/7 news cycles provide us with a lot of information, but "that information does not give you wisdom."

An example: "If I flip a coin a whole bunch of times, heads to tails, and write it all out, does that tell you what the next flip of the coin is going to be? Heck no."

People are tricked into thinking that-because they've absorbed a lot of information-they actually know something. Wisdom is a slower process that comes with reading, thinking, learning-and being patient.

But what do we do instead, especially when it comes to money and investing? Often, we overreact. Just think back to the financial crash of 2008 and the way people behaved. "Extreme" is Nofsinger's word for it.

He talks about people who took all their money out of the stock market. "I call that the snake bite reaction. You recoil, and say you'll never go outside again!"

A different reaction to a big loss is to "double down." Sometimes when people lose money, they become willing to take a bet that's even worse than flipping a coin, just because they want to break even.

"People say this to me all the time: 'If it would just go back up to what I paid for it, I would sell it.' Well, that's a ringing endorsement of that company! If you don't have any faith in the company, maybe you should just sell it."

The psychology at play here is that we love to win (and so we sell our stocks when their prices go up, just so we can get the "win" of making that money). And we hate to lose. So when stocks plummet, we hang on to them (hoping for some redemption).

Nofsinger sees our human foibles very clearly, but in business school, he found that few traditionalists had an appetite for exploring how our psychology affects our money decisions.

"When I was reading the traditional papers in finance, they always said, "People are going to make rational, thoughtful decisions because money is involved."

It puzzled Nofsinger to no end. "Try substituting love for money: 'People will always make rational decisions because love is involved.' No one would agree with that. And yet for some people, money can create as powerful an emotion as anything else in their life." 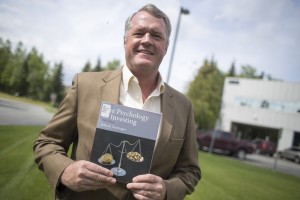 UAA professor of finance, John Nofsinger poses with his book: The Psychology of Investing.

"Then the floodgates opened," Nofsinger said. "The finance and economics journals couldn't get enough." As it happened, Nofsinger produced a book that rode that wave of interest, called "The Psychology of Investing." It became a common assignment in business classes and a must-read in the financial services industry.

Alaska may seem like an odd place to find Nofsinger. He's only been at UAA a year. As it turns out, his wife is Anchorage-raised. They married in her hometown, at then-Elmendorf AFB. After their two sons headed off to college and grad school, they decided to leave Pullman, WA and his job at Western Washington University to head north so she could be near her parents.

So what is the best antidote for the average investor to avoid the pitfalls of our emotions?

Diversify your portfolio, Nofsinger says; adjust it quarterly or annually. "Then go live your life and have fun."

He walks his talk. Even with all his finance background, "I stay away."

"I figure the best thing I can do for my portfolio is to contribute to it," Nofsinger says. "Make some money and put it in there."

A version of this story by Kathleen McCoy appeared Sunday, June 14, 2015 in the Alaska Dispatch News.

"How money messes with our minds" is licensed under a Creative Commons Attribution-NonCommercial 4.0 International License.