How do sharks swallow?

I bet you haven't thought much about that lately. After all, how would pondering this question ever help get you to the bottom of your to-do list today?

But there are some surprises that may just set you back on your heels in wonder. Much differently than fish like halibut or salmon, sharks "shrug their shoulders" to swallow. And, so do we humans. 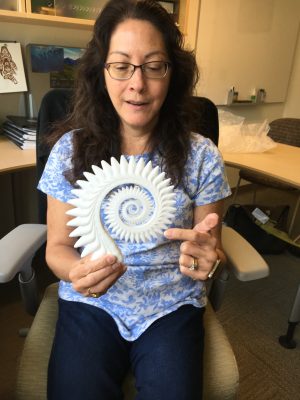 Professor Cheryl Wilga holds a 3-D model of an actual fossilized shark's tooth. This is a single tooth; the many sharp edges are cusps of the same tooth. A new book by Susan Ewing documents how scientists, including Wilga, helped figure out that this single tooth was embedded in the shark's lower lip and used to tear soft flesh. (Photo by Kathleen McCoy / University of Alaska Anchorage)

When I first started tracking down shark expert Dr. Cheryl Wilga, a UAA professor, researcher and director of the Department of Biological Sciences, I read a news article about how she and her colleagues figured this out. That article was based on a scientific research paper published July 19, 2017, in Proceedings B, a Royal Society science journal.

Ariel Camp, one of Wilga's postdoctoral researchers, is the lead author of the study and is currently a postdoctoral researcher at Brown University. The other authors included Elizabeth Brainerd of Brown University, Brad Scott, one of Wilga's master's graduate students, now at the University of Illinois, and Wilga from UAA. This network offers a window into how extensive scientific collaboration can be among scientists from many different institutions.

At first I thought I might know the answer. I figured that upright humans have gravity to help them move food down their throats. Maybe since sharks are horizontal, they have to add some additional movement to squeeze the food along their throat.

Wrong on all counts, I learned. As Wilga explained, water moves food along a shark's throat, so no squeezing is necessary. The paper is based on a study of spotted bamboo sharks. They use their narrow mouth to suction small sea critters out of crevices to feed. As they swallow, their pectoral girdle (or shoulders) shrugs.

Now picture yourself sipping lemonade through a straw. You narrow your mouth and elongate your throat. You might even drop your shoulders a bit to stretch your throat even more for a big gulp. While we look nothing like sharks, our mouths and throats and shoulders can behave in a similar fashion when we ingest food.

Technology made it possible

This was very difficult to figure out. Sharks have skeletons made up of cartilage, which you really can't see very well on an X-ray. So how could the researchers document the movement of food and witness the "shrugging" pectoral girdle?

New technological advances, called XROMM (X-ray Reconstruction of Moving Morphology) allow CT scans and X-rays to be linked up in a final visual illustration. While Wilga joined UAA's faculty in 2016, the research took place earlier at Brown University in Rhode Island. At the time, Wilga was teaching and researching at the University of Rhode Island and collaborating with colleagues at Brown, one of only three universities to have the XROMM technology.

Wilga's return to Alaska completes an inspiring circle. As an Alaska Native, she began her undergraduate career at Kodiak College, doing undergraduate research with a professor studying the bony skeletons of pollock, cod and halibut. That's where she encountered her first shark, a sleeper shark.

When it was time to move beyond her associate degree, her next move depended on her Coast Guard husband's duty station. They ended up in Florida and she finished her bachelor's and pursued her doctorate at the University of South Florida, with sharks as her emphasis. She said the undergraduate research she did at Kodiak College and in Florida allowed her to leap past a master's degree right into a doctoral program. She is very enthusiastic about UAA's emphasis on research for its undergraduates, employing a number of them in her UAA lab.

So how did they get an X-ray to reveal how a shark swallows? Because the shark skeleton is cartilage instead of bone, it doesn't show up on an X-ray. Using the XROMM technology, Wilga implanted several tiny surgical beads at key points in the food and along the shark's swallowing anatomy. Then, the team ran the XROMM equipment in Brainerd's lab, called two-dimensional X-ray or cine-movie.

They started with a shark in a tank of water, tiny beads already implanted. They fed it, and started the cameras rolling.

"You have two cameras that are at two different angles to whatever you are looking at," Wilga explained. "So we take video of the moving X-rays and we can track those beads in two different views. We get three-dimensional because we have two separate views."

But X-rays still can't reveal the shark's anatomy clearly. So the scientists move the shark to a CT scanner, which does reveal the cartilage with the tiny medal beads embedded. They take many images of the shark. Then they combine the images from the CT scan with the video X-ray - linking them up through the visible metal beads. "We essentially make the CT scan move like the video," she said, and the shark's swallowing process is revealed.

With a current grant, Wilga is studying shark cartilage as a skeletal material. Unlike the sucking bamboo sharks in the XROMM research, scientists know that many types of sharks eat sea lions and porpoises and sea turtles. They have to do more than suction their prey in. But without any bones in their body, especially their jaws, how do they manage to "crunch?" "Imagine trying to eat with jaws made out of the stuff that's in your ears and in your nose!" Wilga said.

While sharks do have teeth, their teeth are embedded in their lips, not in the jaws. Scientists have discovered that the exterior of the shark jaw has some structure that may provide necessary force. That structure is a kind of skin made up of small, octagon-shaped mineralized tiles held together with tiny flexible ligaments.

"You can see how that makes the jaw stronger," Wilga said. "If it was just a solid mineralized shell around cartilage, without the ligaments, it would just crack." This ligament-based flexibility allows a shark's jaw to bend and flex.

Wilga is testing the strength on mineralized specimens she obtained from other scientists. "The strength has to do with how much mineralization there is. It happens to be thicker in species that eat more hard things, like crab and scallops and clams. It takes more force to crush something than it does to bite through something that is soft, like muscles."

Wilga is confident that there will be biomedical implications from understanding the structure and strength of these flexible but strong mineralized tiles. The work also feeds her passion for comparative anatomy and invertebrate biology. "I am interested why sharks have this and why sharks look so different and eat different things," she said.

Now that she is in Alaska, Wilga can't wait to get started on studying Alaska sharks, from the spiny dog fish shark to the salmon shark. 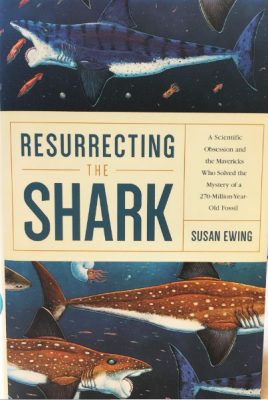 Book jacket for the just released "Resurrecting the Shark" by Susan Ewing. Wilga is one of the scientists who helped solve the mystery behind a fossilized shark tooth. Ray Troll provided illustrations.

While visiting Wilga, I noticed a book on her desk called, "Resurrecting the shark: A scientific obsession and the mavericks who solved the mystery of a 270-million-year-old fossil," by Susan Ewing.

Turns out, Wilga is one of those mavericks who worked to help solve the mystery. As she explained, paleontologists in Idaho found a fossil in a rock. The fossil was of this type of shark's tooth - a single spiraling tooth with many cusps that look more like individual teeth.

While many similar teeth have been found in the fossil record, scientists could not understand how this circular tooth worked. They drew pictures of sharks and imagined it on the upper lip, the lower lip, and even on the tail!

But the scientists in the book, Wilga among them, figured the mystery out. Using CT scans, the scientists were able to discover the jaws that went with the tooth. This single circular tooth would have been embedded in the lower lip of a shark that likely used it to rip through soft tissue. Blocks or stops inside the mouth kept the sharp cusps from puncturing the cranium.

"We think it ate octopi and nautilus arms and bodies," she said. "It certainly could not crush anything."

This work was done before Wilga arrived at UAA, but the book has just come out. And you can see from the 3-D printed sample of the tooth Wilga holds in the photo, the results are fascinating. She holds a single shark tooth model. The oldest part of the tooth is curled inside the spiral, with the newest parts on the outside. All those dagger-looking spikes are cusps of a single shark tooth.

Ketchikan artist Ray Troll had a field day illustrating the book.  The Seward SeaLife Center featured a display inspired by the findings and the artwork of Troll. 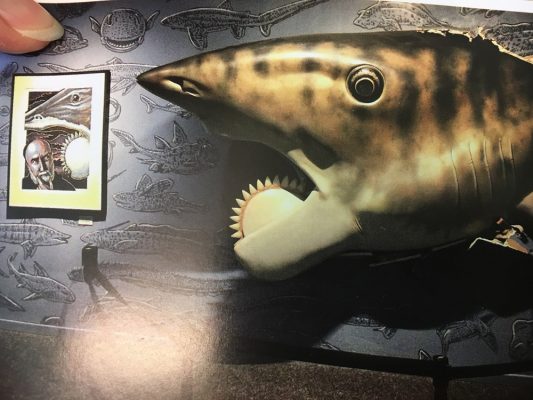 A snapshot of a model of the shark with an embedded circular tooth. This image was a part of the display at the Alaska SeaLife Center in Seward.

Written by Kathleen McCoy for the University of Alaska Anchorage

"How do sharks swallow?" is licensed under a Creative Commons Attribution-NonCommercial 4.0 International License.