Building a safer, healthier Alaska through engineering (and bikes) 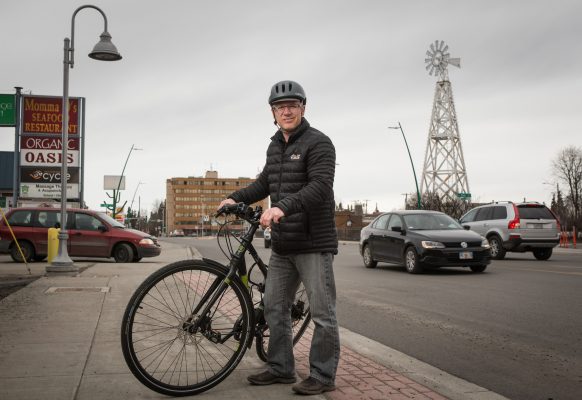 Robert DeVassie '02, a transportation engineer for the Alaska Department of Transportation & Public Facilities, is especially involved in active transport across Alaska. (Photo by James Evans / University of Alaska Anchorage)

For anyone who knew Robert DeVassie '02 in college, his current level of involvement shouldn't be a surprise. At UAA, he led the Institute of Transportation Engineers (ITE) student chapter, served as UAA homecoming king (which is maybe how he met his wife, who also graduated from UAA) and did a semester exchange to Anchorage's sister city Magadan, Russia.

Robert remains busy today. He's deeply invested in making Alaska healthier, safer and more accessible, both as an engineer and through his involvement with nonmotorized initiatives and advisory groups (think walking, cycling and the trails that make it possible).

"I'm hoping I'm able to bring a lot of knowledge and experience with me, both ways," he said of the collaboration between his committees and his career. The perspective he gains from Bike Anchorage, for example, he can bring back to his job at Alaska Department of Transportation & Public Facilities (DOT&PF), and vice versa, he said.

Robert has worked for the state since 1998, and for the DOT&PF's highway section since 2005. As an engineer, he looks at designing roadways for all users, ages and abilities.

Outside of work, Robert previously served as president of ITE's Alaska section and created its active transportation committee last fall (and was named 2016 ITE Alaska Engineer of the Year). He's a member of the Anchorage Park Foundation's trail initiative and joined the board of Bike Anchorage this spring. He's a member of the Alaska Statewide Bicycle and Pedestrian Master Plan and sits on three Anchorage transportation advisory groups (for air quality, nonmotorized and complete streets).

His April was exceptionally busy. He represented Anchorage at a weeklong Walkability Action Institute conference in Atlanta (Anchorage was one of nine cities selected to attend) and presented at the Alaska Statewide Trails conference. In between, he assessed the capstone presentations of senior engineering majors on behalf of DOT&PF, a mentor role he's filled for the past seven years.

Oh, and he's also a member of the advisory council for Greenroads International.

"It's just one way to get people to think beyond the minimum and to start looking more at the environment, material use, the community, et cetera" he explained. Similar to LEED certification, Greenroads offers a rating system to evaluate transportation projects. Through Robert's efforts, the West Dowling Road connector between Raspberry Road and C Street - which expands the city's bike connectivity - became the DOT&PF's pilot project for Greenroads.

Though he designs for better traffic flow and safety, Robert keeps nonmotorized movement in mind. He's currently part of a design team redesigning the Glenn Highway near the Parks Highway interchange, and they're using that opportunity to add a separated multiuse pathway to Palmer.

That project will also include wayfinding signs that list travel times for both cycling and walking. "It's a little bit more signage, but it gives the user a little bit more information," Robert said. If residents can see how long it takes to bike or walk, that may change someone's mind about how they travel.

"There are a lot of things we can do by changing the environment that ends up changing the culture and later becomes the normal," he said. Many roadway changes are initially met with apprehension or even hostility, he noted, but they are made to improve public safety and health. Think about roundabouts on Huffman Road, which slow traffic and remove conflict points; or decreasing the lanes on Spenard, to make more room for pedestrians and cyclists. Even something as simple as re-angling parking spots at Delaney Park means more cars reverse into spots, where kids climb out facing the park and more drivers look for cyclists before driving out.

"Part of the reason I chose engineering is that I like to be challenged, I like to find different ways to improve something," he said. "A lot of engineers are so used to transportation being car-based," he added, but a separated bike lane or even a wider shoulder can make biking more convenient and safer, which results in less cars, less pollution and more physical activity.

"There are a lot of benefits, as we all know," he added. "Whereas when you're in a car, there are very little benefits."

At DOT&PF, Robert considers how each project will benefit communities for the long term. "Engineers are problem-solvers," he said. "I don't just look at the present time. I'm looking at how my kids and their kids will enjoy Alaska later on."

Don't expect him to slow down; with e-bikes and autonomous cars on the horizon, plus growth of chronic diseases like obesity, the state will need to design and build communities that incorporate a more active, livable and sustainable transportation system.

"Building a safer, healthier Alaska through engineering (and bikes)" is licensed under a Creative Commons Attribution-NonCommercial 4.0 International License.