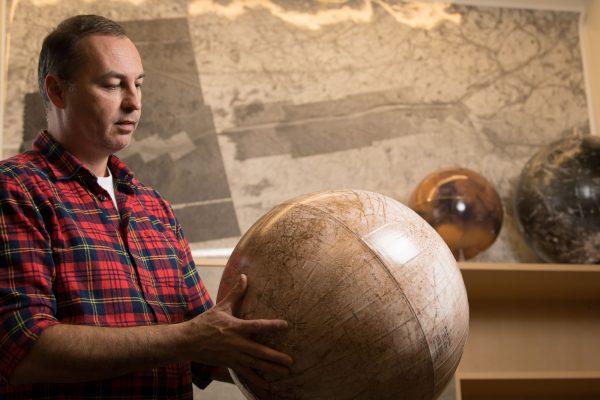 Simon Kattenhorn, professor and director of geological sciences at UAA, holds a globe of Jupiter's moon Europa while standing in front of a topographical map of its surface. This past November, Kattenhorn was invited by NASA to participate as a subject matter expert in their 3-day Europa Clipper planetary protection workshop in Pasadena, California. (Photo by James Evans / University of Alaska Anchorage)

Simon Kattenhorn, Ph.D., didn't write the book on Europa, but he did write a chapter about it for a textbook. Kattenhorn has also published countless papers about the smallest of Jupiter's four Galilean moons, making him the perfect subject matter expert for NASA to invite to participate in their Europa Clipper planetary protection workshop.

"As a scientist who's interested in space exploration and as someone who's devoted a lot of my career thinking about Europa, to actually be invited to contribute to any kind of decision-making is a really cool thing," says Kattenhorn, professor and director of geological sciences at UAA.

In addition to Kattenhorn's overall expertise on Europa, what attracted NASA's attention was a paper he published in 2014 for Nature Geoscience that showed evidence of subduction zones on the moon's surface.

Subduction zones are collision points between two tectonic plates where one moves beneath the other. Earth was previously believed to be the only place in our solar system that had this activity, with one of these collision points located right here in Alaska and responsible for the state's 1964 earthquake.

On Europa, however, Kattenhorn suggests that subduction is caused by the collision of ice plates moving across the surface. Nearly as large as Earth's moon, Europa's surface is a shell of ice 10 to 15 miles thick, which can be hard to imagine with its pinkish hue when viewed from space. Beneath that ice lies a vast saltwater ocean similar to Earth's that runs 40 to 100 miles deep.

Said ocean is of particular interest to NASA and the wider scientific community. "Where there's water there's the potential for life, so it could be a habitable environment," notes Kattenhorn.

That possibility to support life is a driving factor for Europa Clipper, an exploration mission designed to build on what we previously learned about the moon from data gathered by the Voyager spacecraft in the '80s and the Galileo spacecraft in the '90s. 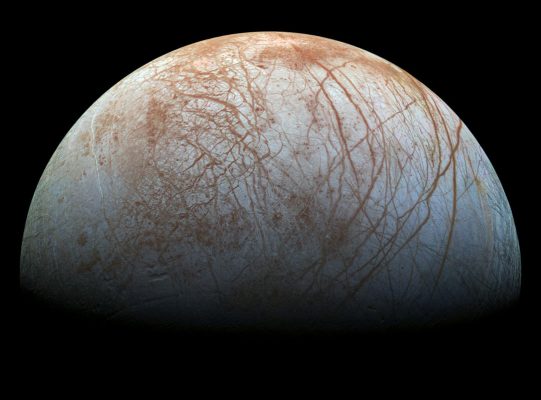 An image of Europa taken by NASA's Galileo spacecraft in the '90s. Kattenhorn explains that the dark lines running across the surface are fractures within the ice caused by Jupiter's gravitational pull. (Image Credit: NASA/JPL-Caltech/SETI Institute)

Scheduled for a July 2023 launch, the Europa Clipper - this time referring to the spacecraft and not the mission - will embark on a 3-year journey to Jupiter. First, it will head in the opposite direction, toward Venus, where it will use that planet's gravity as a slingshot for a faster trajectory into the solar system.

If that sounds familiar to moviegoing audiences, that may be because the maneuver was a pivotal plot point in the 2015 Golden Globe-winning film The Martian. Also, spoiler alert.

After arriving at Jupiter, the spacecraft will begin the process of orbiting the planet 72 times with each orbit taking about two weeks. Of those orbits, 46 of them will fly past Europa at an altitude of about 9 miles above the surface to take photos and collect data.

"Keeping in mind this data would then be transmitted back to Earth and we would probably only see the first data coming back 10 years from now," cautions Kattenhorn, bringing our heads out of the clouds. "We do all this planning now for something we're only going to see scientific results late in our careers. Space exploration is a long term-investment."

The purpose of the planetary protection workshop to which NASA invited Kattenhorn was to ascertain the likelihood of microorganisms on the Europa Clipper spacecraft contaminating the moon's ocean should it crash or unceremoniously land on the surface, both immediately upon impact and within one thousand years.

The reason for caution is twofold: Firstly, any observed microorganisms that hitched a ride on the spacecraft could be mistaken for life native to Europa. Secondly, scientists have no idea how elements that originated on Earth - or wherever the spacecraft picks them up - can affect the moon's ecosystem, bringing to mind some of the worst scenarios depicted in sci-fi stories.

Over the course of three days in November at NASA's Jet Propulsion Lab in Pasadena, California, Kattenhorn, a handful of fellow geologists, several microbiologists and the mission's core science team ran through several models of what Europa Clipper's impact with Europa proper might look like.

"They were understandably very conservative in their assessment, so we were there to give a dose of geological reality of what they can expect," Kattenhorn describes. "Based on what we know of how things work on Europa, the chances of [foreign microorganisms immediately coming into contact with Europa's ocean] are extremely remote."

Put simply, the surface of Europa is too cold for any of its ocean water to stay liquid if it somehow found a way above ground. At 130 degrees Kelvin, Kattenhorn likens it to YouTube videos where people in some of the coldest places on Earth throw boiling water into the air, only for it to freeze the instant it leaves the container.

Even in the event of a crash landing resulting in the formation of a crater, the predicted hole wouldn't be deep enough to put the Europa Clipper anywhere near the underground ocean.

Kattenhorn outlines one scenario where an immediate impact between the spacecraft and the moon's liquid water is possible. If Europa's ocean water were to rise to the surface and erupt as a cryovolcano, the resulting cryolava could travel a distance of a few miles before freezing in a manner of hours rather than seconds. Even then, Kattenhorn mentions the chances of such an event happening is vanishingly small.

"You would have to be the most unfortunate spacecraft ever to hit Europa at the very moment water came up to the surface because it would freeze so quickly it wouldn't be an issue," he explains.

What wasn't determined during the workshop was if foreign microorganisms could eventually come into contact with the underground ocean in the span of one thousand years via Europa's geological processes.

According to Kattenhorn, one thousand years is a reasonable time frame for NASA to consider the potential impact of a spacecraft collision with Europa. The period represents the amount of time the agency expects to remain diligent about not contaminating alien ecosystems before the rest of humanity inevitably makes its way into the stars and operates outside of NASA's control.

In order to answer the thousand-year question, the core Europa Clipper science team will need to develop a process known as subsurface modeling, a computer-generated simulation of the moon's geographical behavior during the next millennium. Building such a model will require some geologic expertise, so NASA has mentioned a continued collaboration with Kattenhorn and one of the other invited geologists long after the third and final day of the workshop.

"I'll still be an active researcher when the data comes back, and I hope to be one of the scientists who's contributing to interpreting that data and learning more about Europa," says Kattenhorn. 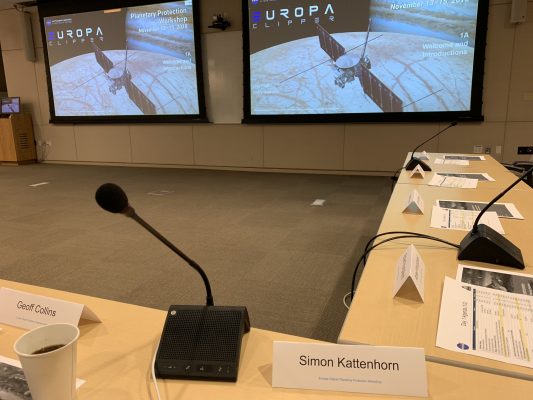 Kattenhorn's view during the Europa Clipper planetary protection workshop in Pasadena, California, this past November. (Photo courtesy of Simon Kattenhorn)