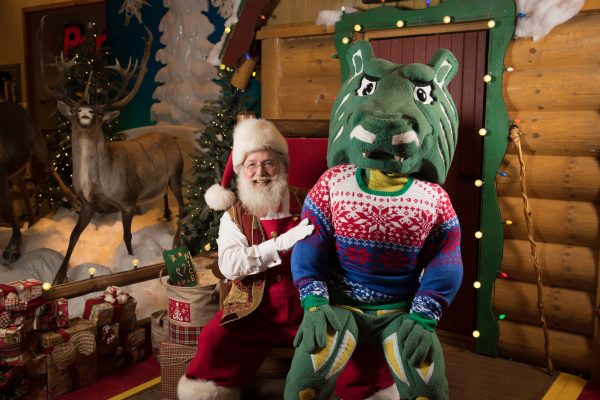 In the summer, Dan Bale, A.A.S. professional piloting '90, is an Alaska bush pilot who has logged more than 19,000 flight hours over the course of his 44-year career. During the winter, Bale is more affectionately known as Santa Dan. (Photo by James Evans / University of Alaska Anchorage)

When the Federal Aviation Administration is feeling particularly cheerful around the holiday season, they'll issue a press release clearing Santa Claus for his annual trip around the world. While the finer points of FAA regulations may fly over the head of - impressionable young readers may want to skip this next part - the real St. Nick, they're deeply familiar to Dan Bale, more affectionately known as Santa Dan.

Bale was already an experienced pilot long before he picked up the reins to Santa's sleigh in 2008. He earned his private pilot's license in 1974, then his commercial pilot's license the following year, and has made his living in the skies ever since. His career has taken him fishing with golden age Hollywood actors across rural Alaska, on the surface of glaciers with foreign dignitaries, and up and down the Aleutian Islands making deliveries. Bale estimates he's logged more than 19,000 flight hours over the course of his 44 years as a pilot.

"Basically I'm an Alaska bush pilot," explains Bale. "My office has a window with a view that always changes. I get to go to different places, and some of those places have no name. It's definitely a road less traveled, but I have a lot of fun doing it."

Despite already having his wings, Bale still made a point of getting a formal education in aviation. He enrolled at UAA the same year he got his private pilot's license and took classes whenever he was on the ground between jobs. Sixteen years later, Bale earned his associate degree in professional piloting in 1990.

"A lot of people tell me they've always wanted to learn to fly, and I say it's a really bad hobby. If you're not good at it and don't keep up, it'll get you. That's why I tell them if you really want to learn how to fly, go to UAA to learn it the right way. You actually do the school work and learn how everything works and why. It's what kept me alive for 44 years of flying airplanes," he says. 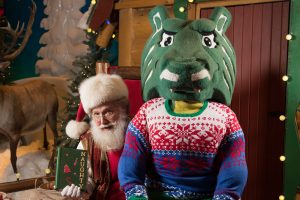 Bale considering whether Spirit should go on the naughty or nice list. (Photo by James Evans / University of Alaska Anchorage)

Those who knew Bale growing up weren't surprised to learn that his career went airborne. One of his fondest childhood pastimes before his family moved to Alaska in 1965 was biking to the runway of New Orleans airport to watch Boeing 707s take off. What was surprising, however, was his decision to become Santa during the winter months when he wasn't piloting.

"You've got to do something in the winter or else you go nuts," advises Bale. "I used to ski, so I would teach skiing in the winter and go fly in the summer. Becoming Santa, I kind of grew into it. The beard was turning grey and I had the appropriate body," he jokingly adds.

In the 10 years since Bale has taken up the role as Santa Dan, he's amassed quite the loyal following. When Bale relocated his workshop from the Mall at Sears - now known as the Midtown Mall - to the newly opened Bass Pro Shop four years ago, many visitors, both children and adults, decided to follow him.

Case in point, when interviewing Bale for this story, a mother and her son came by to take a photo. As if greeting longtime friends, Bale pointed out that this family has been coming to see him since 2012. The mother enthusiastically pulled out six older photos of her son sitting on Santa Dan's lap, the earliest of which featured the boy while he was still wearing diapers. He didn't seem too embarrassed by this showing, though - he was off playing with Legos in the waiting area as soon as Santa handed him a farewell candy cane.

While pilot Bale and Santa Dan have largely been kept separate due to the seasons, the two personas are slowly becoming one and the same. Bale has been known to occasionally wear a brimmed Santa hat when flying during the summer, which usually elicits a chuckle from his passengers.

Bale describes a more illustrative example of the melding of his two professions. 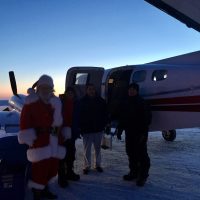 Bale delivering "non-flying" reindeer to the villagers of Anaktuvuk Pass just in time for Thanksgiving. (Photo courtesy of Dan Bale)

"To sum up a long but funny story, three years ago just before Thanksgiving, the villagers of Anaktuvuk Pass weren't wanting to eat turkey and the caribou hadn't come by that season," he recalls. "So I was sent in an empty Cessna 441 in my Santa suit to Nuiqsut where they loaded totes of non-flying reindeer into the back of the plane and I took the non-flying reindeer from Nuiqsut back to Anaktuvuk Pass and unloaded them while still wearing my Santa suit."

Even with his jolly disposition, physical resemblance, tailor-made suit and decades of flight know-how, Bale considers his ability to dispense nuggets of wisdom as what sets him apart from other people to adopt the moniker of Santa Claus. And as a longtime member of the International Brotherhood of Real Bearded Santas, Bale knows many of those people.

"It all comes back to two things: Do something you love and do it the best you can. That's been my creed since the beginning. And I try to be the best Santa. It's a fun job, but whatever you do, if you can't enjoy what you're doing, you're doing the wrong job." 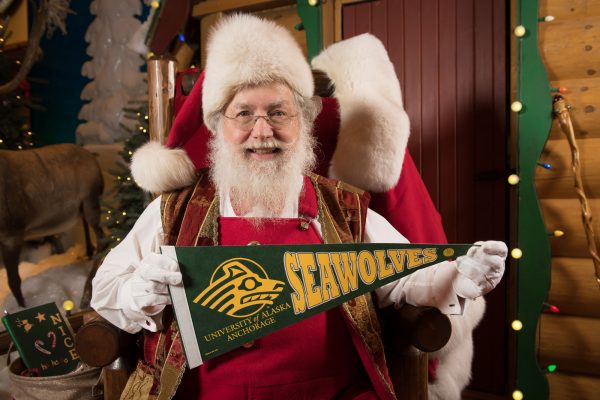