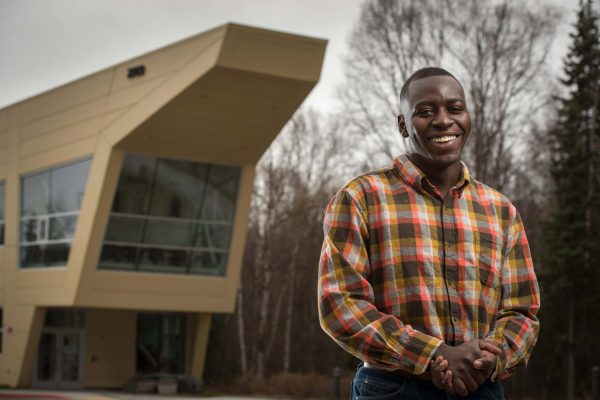 Civil engineering graduate Mohamed Niagne poses in front of UAA's ANSEP Building. Mohamed will begin his career with the U.S. Army Corps of Engineers in May 2018. (Photo by James Evans / University of Alaska Anchorage)

Entering the real world after leaving school can be intimidating, but civil engineering graduate Mohamed Niagne is off to a great start. After recently walking the stage at Spring 2018 Commencement with leadership honors, Mohamed is wasting no time launching his career with the U.S. Army Corps of Engineers.

For the next five years, Mohamed will be working toward earning his professional engineering license by training under a professional engineer. Most of that time will be spent on construction sites around Alaska, overseeing how things are conducted in the field and exploring areas of improvement, which are responsibilities he is enthusiastic about.

"There's a process that everything has to follow, whether it's a body, structure, group or machine," says Mohamed. "I like playing around with those processes and seeing if there are ways to improve how things function."

While he loves that this first position will keep him near family and his favorite Alaska pastimes - namely hunting - Mohamed is looking forward to using his talents around the world, noting that there is work that needs to be done everywhere. His ultimate motivation is to help bring better services to communities, like clean water and energy, while finding safer methods to tap into natural resources.

"Those sorts of issues are very complicated - trying to improve things and make everybody happy without affecting any one person's way of life," acknowledges Mohamed. "But I think that's what civil engineering is, after all."

Mohamed is already quite the traveler. Born in Côte d'Ivoire, he lived there until he was seven before his family relocated to Senegal, finally moving to Alaska in 2010.

Even at a young age, it was apparent that Mohamed's future laid in engineering.

"My parents hated getting me toys," recalls Mohamed. "I'd play with them for a bit, but my favorite part was breaking them down and putting them back together. They'd get upset, but it was a great learning process. Eventually they stopped getting me toys, though."

After the toys stopped coming, Mohamed brought his curiosity to the repair shop next door. In this training ground he learned a new level of resourcefulness as many of the parts that were needed had to be fabricated due to the difficulty of finding those parts in Africa.

This resourcefulness proved useful after the big move to Alaska. Naturally, relocating to an entirely new country comes with obstacles, chief among them being the language barrier. But thanks to the universal nature of math and science, Mohamed was able to apply what he learned back home to make the transition a little easier.

Using his proficiency in math and science, Mohamed volunteered to tutor fellow high schoolers while developing his English. He would continue volunteering on more activities and taking on more leadership responsibilities before finishing high school, welcoming every new opportunity as a chance to learn.

Mohamed gets his willingness to pursue leadership positions and improve the world around him from his grandfather, who took an active role in several committees for the betterment of Côte d'Ivoire. According to Mohamed, all of the traits he aspires to come from watching his grandfather interact with the community, such as his patience, wisdom and optimism.

"If you want change, it has to start with you. My grandfather showed me that," says Mohamed. 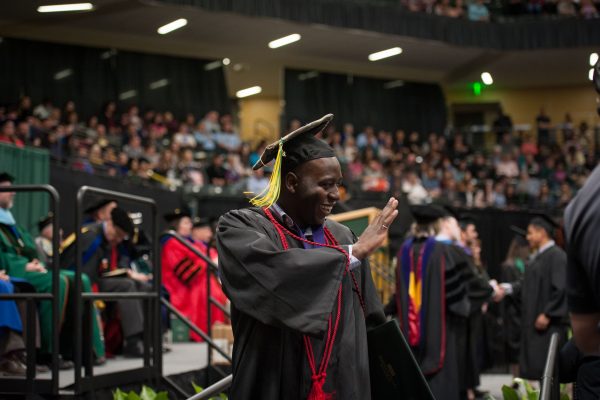 Mohamed started attending UAA in 2013, naturally as a civil engineering major. Also unsurprising is how many organizations he would join, serving as vice president of the Greek Council, brother of Sigma Alpha Epsilon, vice president of the American Indian Science and Engineering Society (AISES), member of the Alaska Native Science and Engineering Program (ANSEP) and member of the African American, Hispanic, Asian, International and Native American (AHAINA) students program.

Before his final year at UAA, Mohamed completed an internship with the U.S. Forest Reserve in the Chugach National Forest. Not only was the position perfect for his enthusiasm toward the preservation of natural resources, but it proved to be a valuable learning experience for someone about to enter the professional engineering world.

"When you study engineering in school, there's always room to recover," describes Mohamed. "When it's work, you can't allow any errors to slip by, so it was a good way to challenge myself."

It is very fitting that Mohamed finish his college career as one of the seven UAA students graduating with leadership honors this year. The leadership honors designation is decided by an external committee of community leaders, and awarded to students who demonstrate academic success, as well as leadership contributions to UAA and the Anchorage community.

"I'm very grateful to be a part of this community and have the opportunity to help it," thanks Mohamed. "It's a great honor."

"Civil engineering and leadership honors grad ready to take on the world" is licensed under a Creative Commons Attribution-NonCommercial 4.0 International License.