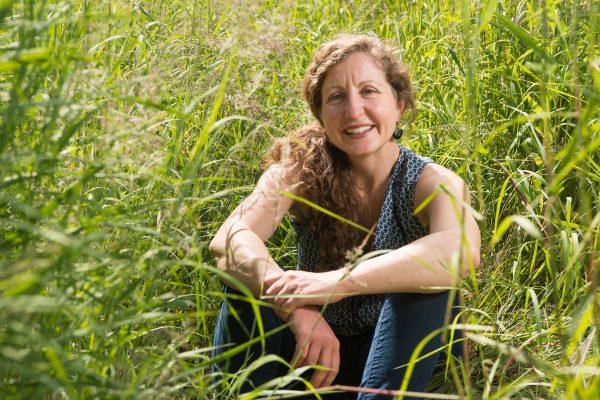 Micah Hahn, assistant professor of environmental health at the Institute for Circumpolar Health Studies, is leading a project to track the arrival and spread of invasive tick species in Alaska. (Photo by James Evans/ University of Alaska Anchorage)

Summer in the Land of the Midnight Sun means Alaskans are hitting trails in full force with family, friends and their canine companions. However, the great outdoors comes with its own risks and happy hikers know to be prepared for whatever may be lurking in the woods, like bears or moose. But what about bugs? And we're not talking about the mosquito kind. Turns out there's something far worse than mosquito bites - and that's being bitten by a tick.

As summers in the state have trended warmer over the last decade or so, the number of tick sightings in Alaska have started to increase. Although the Last Frontier has its own hearty tick populations native to the state, the concern in recent years is that nonnative species found in the Lower 48 may start migrating north.

According to Micah Hahn, an assistant professor of environmental health for the Institute of Circumpolar Health Studies at the University of Alaska Anchorage (UAA), tick research is on the rise. Northern states like New Hampshire, Maine and Vermont, as well as circumpolar north countries like Canada, Norway and Sweden, are tracking ticks where they have not typically been seen before, but have migrated and moved in.

Hahn is new to Alaska, moving up last August after spending three and a half years doing postdoctoral work through a Centers for Disease Control (CDC) and National Center for Atmospheric Research (NCAR) program in Fort Collins, Colorado, where she researched tick-borne diseases. The CDC has been focused on Lyme disease in Minnesota and Hahn was tracking tick movement across the state and where they hunker down during the winter months.

"Before we moved here, I did a lot of work with infectious diseases and climate change, and since moving here, my research is broad, but the general theme is still environmental change and human health," says Hahn, whose academic background is in ecology and epidemiology. "Tick-borne disease is kind of the nexus of humans, animals and the environment." 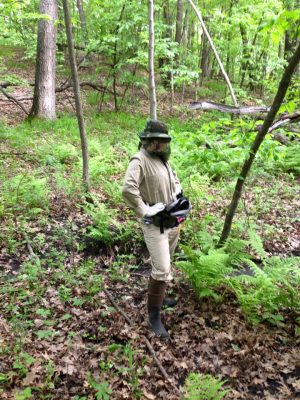 Hahn combs the woods for ticks during her research work with the Centers for Disease Control in Minnesota. (Photo courtesy of Micah Hahn)

After leaving the CDC in Colorado, Hahn thought her tick research days were behind her - especially after moving to Alaska because ticks are not a problem here, right? But one day last fall she stumbled across an article written by Kimberlee Beckmen, wildlife veterinarian for the Alaska Department of Fish & Game (ADF&G), addressing the growing number of ticks in the state. It piqued her interest, so she picked up the phone and called Beckmen to see what was going on.

Beckmen said tick research was a small part of her job and would take any help she could get with tracking ticks in Alaska. So again, Hahn jumped on the tick bandwagon. She reached out to Frank Witmer, an assistant professor of computer science and engineering in UAA's College of Engineering (CoEng), whose extensive background in geography, geographic information systems and computer science could lend a hand in creating a public database for people to report their tick sightings in Alaska. The two co-applied for an Alaska IDeA Network of Biomedical Research Excellence (INBRE) grant to launch a yearlong pilot program, focused on tracking tick populations and movements in Anchorage city parks and Southcentral Alaska this fall. Hahn will be heading into the field this August with a handful of student researchers, carefully combing local city parks and trails where humans, canines and ticks could potentially intersect. Meanwhile, Witmer will be in the computer lab, collecting Hahn's data and developing a tick database to monitor the potential threat of nonnative, invasive ticks migrating in from the Lower 48 or from around the globe.

Before coming to UAA, Witmer's research focused on climate and conflict, specifically in war zones and their consequences. Overall, he said he's always been interested in humans and their environment, and that ticks, although not a violent conflict, are a potential threat to people and mammal populations, especially here in Alaska.

"I've always had an interest to look more into disease modeling, human health and spatial epidemiology within the field of geography," said Witmer. "When Micah came to me with this, I was immediately interested because it is a classic human-environment interaction. It's important to understand habitat suitability for ticks in Alaska and how humans interact with that habitat."

Are you a good tick or a bad tick?

According to Beckmen's paper, Ticks parasitizing dogs, cats, humans and wild vertebrates in Alaska: Invasion potential, there are eight native tick species in Alaska. As of right now, the ticks that inhabit the state are mostly found in Southcentral and prey upon small rodents and rabbits. Potentially harmful ticks carrying Lyme disease and other tick-borne diseases, such as Rocky Mountain spotted fever transmitted from a wood tick and generally found in the East and Southwest, or Helvetica spotted fever found in Switzerland, France and Laos, have not shown up yet in Alaska. However, with a warmer and prolonged spring and summer season, the potential for ticks found in more temperate climates surviving in Alaska is starting to become a real possibility.

Hahn and Beckmen both express concern over the ticks carrying diseases affecting humans and ones that could possibly harm Alaska's unique wildlife populations like wolves, bears and moose.

"When a disease is introduced to a wildlife population, you have to get on it right away if you're going to do any kind of mitigation," said Beckmen. She is especially wary of dermacentor albipictus, also known as the moose winter tick. Beckmen and Hahn expressed the devastating consequences of a moose winter tick invasion in Alaska. Hahn said in states like Maine and New Hampshire, moose populations have plummeted. Moose winter ticks essentially "suck" the moose dry. It's a slow and agonizing death where the moose endures an attack of thousands of ticks living, breeding and reproducing on their body, depleting the moose of its blood supply, causing it to become weak, lose its hair and eventually starve to death. Beckmen's article states that young moose are especially susceptible to moose winter ticks.

"We have a high diversity of small mammals in Alaska and some of the mammal species that we have here are only in Alaska - and we have a segment of the population that is maintaining the global population - so it's important to understand the potential pathogens that are affecting wildlife," Hahn said.

In August Hahn and Witmer will hit the ground running on their tick research in collaboration with ADF&G. Hahn said she is not sure what they will find in Anchorage and Southcentral Alaska's parks and trails - if anything. It's kind of a, if they find something, then they're being proactive in providing valuable research, and if they don't, then no news is good news. 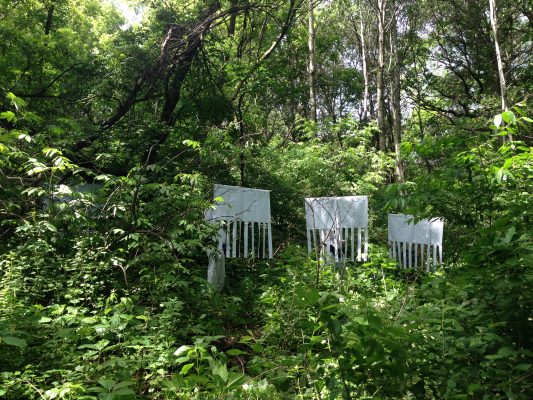 Hahn and her research team set up flags to catch ticks to study their pathogens and movements. (Photo courtesy of Micah Hahn)

"That would be great in terms of health," said Hahn of the possibility of not finding any ticks during the yearlong study. "It's kind of like searching for a needle in a haystack and we're picking these sites - particularly the Anchorage sites - because these are the places specifically where humans and wildlife are coming into contact."

Looking for a tick in a state as big as Alaska is a monumental task and Hahn recognizes the challenge of searching for ticks in the field. She's excited about the field aspect, but says the real help in determining tick migration in the state will come from passive research, like talking to local veterinarians, doctors and nurses who are more likely to come in contact with the bugs in their human and mammal patients.

"This is very preliminary and setting the stage for continuing future research, Hahn said. "It would be great if we didn't find any ticks, but the whole point of this is to set up a surveillance system, so if the first tick has not established yet, that when it does, we're already looking and we can put the kibosh on it before things get out of control."

"A needle in a haystack: UAA researchers are on the hunt for ticks in Alaska" is licensed under a Creative Commons Attribution-NonCommercial 4.0 International License. 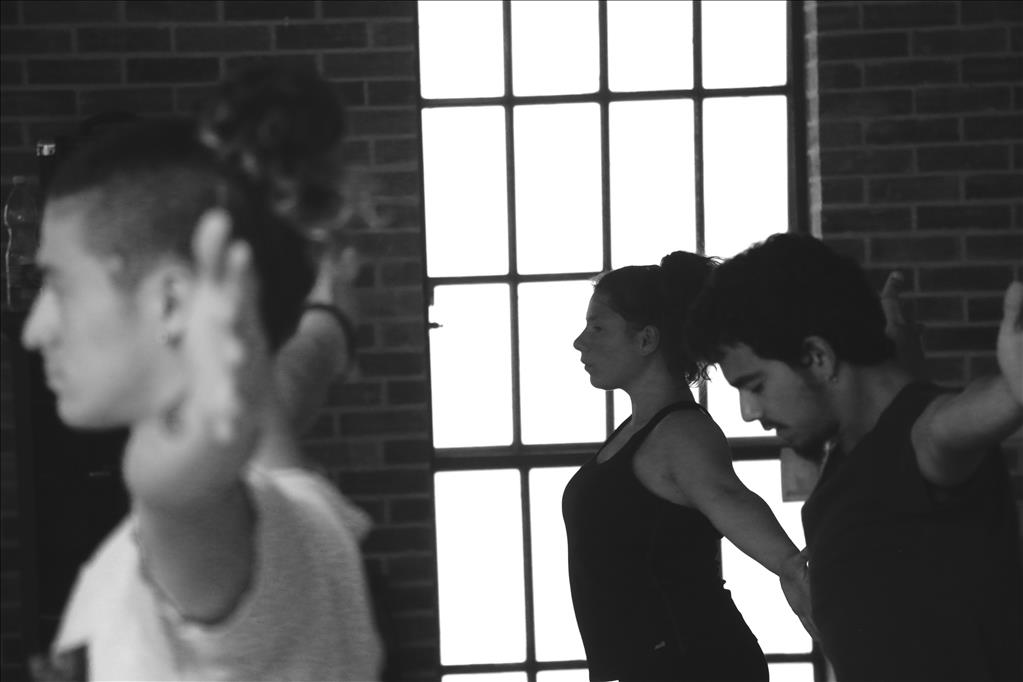 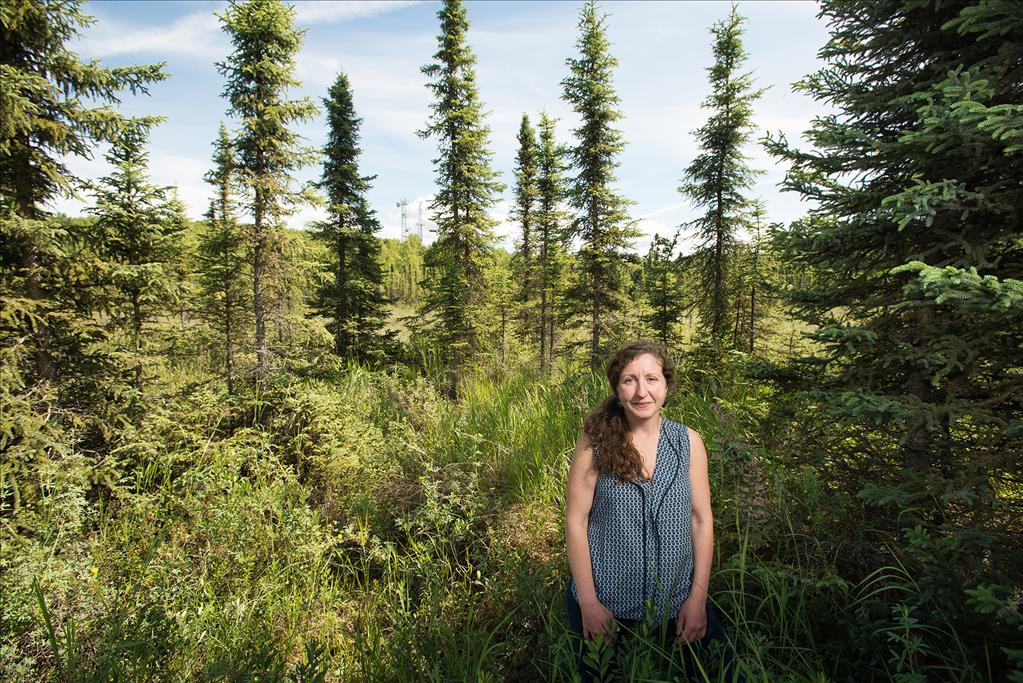 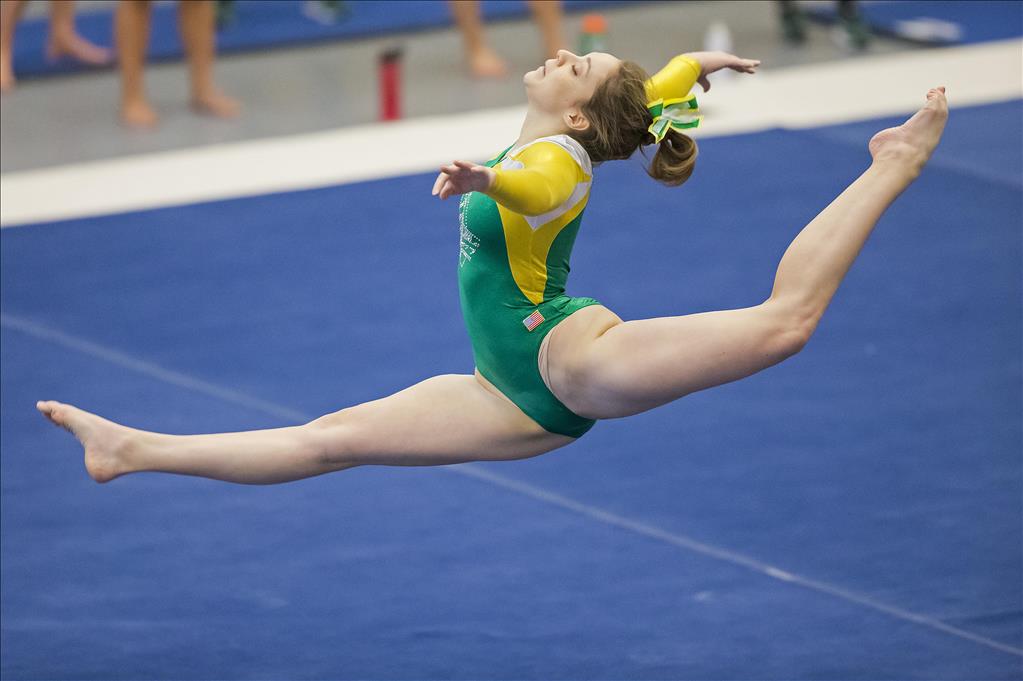