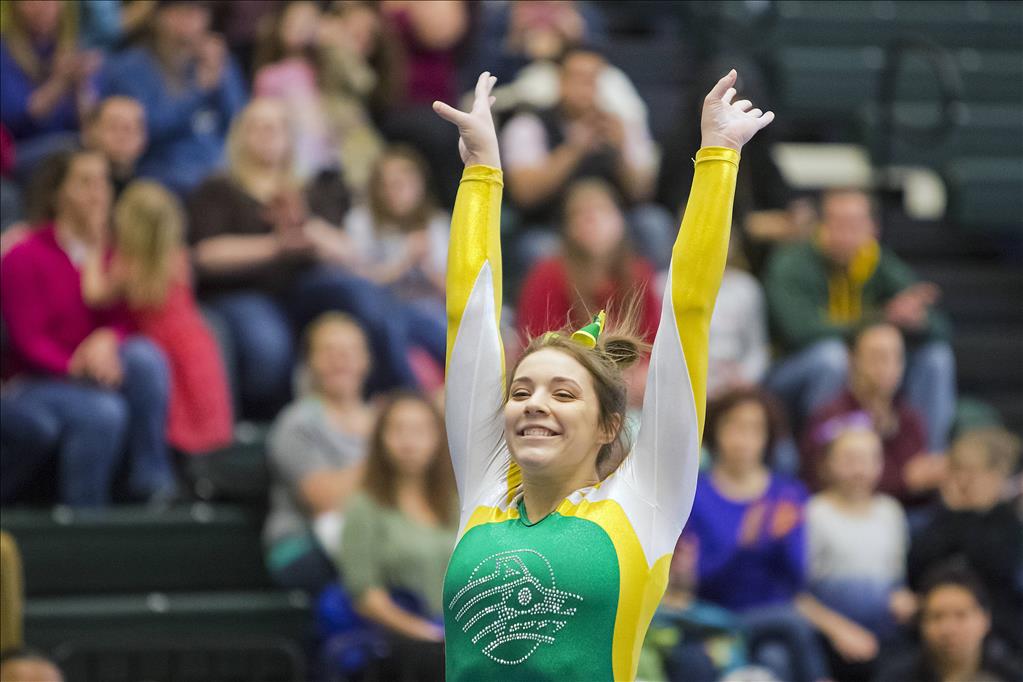 Mackenzie Miller is an all-around gymnast and a junior accounting major with a 4.0 GPA. She was recently voted by her fellow teammates and coaches as Team MVP for the 2017-2018 season. (Photo courtesy of UAA Athletics)

To say that the bar was set pretty high for Mackenzie Miller would be an understatement.

Born and raised in Michigan, both of Mackenzie's parents were gymnastics letterwinners during all four years of college before establishing their own gym, Oakland Gymnastics. It's there where she would find a home away from home, and eventually start taking lessons at age three with her mom as her coach.

"I think I've spent more time at the gym than at my own house growing up," recalls Mackenzie. "Since my parents owned the gym, I would be there even if I wasn't practicing. I fell in love with it ever since."

Outside of practicing at her parents' studio, Mackenzie was also active in Junior Olympics (JO) gymnastics, where she competed at level 10 - the highest JO level - and went on to qualify for state, regional and national competitions.

Even her relaxing activities revolved around gymnastics. When she wasn't busy participating, there's a good chance she was bonding with her parents by watching the sport on TV.

"Watching is so much fun, we get pretty into it," Mackenzie says. "Since we all know the same thing about gymnastics, it's nice that we can relate to who we're watching."

Mackenzie first heard about UAA through her parents, who were told about the university's strong gymnastics program through their connections in the coaching community. Early on, the idea of moving that far north for college seemed more entertaining than feasible for Mackenzie. But the more she thought about it, the more she realized that it was a great opportunity.

According to Mackenzie, college gymnastics differs from JO gymnastics in that there's greater emphasis placed on the team rather than the individual, which is an environment she's no stranger to from her days in her parents' gym. As a team, six gymnasts compete on each event and the top five scores are compiled. 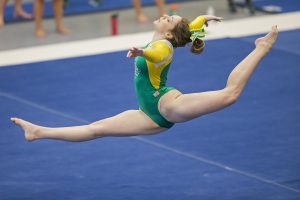 "It's great if you do well individually, but I get more excited when the team does well," she explains. "It really is more of a team sport, and that's how I was brought up. I love seeing our team succeed."

That sense of Seawolf team pride was most recently apparent during the 2018 season. When the year began, Mackenzie, a sophomore at the time, described a shortage of returning teammates due to an unfortunately high number of injuries sustained over the summer. On average, a gymnastics team usually has 12-15 gymnasts. At the lowest point of the season, the Seawolf women's gymnastics team only had about eight.

"So many girls were injured, but I was really proud of the way the team stepped up and was able to keep moving forward," she says.

Adding to the challenge of the most recent season was Mackenzie's training to become an all-around competitor, meaning a competitor in all four main gymnastics events: bars, floor, vaults and beam. Previously during her freshman year, Mackenzie only competed in the two events she felt strongest in - bars and floor. However, after the encouragement from her coaches and teammates, she decided to round out her training and compete in the remaining categories.

"Once I started training, it all started to fall into place and I think it's awesome competing in as many events as you can," shares Mackenzie. "The fact that my coaches believed I could do it was a big part of it."

The extra training seems to have paid off. At the close of the most recent Mountain Pacific Sports Federation (MPSF) season, Mackenzie finished as UAA's second-best all-around competitor and first-place academic athlete with a 4.0 GPA. 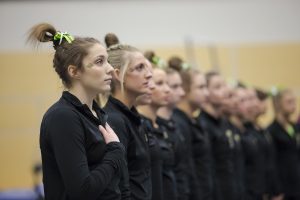 Mackenzie Miller and her team stand for the national anthem. (Photo courtesy of UAA Athletics)

As if that weren't amazing enough, she was also chosen as Team MVP.

"Mackenzie being voted Team MVP came as no surprise as she's an example both in the classroom and in the gym," said UAA women's gymnastics head coach Tanya Ho. "I'm excited to see her return as a strong all-arounder to help lead the team as an upperclassman."

"I'm just so grateful for my teammates for believing in me and voting for me," says Mackenzie. "It's a pretty amazing feeling."