The July day I caught busy Katie O'Loughlin on her cell phone, she told me she planned to buy her next ticket to Cuba that very night. It was for a fall residency with a Havana-based dance company, funded by a Rasmuson Foundation individual artist's grant. 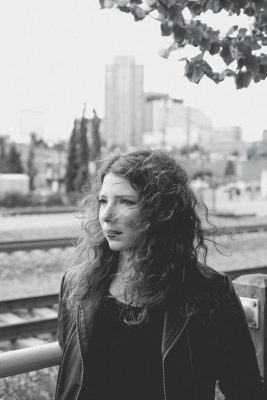 This would be a return visit to the Caribbean island for this 2017 UAA theater and dance alumna. She was first there a year ago, working on an Honors College-funded undergraduate research project that explored isolation and resilience among Alaskan and Cuban dancers.

While Alaska and Cuba are geographically very far away from each other and in very different climate zones, O'Loughlin found striking similarities. She captured resonating themes in a final project, called Blending Borders, that culminated in a public dance performance at the Anchorage Museum last October. Her successful grant application to the Rasmuson Foundation followed quickly.

She and fellow UAA student Caroline Streff, a literature and international studies major, comprised the first Alaska cohort to win fellowships for work in Cuba, supported by a three-year pilot affiliation between UAA, the Anchorage Museum and the Ludwig Foundation in Havana, Cuba.

Year one: dance and poetry

While O'Loughlin's research canvas was dance and choreography, Streff's was the role of poets and poetry after the 1959 Cuban revolution. Her study and reflections led her to return to writing poetry herself. Streff shared the stage with O'Loughlin at the museum event, reading from poems she wrote while in Havana.

UAA professor Jill Flanders Crosby called O'Loughlin and Streff's collaborative museum event "an extraordinary and mature performance work. It captured the depth of their experience and illuminated the understandings built across the waters."

Although Streff struggled with logistics and finding Cuban poets and commentators willing to go on the record, she said she cherished her study abroad opportunity.

Caroline Streff studied the cultural role of Cuban poets after the 1959 revolution. Here at the Oct. 6, 2017 First Friday at the Anchorage Museum, she reads some of the poems she wrote in Havana. (Photo courtesy Katie O'Loughlin)

"My time in Cuba was one of great personal significance," she said. "It was the first time I'd traveled outside of the country and for Cuba to be the first stamp on my passport was...well cinematic...I will always be grateful for my time in Cuba for allowing me to rediscover my own poetry..."

Streff and UAA history professor Ray Ball will collaborate on an event at the UAA Campus Bookstore at noon on Friday, Aug. 3, called "Cuba in Poetry, History and Images," which will include some of Streff's work from Cuba. Professor Ball, Streff and several other students are also collaborating on a journal article documenting a digital archive of primary source material from Cuba, a project that grew out of one of Ball's Spring 2018 history classes.

Ball, whose research focus is on Latin American studies, and languages professor Francisco Miranda have visited Cuba for their own work and to support the UAA students while they were on the island.

The pilot program can fund three years' worth of UAA student travel and research in Cuba. The students go for about two and a half to three weeks. Successful proposals tap into some aspect of resilience found in Cuba and Alaska as each community adapts to rapid environmental change and political or economic cycles of boom and bust.

The second-year cohort returned from their Cuba travels in early June. They are UAA students Kelsey Hernandez and Meghan Stanford.

In her proposal, Hernandez saw links between Alaska Native children sent to boarding schools before and after Alaska statehood, and the Cuban Operation Peter Pan, when thousands of Cuban children were airlifted to the United States to avoid a revolutionary re-education program by the Castro regime. In both Alaska and Cuban cases, children were deprived of family and cultural ties and contexts.

The results of their work are in progress. Like Streff and O'Loughlin, they'll produce analytical papers and public presentations Friday, Sept. 28 at the Anchorage Museum, as well as at the Undergraduate Research Symposium next spring.

How Alaska and Cuba got so connected

Since the late-1990s, Flanders Crosby has been researching and documenting the central role of dance and music in religious ceremony. She's traced the journey of ritual dance forms from Africa to Cuba via the trans-Atlantic slave trade. Her work culminated in a collaborative multidisciplinary art installation, Secrets Under the Skin, which she and fellow UAA dance professor Brian Jeffery premiered in Havana, Cuba in 2010, and opened at UAA in 2011.

But the fuller truth behind the Alaska-Cuba connection is more complex and threaded.

Flander Crosby's decades of work on religious music and dance rituals meant many trips to Ghana and Cuba. Explorations were enriched by layers and layers of academic and professional collaborations and friendships. The Ludwig Foundation, the leading cultural and art institution in Havana, is among the most powerful and fruitful connections Flanders Crosby made.

The Foundation supported Flanders Crosby's work from the beginning, including helping her Cuban research assistant, Melba Núñez Isalbe, spend a month at UAA as a visiting scholar in 2017, and helping Flanders Crosby find a safe and suitable archive in Havana where all her extensive oral histories can be secure and accessible.

Anchored in the Honors College

"He opened the doors with his ability to brainstorm and problem-solve any perceived obstacles," she said. In addition, the Honors College, through the Office of Undergraduate Research and community scholarship donations, was able to fund the pilot program for three years.

"I floated the idea that Alaska and Cuba have similarities in the transitions they face," Mouracade said. "Both have a great need for resilience, which is a common discussion topic right now. And the museum has taken an interest in community resilience as well. That's the common thread through all of this."

Mouracade was exuberant about the importance of this kind of overseas research experience for undergraduates.

"What the students bring back has been so valuable, just in terms of their contributions to classes," Mouracade said. "Katie went on to get a Rasmuson grant, and that shows how these opportunities are investments in the students. The combination of this study abroad - where you get international exposure and an undergraduate research opportunity - these are among the highest impact experiences students can have. Compounding them has a profound affect."

"A permanent opportunity is obviously dependent on geopolitics," Mouracade said. "But the two institutions have been very productive and we hope we can keep it moving forward. The Ludwig Foundation helped us connect with other NGOs in fields like engineering and environmental science. [Ludwig Foundation] has a focus on the arts, but there are also great opportunities in other disciplines."

Flanders Crosby and Benítez had similar success with Anchorage Museum director Julie Decker. She warmed to showcasing UAA student work at museum public events, such as First Fridays, but also to potentially hosting Cuban artists at the museum.

A story of growth

In many ways, Katie O'Loughlin was primed for the opportunities she found in Cuba. She grew up in Alaska as a gymnast first and a dancer second. "Gymnastics gave me a great foundation," she said. "It gave me the muscle and strength for dance."

As the fourth of five children, she said she was always chasing after siblings, trying to keep up. That made her ambitious, she says. After high school, she applied to schools with serious dance programs, and got accepted in New York City and in London. She committed to London.

Then came another twist that shaped her. With her bags packed and ready to go, her student visa to study in England fell through at the last minute. She was bereft, set adrift without purpose or direction.

"I was an 18-year-old with a crushed dream," she said. "I didn't know how to take steps forward." She had never imagined a college life in Anchorage.

A dance teacher found work for her at a physical therapy clinic in the Valley. She moved out from her family home, bought her first car and suffered her first romantic break up.

"It was the most terrible year of my life," she said. "It was the year I struggled with an eating disorder. I was so insecure. Everything was just so sad."

Day by day, she survived that difficult year, and says the whole episode taught her tremendous resilience. Today, she says happiness is a choice and she's made her decision. 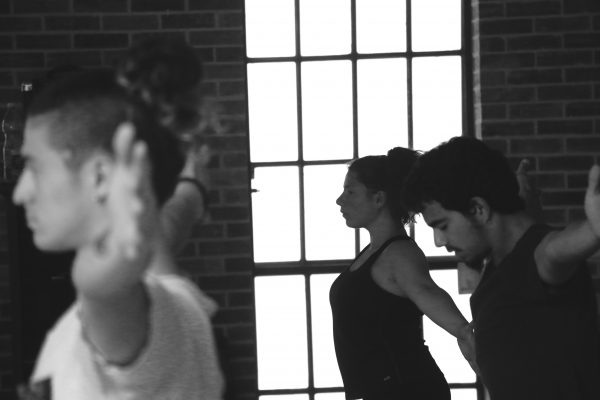 Katie O'Loughlin, center, joined master classes at DanzAbierta during her fellowship in Havana. This experience led to her successful application for a Rasmuson Foundation individual artist grant to return and continue her studies with that company this fall. (Photo courtesy of Katie O'Loughlin)

After her year working, she enrolled at UAA with the intent of becoming a physical therapist. But after a few classes, she switched to what was really pulling her forward - dance and choreography. She's proud to say that the opportunities to choreograph six campus performances and to dance at UAA have given her a resume she's proud of.

So resilience is a strong personal theme for O'Loughlin. It was natural that she'd be curious to see how Cubans, despite economic sanctions and breached diplomacy with the United States, managed to sustain a creative dance community that includes vibrant strains of ballet, modern and folkloric.

In Havana, she visited high school, college and professional dance companies to observe classes and interview directors on how they sustain creativity. At one school, DanzAbierta directed by Susanna Pous, O'Loughlin had the opportunity to take master classes with company members. Something about the way DanzAbierta worked with its dancers clicked in a big way with O'Loughlin.

"I'm trying to think how to describe it," she said. "It was a free way of moving. They were so beautifully technically trained, but the way each dancer moved was in their own body. They did not have to match a certain standard or body type; they were allowed to fully be themselves."

The artistic director, Pous, (who had worked with UAA dance professor Brian Jeffery when he choreographed a piece for the company), connected with O'Loughlin. "They knew I was his student," O'Loughlin said. "Watching them and dancing with them was so much fun. I talked with the director and she said if I ever came back to Havana, I'd always be welcome."

Thus, the dream of the Rasmuson grant to fund O'Loughin's additional training was born. She'll spend October and November taking classes five days a week with DanzAbierta. She's intent on figuring out their special brand of choreography, before embarking on her next academic step, pursuing an M.F.A. in dance. She sees multiple potential paths for her future: dancing with a company, teaching or working in sports medicine.

"There's not a right way to do life," O'Loughlin said. "You get to make choices as you go. That's the beautiful part of it."

Written by Kathleen McCoy for UAA Office of Advancement