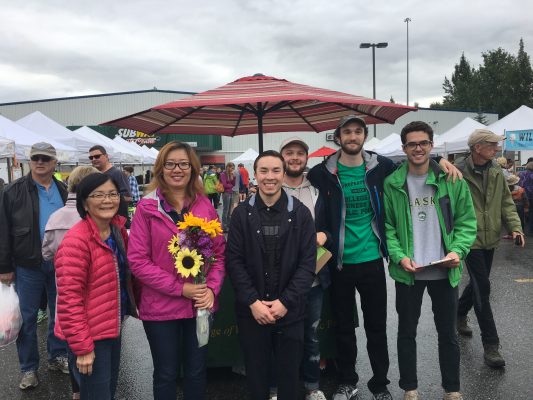 In August, among the rows of white-capped tents of local artists selling handmade crafts, Alaskana memorabilia and food vendors at Anchorage's Saturday Market, six students from UAA's College of Business and Public Policy (CBPP) weaved their way in and out between busy shoppers and tourists, asking locals a simple question - why buy local?

"I'm interested in consumer preferences of locally grown food," said Angie Zheng, CBPP associate professor of economics, who is working on a research project titled, Training Students to Conduct Consumer and Marketing Research of Alaska Local Food Products, funded by the UA Foundation Harold T. Caven Professorship. She's collaborated with two professors from the Lower 48: Distinguished Professor Rodolfo M. Nayga Jr. at the University of Arkansas and Zhifeng Gao, associate professor at the University of Florida, to explore the impact locally grown food has on a state's economy. "I wanted to try and build an economic model and collect data through a survey to understand what our consumer preferences are."

Alaska has always had a small but hearty local farming industry, with crops like carrots and potatoes, but with the national farm-to-table movement, Alaskans' interest in purchasing locally grown products has increased dramatically in the last 10 years or so, pushing Alaska farmers and their products into the limelight.

Zheng said she's noticed this shift, especially in local supermarkets where more Alaska grown products are lining shelves and filling bins, as well as the sudden uptick in local farmers markets popping up all over the city.

"Consumers are really interested in buying local," Zheng said, further explaining that this sudden explosion in local food during the summer months is what piqued her interest to conduct research on this particular topic. She said similar consumer preference research has been conducted in the Lower 48, but there is nothing that has been done in state to answer the question of when, where, why and how much Alaskans will pay to buy local.

"Agriculture has the potential to be one of the important industries in the state," said Zheng of Alaska's growing farming industry. "If you go to the grocery store in the summer you can find locally grown food."

Zheng said that 95 percent of Alaska's food is imported from the Lower 48 or from other countries, but with the increased demand for locally grown produce options, that could change. Zheng said that she and her collaborators worked hard to create unique survey questions that would pinpoint what consumers' preferences are when shopping for their weekly groceries.

Do consumers mind paying the higher sticker price for an organic, locally grown carrot versus a mass produced one? What specifically are consumers willing to pay a higher price point for and where do they draw the line? Is there a difference between organic, non-organic and hydroponic grown foods, and does this matter to consumers - do they know the difference?  These were all questions Zheng and her collaborators were hoping to discover through creating the survey. 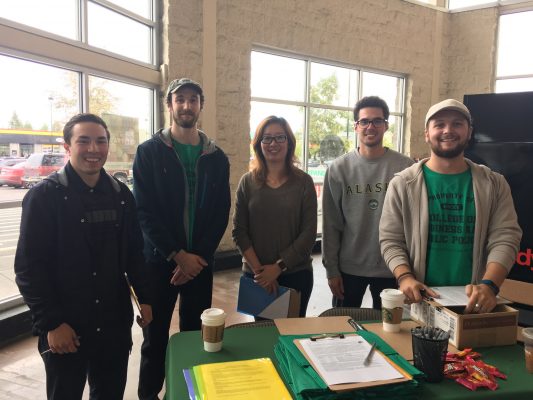 Zheng and her students spent the month of August visiting local grocery stores and farmers markets with their "pencil and paper" survey, asking consumers, why buy local? (Photo courtesy of Angie Zheng)

Zheng and her six students conducted "paper and pencil" surveys at five locations across the city from Fred Meyer to local markets during the month of August. For her students, it was challenging because it was the first time they were in the field, taking what they'd learned in the classroom into real life.

"Outside a formal classroom setting I had never done research before, so this summer the experience was pretty interesting," said Kohei Watanabe, a senior economics major graduating this spring. He'd taken Zheng's econometrics course and was interested in helping his professor conduct her research when she made the announcement in class one day. "I felt kind of like a salesman - except we were passing out surveys - and since this is social science research, just observing their behavior to complete surveys was pretty interesting."

Watanabe said he was surprised by how willing people were to participate in the economic research project, and that as the month went on, it became easier to engage with locals and ask them questions. Throughout the project, he was grateful to work alongside his professor.

"I don't think a lot of people get the opportunity to conduct research with their professors, especially at the undergraduate level," Watanabe said. "I was excited to hop on this opportunity to get outside the classroom and conduct surveys - plus I really like economics and am really interested to see what the results were."

Zheng will be working on analyzing the data and hopes to disseminate her results in early spring 2019. Currently, Watanabe is knee-deep in entering data from the monthlong project in Excel spreadsheets.

"Overall, I think people are more willing to pay a premium for Alaska grown or organic - people definitely have preferences even between Alaskan grown and organic," said Watanabe. He said he thought Zheng's research would be valuable for the Alaska Grown brand, or anyone branding their products as locally Alaska grown, because initial observations showed that Alaskans are loyal to locally grown produce. A close second? Organic.

So in the spring, when local farmers across the state are planning their summer and fall growing seasons, tidying up their greenhouses and planting their starts, Zheng will be wrapping up her research in time to share with local businesses to provide some valuable insight into Alaskans' consumer preferences on buying locally grown produce.