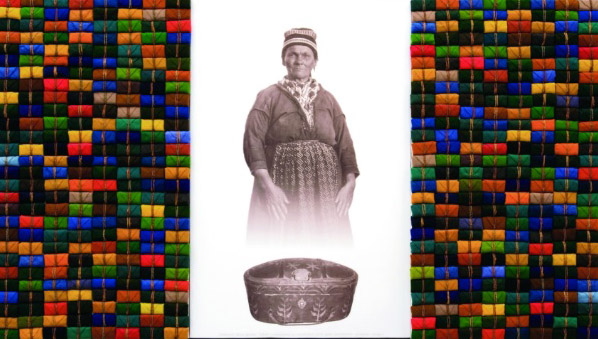 Sámi Stories: Art and Identity of an Arctic People opened with a day-long symposium offering in-depth perspectives on Sámi history, identity and visual culture. The program featured talks by the exhibition curators as well as a dialogue between Tromsø-based artist Aslaug Juliussen, Swedish-based artist Britta Marakatt-Labba and Alaskan artists including Ron Senungetuk, Alvin Amason, Sonya Kelliher-Combs, and Susie Bevins-Ericsen. Tromsø (Norway) and Anchorage are sister cities. As cities in circumpolar nations with large indigenous communities, we share a number of similarities and differences. The symposium was a joint effort among the Anchorage Museum, Northern Norway Art Museum and Tromsø University Museum, and UAA Art Department and Alaska Native Studies. 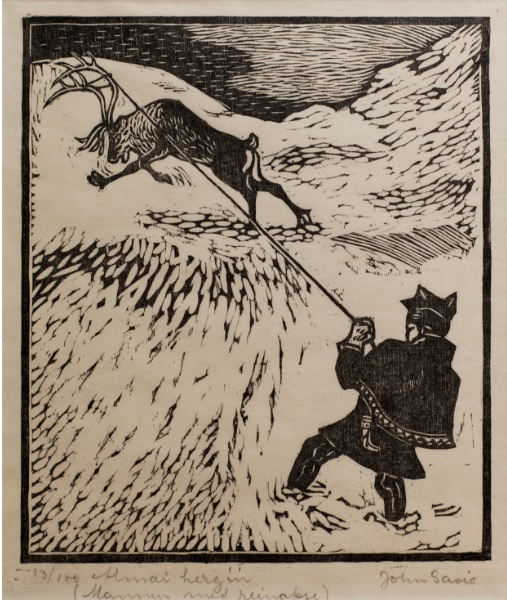 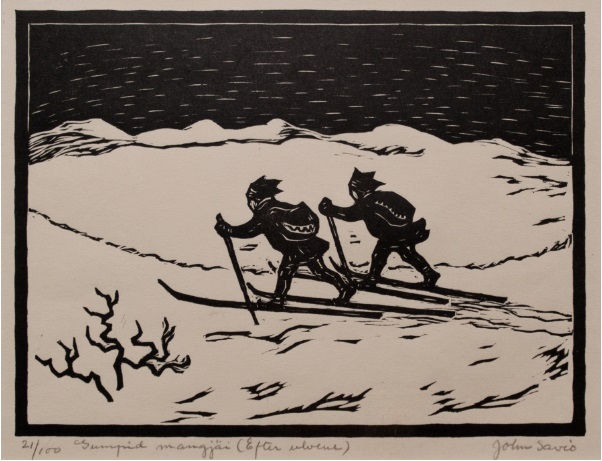 Alvin Amason was raised on Kodiak Island. His family was involved in fox farming, commercial fishing, and bear guiding. After high school he attended Central Washington University where he received a Masters degree in painting. He then attended Arizona State University and earned an M.F.A. He worked for several years for the Navajo Nation as Art Department Chair and instructor at Navajo Community College. He has had studios in Rhode Island, New Hampshire, California, and Washington State. In 1992, he was offered a position as Director of Native Arts at the University of Alaska, Fairbanks where he served for seventeen years. After retiring, he was asked to join the Art Department at the University of Alaska, Anchorage and develop a Native Arts curriculum and studio. He serves on the board of directors for the Alaska Native Arts Foundation and has a studio in Mountain View.

Susie Bevins-Ericsen (Qimmiqsak, Inupiat Name) was born at a remote Trading Post that her Father operated at Beechey Point, Alaska in 1941. This area is now known as the North Slope where the oil fields are located. Her Mother, Lucy Sakalook, was fifteen when her parents arranged her marriage to a Caucasian trader named Jack W. Smith. After his death, her mother married Lloyd Avakana and moved the family to the village of Point Barrow. Susie was raised in the hunting, fishing and gathering way of life, much like the way of our ancestors. Traveling from the most northerly village in Alaska to the city of Anchorage was a shock for the family. She attended public school, learned English and tried to fit into the Western culture. Being rooted in the Inupiat culture;her artistic expression comes from childhood memories, interpersonal relationships and spiritual faith, together with values and conflicts that shape her worldview. Her work represents her own impressions and experiences from a cross-cultural point of view. Addressing social, environmental and political issues that impact Native people is an integral part of her work. She continues to adapt and look for creative ways to balance cultural strengths and values, with technology and economic opportunities that have altered our lives with the discovery of Oil on our lands. Being rooted in her culture has given her the inner strength to evolve and grow as a person and an artist. For this reason, she mentors and encourages young people hoping to instill cultural pride. Embracing traditions, family relationships, and tribal affiliations are essential in establishing a sense of belonging. Being known and accepted strengthen our spirit to persevere during difficult changes and challenges that affect us.

Charis Gullickson is curator at Northern Norway Art Museum in Tromsø. Born and raised in Anchorage, she moved to Tromsø ten years ago. Gullickson holds a MA in Art History from UiT The Arctic University of Norway and a BA in Art History from Montana State University in Bozeman. She specializes in contemporary art from the circumpolar region and has curated several exhibitions on Sámi art with accompanying publications. Her master's thesis is a comparative study of artists Aslaug Juliussen and Ronald W. Senungetuk. Gullickson is one of the curators of the exhibit Sámi Stories.

Marit Anne Hauan is the Director of Tromsø University Museum, which is a branch of UiT The Arctic University of Norway. Hauan's professional interests include identity, masculinity and folklore, and the narratives of the north. She is one of the curators of the exhibit Sámi Stories.

Nadia Jackinsky-Sethi is an art historian who focuses her work on Alaska Native art. She received her PhD at the University of Washington and completed a dissertation that examined the revival of Alaska Native art forms. Dr. Sethi teaches Alaska Native art history as an adjunct instructor in the Native Studies department at UAA. She also oversees a grant program that provides support for Alaska Native arts and artists at The CIRI Foundation in Anchorage, Alaska.

Aslaug Juliussen is a Norwegian Sámi textile artist. She studied at the Norwegian National Academy of Craft and Art Industry in Oslo (1976–80). After graduating, she served an apprenticeship with the renowned Norwegian textile artist Synnøve Anker Aurdal (1908–2000) in Oslo. Juliussen also studied at the Institute for Art Therapy in Odense, Denmark (1996–97). Today Juliussen lives in Tromsø, but for over twenty years, she was actively involved with reindeer herding in Finnmark, Norway. She incorporates reindeer remains in her works with fiber and textiles.

Sonya Kelliher-Combs was raised in the Northwest Alaska community of Nome. Her Bachelor of Fine Arts degree is from the University of Alaska Fairbanks and Master of Fine Arts is from Arizona State University. Through her mixed media painting and sculpture, Kelliher-Combs offers a chronicle of the ongoing struggle for self-definition and identity in the Alaskan context.Her combination of shared iconography with intensely personal imagery demonstrates the generative power that each vocabulary has over the other.Similarly, her use of synthetic, organic, traditional and modern materials moves beyond oppositions between Western/Native culture, self/other and man/nature, to examine their interrelationships and interdependence. Kelliher-Combs' process dialogues the relationship of her work to skin, the surface by which an individual is mediated in culture.

Britta Marakatt-Labba is a Swedish Sámi textile artist and painter. She studied at Sunderby College (1971–73), the Industrial School in Gothenburg (1974–78) and the Sámi College in Kautokeino (1999–2002). Embroidery has been her preferred mode of expression since the late 70s and is a medium that is closely linked to duodji (traditional Sámi handicrafts). Her work depicts scenes from Sámi history and important events within Sámi politics such as the Kautokeino Rebellion and the Alta Controversy. In the late 1970s Marakatt-Labba was a member of the Mázejoavku (The Sámi Artist Group).

Ron Senungetuk grew up in the Native Village of Wales, Alaska. He began his exploration of art at Mt. Edgecumbe High School in Sitka. He continued his art studies in woodworking and metalsmithing at the School for American Craftsmen at the Rochester Institute of Technology in Rochester, New York, where he earned AAS and BFA degrees. After graduation he was awarded a Fulbright scholarship to study metalsmithing and design at the National Academy of Craft and Arts Industry in Oslo, Norway. After finishing his education, Ron returned to Alaska where he began a 25-year career as professor of art and design at the University of Alaska Fairbanks. While at UAF, he founded and directed the Native Arts Center in 1965 and was head of the Art Department from 1977 to 1986. Since retiring, Ron has worked as a proponent of public art and is a practicing artist in Homer. In 2014 Ron received the Governor's Award for Lifetime Achievement in the Arts and Humanities.

This event would not be possible without the hard work and support provided by the University of Alaska Anchorage, UAA Art Department, UAA Alaska Native Studies Program, Anchorage Museum at Rasmuson Center, Northern Norway Art Museum, and the Tromsø University Museum.

Also a special thanks to the Office for Contemporary Art Norway, Estrid Ericson Foundation and the Norrbotten County Council for funding Aslaug Juliussen and Britta Marakatt-Labba's travel and accommodation expenses.