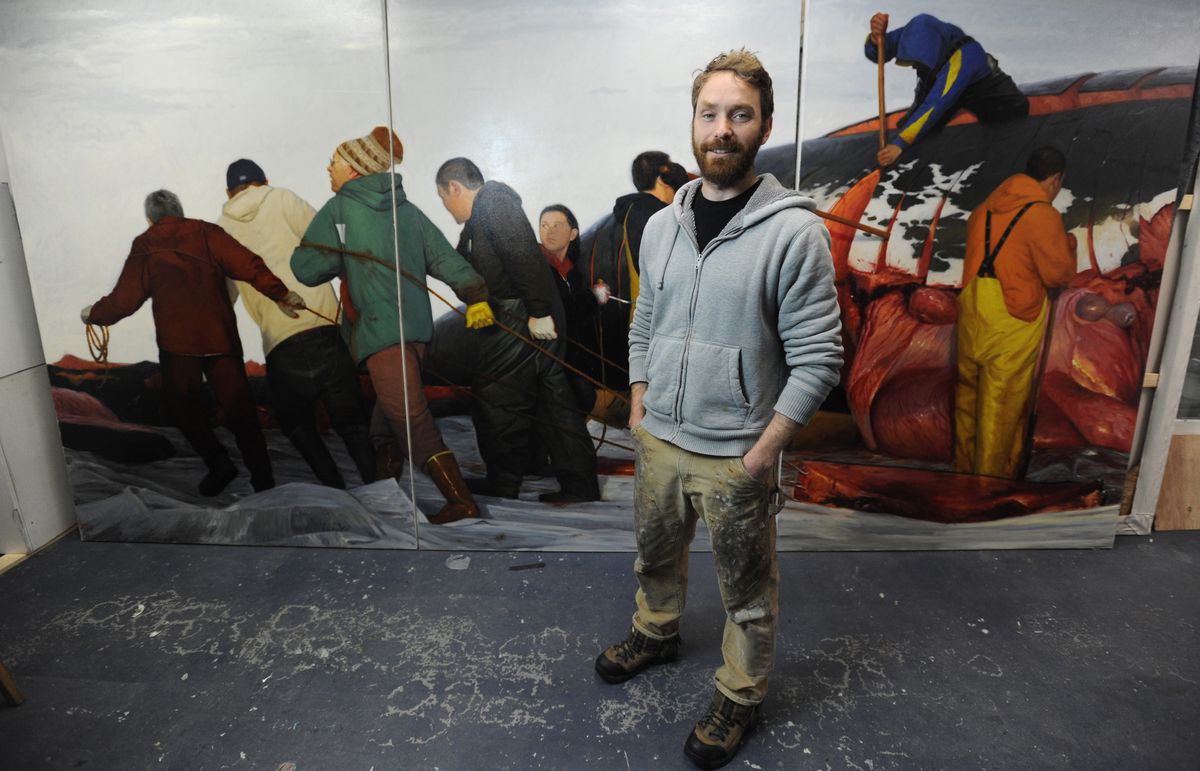 Artist David Pettibone with his “The Whale as a Dish, Spring Hunt,” one of two large-scale triptych paintings of subsistence whale hunting in Utqiagvik. (Bill Roth / Alaska Dispatch News)

David Pettibone came to Alaska looking for one thing and found something else that was more profound. It is his gift to see beyond what he expects to see.

For generations, painters and artists of all kinds have projected their fantasies on Alaska. The place is so big and inspiring it is difficult to avoid stereotypes of grandeur or drama.

But Pettibone, by painting what he truly observes, has created something startlingly new. In his current exhibit at the Anchorage Museum, I saw a place I've always known and suddenly realized how beautiful it really is.

Pettibone's Alaska dream began in Brooklyn. A well-trained oil painter seasoned in the art world, he wanted to paint living things, to create images that included life and death. He felt closest to his goal while walking his dog in a city park.

A photo in The New York Times of Inupiaq whaling in Utqiaġvik, then called Barrow, brought him north. The picture showed a bowhead whale being carried by construction equipment. It seemed like magical realism had come to life.

"It kind of hit all the bases," Pettibone said. "Just the idea of this giant sea creature on a front-end loader—to me, at first, that kind of fit the bill."

Getting an invitation to go to the community — and finding a way to earn his keep while there — took a lot of time and persistence, but in 2015 Pettibone spent seven months in Utqiaġvik driving a van, giving painting lessons, and learning everything he could about subsistence whaling.

Through visits to whale camp, prayer meetings and celebrations, and especially his many times helping butcher whales, Pettibone began to appreciate the meaning of the harvest and how it fulfills many needs for the Inupiat. The true picture was much deeper than the one he had sought.

"It is the whale giving itself, the sacrifice of one life for another, and I think it's the butchering that really conveys that, when the community comes together," he said.

Two enormous tryptics convey those moments, looming as if life-size. I've been to whale hunts, but when I first saw one of these paintings, my spine tingled. The images are clear, bright and accurate, like photographs, but somehow have the substance and texture of being present.