In Victorian times many physical phenomena had already been discovered and described by natural laws, but life's most eloquent mechanism was still unknown. Join the young Charles Darwin on an adventurous voyage of exploration circumnavigating the world with the H.M.S. Beagle. Hear Darwin himself reveal the simple and beautiful mechanism that explains the evolution of all life on Earth: Natural Selection.

This fulldome program was created by Mirage3D, the 3D animation and film studio that brought you the planetarium favorite, "Dawn of the Space Age." This meticulously produced presentation seamlessly brings together photo-realistic animation and real-world footage to immerse you in the wonder of Darwin's world. 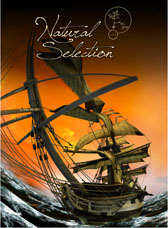