Engaging and appealing to audiences of all ages, Two Small Pieces of Glass is a fulldome show that traces the history of the telescope from Galileo's modifications to a child's spyglass-using two small pieces of glass-to the launch of NASA's Hubble Space Telescope and the future of astronomy. It explores the wonder and discovery made by astronomers through out the last 400 years.

While looking through the astronomer's telescope, the students, along with the planetarium audience, explore the Galilean Moons, Saturn's rings, and spiral structure of galaxies. During their conversation with the astronomer, they also learn about the discoveries of Galileo, Huygens, Newton, Hubble and many others. 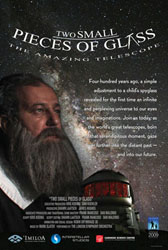