A grinning lad in UAF blue and gold goalie pads reclines in front of a glossy gold chalice and holds up four fingers in a photo taken with Alaska Gov. Sean Parnell, just after the Nanooks took their fourth-straight Governor's Cup. 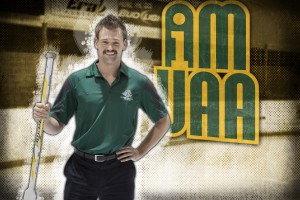 "They hate 'Los Anchorage' with a fiery passion," Thompson said of the Nanooks and their fans. "I was an Aces fan at the time, so I didn't realize at first how intense it was. You want to beat UAA so bad; your whole season's based on the Governor's Cup. When you walk into Fred Meyer after winning the Governor's Cup, you're like Brad Pitt walking in. You walk into class, professors hug you. The whole town acts like you won the Stanley Cup. They live and die by that."

The Nanooks ended a Cup dry spell when Thompson was a freshman. "When we won it, there was already a UAA plaque with roster on the Cup," he said. "[UAA] had won it for three years; I guess someone assumed they'd win it again. We took a butter knife and took the plaque off at the team party after the game."

Little-known fact: "The Cup spins," Thompson said. "We put our smallest guy inside the Cup and spun it around." 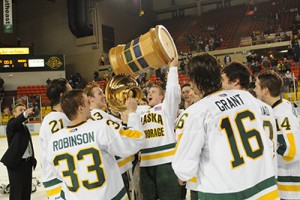 Hockey rivalry between UAA and UAF has seethed longer than the elapsed lives of today's college players-and even some coaching staff. It predates the Governor's Cup, a 20-year-old tournament that pits Seawolves against Nanooks every year. The teams played two games in December, at Anchorage's Sullivan Arena, and will clash again twice, in March, at Fairbanks' Carlson Center. 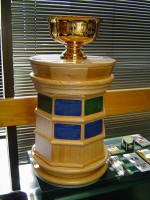 Anchorage has won the Cup eight times; Fairbanks, 12 times. The Cup-now known as the Alaska Airlines Governor's Cup-was a two-game contest for six seasons, became a four-game series for nine, and then switched back to two games until last year.

Mark Filipenko and other UAA alumni cheered the Seawolves last month at the two Governor's Cup bouts in Anchorage, which ended in a 3-2 victory for the Seawolves in the first game but a 5-4 loss to the 'Nooks in the second game. Now, some UAA (and UAF) alums in Anchorage are either booking flights or arranging caravans to Fairbanks for the two-game Governor's Cup finale that's scheduled in March.

For more than a decade, Filipenko and other alumni players have been getting together for pickup games Wednesday nights at Anchorage's Subway Center-no refs, just an hour of ice. The alumni players recently launched a tradition of playing a game of their own before the Governor's Cup: Fairbanks alumni came down to play in December and Anchorage alumni will travel to Fairbanks to play in March.

Filipenko moved from Penticton, British Columbia, to Anchorage in 1996 to play for the Seawolves, as a defenseman.

He reminisced about the first game he played for UAA.

"We were playing Fairbanks up in Fairbanks," Filipenko said. "My parents had come."

During that game, Filipenko caught a pass from the corner and neatly tucked the puck into the Nanooks' net.

"It wasn't anything too fancy, but it was memorable," Filipenko said. "There was definitely some booing going on. When fans aren't liking it, it's more motivational, kind of fun. It's really nice [scoring a goal] at home because you have all the support, but when it's in front of 5,000 people at the Carlson Center, there's a lot of satisfaction."

Four years later, Filipenko left the Seawolves, and the freshly minted alumnus entered the ranks of avid UAA hockey fans that get together for game-day tailgates and potlucks, paint faces in Seawolf green and gold and eat barbecue cooked up by Spirit, UAA's mascot.

Bill Stoltze lives in both worlds of the rivalry. Stoltze began watching hockey at the Patty Center while attending UAF in the early 1980s and still seems, reflexively, to be a Nanooks fan-when asked about the Governor's Cup, for example, Stoltze described the outcome of last month's two games at Sullivan Arena as being a "3-2 loss and 5-4 win." But, Stoltze has extended deep roots in Anchorage: He attended Chugiak-Gruening Junior/Senior High School, for more than a decade has represented an Anchorage district in the Alaska Legislature and counts many UAA hockey fans among his friends.

"I saw more fighting than hockey," Stoltze said, describing pre-Governor's Cup UAA-UAF games. "There was a much larger contingent of Alaskans playing. I knew a lot of the visiting players from UAA, knew a lot of kids from my high school, Fairbanks had a lot of locals I knew in the dorms. I was watching a lot of friends play. It's become a lot more formalized now. They weren't in Division I hockey yet and it was definitely a lot smaller."

"They were both struggling, wanting to be the top team in Alaska," he said. "There was no Governor's Cup, then; they were just playing each other. Back when I was sprier, we'd jump in the car and the alums would scream up to Fairbanks to watch both games, multiple years in a row. It's a great tradition."

The rivalry seemed serious even when they were in different leagues, Stoltze said. "It's even more intense because the Governor's Cup games count in their [Western Collegiate Hockey Association] division standings now.

"Anchorage people give me a hard time," Stoltze said. "I have a jersey the alumni people gave me with the Nanook logo-it's kind of fun to wear that even though Anchorage people give me a hard time for rooting for the wrong team. I'm proud of where I went to school. The Nanooks team got me involved in being a big hockey fan. In politics it would be better to be the UAA fan, but you have to pick a team and have your loyalties. I root for the Nanooks, but appropriate for the Seawolves."

Jack Kowal was a sophomore on the Seawolves hockey team when the first Governor's Cup hockey game took place, in 1993.

"Born and raised in Anchorage, you kind of grow up in this town not liking Fairbanks," he said. "It starts at an early age in youth hockey, well before I went to UAA. We always did really good against them, but some select times they did beat us-it's not really a rivalry if you come out winning every single game."

"They played a lot more games against each other," Kowal said of that period when both teams were independents. "The more you play against them, the more you're going to build up a hatred against them. My freshman year, we might have played Fairbanks maybe six times; after we joined the [Western Collegiate Hockey Association] in my sophomore year, the number of games went to four and then two."

Fairbanks fans would turn out in force to support their Nanooks. "They were ballistic," Kowal said of the 'Nooks supporters. 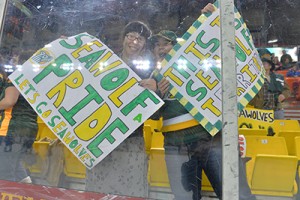 Despite signs depicting Nanooks polar bears and Seawolves inflicting mayhem on each other, friendships existed between players on the two teams.

"We've all had good friends that ended up playing for UAF, which added to the rivalry because no one wants to lose to their friends," Kowal said. "The fact that it's an intrastate rival fuels the fire more. It's bragging rights. There's a lot of ribbing, giving each other a hard time. If you're out socializing and you lost the Governor's Cup, maybe you get to buy lunch for them. It's a pride thing. It's tough to swallow for a while if you lose; only one of those years I had to suck it up."

He can't forget that loss.

"You try not to remember that year, wipe it out of your mind," Kowal said. "I can still remember to this day, losing in a shootout. Seems like it was just yesterday."

But there is consolation: Kowal's team earned the Governor's Cup three of his four years at UAA. He knows the joy of seeing his name inscribed on three of its eight UAA-green roster plates.

"There's nothing better than winning that series," he said. "That's a huge trophy. Winning it carries more weight. We want to be known as the best college hockey team in the state, and just knowing you're going to be able to leave that legacy...I can look back on it and say we did some good things, made our mark."