Gymnasts ramp up for new season 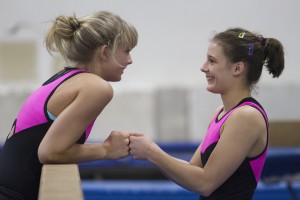 The first thing you notice about a Seawolf Gymnastics practice: it's not quiet. In a sport that could feel very individual when you're alone as a competitor on the beam or the floor, these women and their coaches are committed to cheering each other through high-flying flips and impossible tumbling passes.

The second thing you notice is they're sharing space with little kids. The team works out across town from campus at the Anchorage Gymnastics Association facility. As much as they've appreciated that community partnership, Coach Paul Stoklos and the rest of the team are looking forward to their move to the new Alaska Airlines Center in August.

"I'm so excited!" says captain Morgan Cook, who, as a junior, is the team's most senior competitor this year. 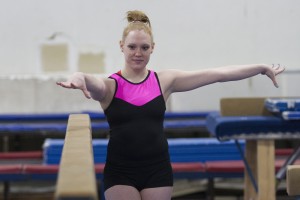 Stoklos is also looking forward to hanging up his chauffer cap on home turf.

"This will be the last year of cleaning off vans to go to the gym, driving 15-20 minutes each way. To me, that's big," he says. "When it's really snowy, I'm down there an hour before practice, cleaning vans, deicing them to drive to the gym. Now those guys will be able to walk across the parking lot from the dorms."

It'll also be his last year of trucking equipment across town for meets in the Wells Fargo Sports Complex. He jokes about getting a director's chair to do more sitting during practice and competitions in the upcoming seasons.

This is the 30th season for Stoklos, who has been at the helm since the beginning, taking the Seawolves from Div. II to Div. I 10 years ago. Seriously, someone get that man a chair.

M'rcy Matsunami, a sophomore from Nebraska, was a standout last year as a freshman, setting school records for all-around and bars.

"I'm excited about this year," she says. "We have a young team, but we had a young team last year, too, and we did fairly decent. Every week we get better. We're down to fine-tuning now."

Stoklos calls her over to demonstrate their video software on an iPad. Ubersense is what he calls a fancy kind of Tivo for coaches and athletes. In their new facility, they'll have multiple cameras trained on bars, floor, beam and vault. The athletes and coaches can manipulate the video so they can watch each micro-movement of a routine, play them side-by-side, etc.

"I'm a visual learner," says Matsunami, "so this is really helpful."

"She can watch something once and fix it. They can kind of coach themselves," says Stoklos.

"I started putting academic pressure on them before there was even a department policy, 25 years ago," says Stoklos, who also acts as test proctor when the team is on the road.

Last year, Stoklos recruited two international competitors, Marie-Sophie Boggasch (Germany) and Simone Penker (Austria), and he's as proud of their academic achievements as he is of their considerable athletic prowess.

"Marie-Sophie competed on the German world championship team in 2012 and Simone just went back to compete in her national championships in November," he says. "Both of those girls are 4.0 students in their third semester with English as a second language." 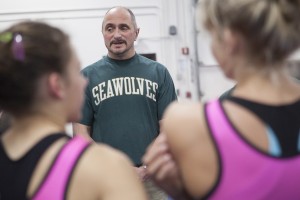 Marie-Sophie just received her instrument rating in the piloting program and Simone has loaded herself up with biological sciences courses, with an eye on med school in Austria after her academic and athletic careers come to a close.

Nicole Larkin, a freshman from Washington, is another new infusion of talent who is looking toward medical school after graduation.

She echoes Cook and Matsunami in her enthusiasm for the new Alaska Airlines Center.

Stoklos says to get it just right, he carried plans around for a year, asking other coaches to weigh in with what their dream gym would look like. He's happy with the final product.

"When it's all done it will be as good as any college facility in the country, better than most," he says, adding that it will continue to be a great recruiting tool.

He's got the talent, he's got a great facility in the works, so all that remains to push them to the top of their game is the home turf cheering section. 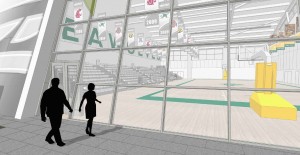 It'll be an easy commute for gymnasts to compete on their home turf in the new Alaska Airlines Center Auxiliary Gym. Their new practice facility will be right next door.

"A couple of the best meets we ever had, the most enjoyable, were when we had a couple of the girls on the team dating some Army guys. They came in and were rowdy as hell with painted bodies, raised a ruckus," he says with a laugh. "We beat Texas Women's University by like 1/10th of a point at one home meet and I gave it all to those guys for energy and spirit."

Across the gym, the "beam team" members are cheering each other on. Syncopated claps and shouted encouragement earn big smiles from competitors after they stick a tough element. They're all greeted with high fives, fist bumps and hugs at the end of a routine.

"Being able to get more students in for all our events is so important," says Stoklos. "With the new facility right next to the gym, it'll be so much easier."

So, there's the gauntlet. Fans, bring the green and gold and your cheering voice. That's the easy part. The athletes are training every day for the hard part.

For more details about the team, check out this season preview.

"Gymnasts ramp up for new season" is licensed under a Creative Commons Attribution-NonCommercial 4.0 International License.