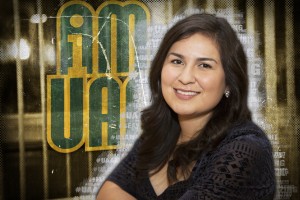 I AM UAA: Kira Eckenweiler Philip Hall/University of Alaska Anchorage

Music Performance student
Hometown: Unalakleet, Alaska
Fun Fact: Kira went on mission trips to Mexico to help out with an orphanage and to Thailand to build a soccer field for a bible camp.

On an evening in September, Kira Eckenweiler sat in a marshy spot near Unalakleet and called in a bull moose crowned with antlers spanning 67 inches. Her hands were shaking, so she steadied herself against her kneeling father before aiming and then firing her rifle. The moose ran 20 feet and dropped.

Kira gave away that meat from her first moose, a customary practice in her beloved Inupiaq community. The next day, Kira flew back to Anchorage, where the coloratura soprano studies music and playfully charms audiences with opera.

Kira sang all the time when she was a child. Her aunt and uncle, taking her along on a canoe ride when she was 2, distracted her from her parents'  absence by asking her to sing "Angels Watching Over Me," over and over, as their oars plied the water. Soon, Kira was singing random songs she heard on the radio and performing in the choir at Unalakleet's Evangelical Covenant Church.

After moving to Anchorage during her junior year of high school to get voice lessons, she attended and played basketball for Anchorage Christian School.

The first time Kira realized she might want to mold her passion into a career, however, was during her senior year of high school.

"I did really well at the state Solo & Ensemble [Music Festival]," Kira said. "I fell in love with the challenge it brought with my voice. It's super fun to be able to 'conquer' a song. I sing all the time. It's ridiculous how much I sing. I'm addicted to singing."

Kira enjoyed mainstream rock and pop and didn't begin to explore opera until after her freshman year in college. At the time, she was attending Montana State University — she transferred to UAA for her sophomore year and is a music performance voice major.

"I didn't even like opera, I couldn't understand it, thought it was too long," Kira said.

Kira saw her first opera, Engelbert Humperdinck's Hansel and Gretel, in Montana when she was 19, but didn't really care for it. Then she performed in the chorus of Giacomo Puccini's Madame Butterfly.

"I loved watching the lady who played Madame Butterfly and thought, 'Ahhh! I want to be you!'" Kira said. "Opera is amazing. People don't realize how challenging it is. You have to memorize something that's in a different language, have to act it out. Opera singers are so talented. There are stereotypical views of opera — a fat Viking woman singing — but it's a really complex form of music, with emotion coming through. It can be hard to listen to if you haven't heard it before. The more I learned about how challenging it was, the more I appreciated how much these people are trying to make something breathtaking."

Up until now, Kira has looked up Google translations of words in the songs she sings, since most of the classic operas are written in French, Italian or German.

"I want to learn the languages," she said. "It would be nice to know them fluently, to be able to express the songs properly. I'm taking German next semester."

Kira performed in the chorus during Anchorage Opera's productions of Puccini's Tosca and Gaetano Donizetti's Lucia di Lammermoor. In April, she sang the lead in UAA's Elixir of Love. She also sang in a benefit last year that raised money for the Typhoon Relief Fund, to help victims of a megastorm, Haiyan, which devastated the Philippines and other areas in the western Pacific. This spring, Kira will perform in Johann Strauss II's Die Fledermaus.

"They took apart everything I learned before," she said. "I thought I knew what I was doing, how to sing classically, but I was singing from my throat. In opera, you have to sing with your whole body — back, legs, chest, head — and it all goes together. It's like running a marathon. You have to work, challenge yourself to learn, take critique, don't get yourself down because of one person's view."

Kira's life isn't all about opera, however. She herring fished near Unalakleet for two summers and worked in various jobs, including scanning papers at the Bering Straits School District's food department; folding t-shirts at an Anchorage souvenir store; and tweezing scales, clipping fins and procuring samples of stomach contents from salmon smolt for Norton Sound Economic Development Corp.'s Fisheries Research and Development Program, to get data biologists use to predict future runs. Kira enjoys spending time back at home, in Unalakleet.

"I love the people there," she said. "My friends and I always ride around on four-wheelers, snowmachining, basketball, volleyball. I like fishing and hunting, too. My friends love listening to me sing but don't like listening to opera. They'll say, 'Let's listen to Beyoncé.'"

Kira loves to perform but, like many people, has experienced stage fright.

"Getting nervous screws up my voice," she said. "I tell myself that what I'm doing isn't that big of a deal. When you're singing, you have to stop being insecure, get over perfectionism and remember you're trying to bring beauty to people."