Panigkaq Agatha John-Shields grew up in the warm clasp of a small Yupik community, Toksook Bay. When it came time to leave home and continue her education, she hesitated about the prospect of attending college in Alaska's largest city and chose instead to take classes in Bethel and then Fairbanks.

A student passes a sign recently installed at UAA that highlights Tlingit words of welcome.
Philip Hall/University of Alaska Anchorage

"As an undergraduate, I was too intimidated to go to Anchorage because it's so urban, so big," said John-Shields, an assistant professor for UAA's College of Education. "It's practically no different from going to a university down states because there's no art, no displays from the people of Alaska."

UAA is now taking steps to change that, installing signs on campus that recognize, honor and welcome the indigenous people who, according to Lisa Cook, assistant to the dean of UAA's College of Arts and Sciences, "have made Alaska what it is-a beautifully diverse and culturally rich state, steeped in history and tradition."

The College of Arts and Sciences is home for the Alaska Native Studies program and other courses related to Alaska Native cultures. The outreach endeavor grew out of a conversation CAS Dean John Stalvey engaged in with John-Shields during a Southern Regional Education Board diversity conference they attended with other UAA faculty and staff in the fall of 2012.

While growing up in Minnesota, Cook frequented a grocery store that used bags with the words, "Thank you" printed on them in a variety of languages around the store's logo. On a recent trip back to Minnesota, Cook saw the printed grocery bags and brought home an inspiration-use simple, familiar words like the ones on the bags to create a feeling of belonging.

"The group really quickly morphed onto this idea," she said.

The committee looked at a map of Alaska languages and decided to move forward with 18 of them.

"Others beyond CAS were drawn in to help create the actual signage and assist with locating accurate Native language translations," Breinig said. "Alvin Amason was crucial in helping develop the actual artistic design of the final wall plaques and identifying appropriate imagery for each language represented." Amason is an acclaimed Sugpiaq artist who teaches Alaska Native art at UAA. 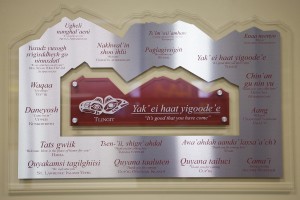 This sign bears Tlingit and other Alaska Native words of welcome. This and other similar signs have been installed throughout the UAA campus.
Photo by Philip Hall/University of Alaska Anchorage

Each sign cost approximately $4,000, including the cost of installation. SignCo Quality Signs Inc. made the first eight signs for the first phase of the project, Cook said, and plans have been made for up to 10 more signs to be installed, based on available dollars. Facilities Planning and Construction is paying for signs at Rasmuson Hall and Gorsuch Commons. CAS agreed to match what FPC put in; the CAS match would cover the cost of signs installed in the four buildings housing CAS classes. Bruce Schultz, vice chancellor for student affairs, paid for signs at UAA's University Center branch and the Student Union, Cook said.

The signs are crafted in two basic shapes, representing either water or land. A specific Alaska Native language is highlighted in the center of each sign, with an image pertinent to that particular culture and words from other Alaska-indigenous languages arrayed around that focal point.

"With each sign and its representations, we hope not only to honor our multitude of Alaska Native students, staff, faculty and visiting community members, but to give a unique and heartfelt 'welcome' to all who cross the university thresholds," Cook said.

The signs are a promising first step toward transforming UAA into a truly Alaska university that celebrates diversity.

"It's really, really important, mainly for recruiting, welcoming and respecting the indigenous people of Alaska, and for others coming to Alaska to realize there are indigenous people they need to pay respects to, who were there before the university was there," John-Shields said. "It's a big leap for the university and I applaud them for their willingness to put money and effort into this."