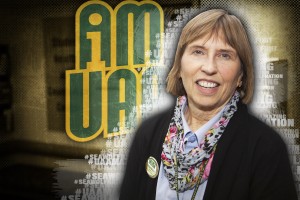 I AM UAA: Georgia DeKeyser
Philip Hall/University of Alaska Anchorage

The Student Health and Counseling Center (SHCC) looks like any clinic in the country-charts on the wall, scales in the rooms, a rack of US Weeklys in the waiting area. The only difference separating UAA's health center from other Anchorage clinics is the patients-every student taking six or more credit hours in a semester can stop by any time at no charge. General visits are already paid for through student fees, and any extra screenings come at a fraction of the cost of outside care. All told, the SHCC has a possible pool of over 10,000 patients on any given day.

Georgia DeKeyser stands at the helm of UAA's health center, overseeing a staff of medical experts, their innovative public health initiatives and a system of care specially crafted for college students. As a UAA alumna, DeKeyser knows the student situation well. In fact, she even got her start in the department as a student intern and now, over 15 years later, she's the director of the whole operation.

Hailing from a small farm town in southern Minnesota, DeKeyser was geographically blessed in her proximity to the Mayo Clinic, one of the nation's premier academic medical centers. She enrolled in nursing school at an affiliated college and completed her clinical rotations in the Mayo Clinic hospitals.

After earning her nursing degree, she and her husband decided to add a little adventure to their lives by spending a year in Alaska. "My husband had been here," she said of the decision. "We were in our mid-20s and we kind of thought of it as an adventure." Three children and three decades later, DeKeyser and her husband are still happy to be extending that one-year jaunt to the North. "It truly was an adventure," she laughed.

From intern to director...

After a brief career in stressful emergency rooms and intensive care units, DeKeyser opted to take a break from the nursing field to focus on her young family. Eventually, though, her husband encouraged her to head back to the classroom. "I really liked school but I thought 'How could I possibly do this?,' she reflected. "My husband said, 'Oh, just take a class-one class at a time.' So she enrolled in a master's level nursing program at UAA and kept a slow and steady pace. DeKeyser earned her family nurse practitioner degree from UAA in 1997, and a second master's as a psychiatric nurse practitioner in 1999. She's been at the university ever since.

"Even before I completed that second degree I started working here," DeKeyser said. "I was an intern in 1996, I came back to work in the fall of 1997 while I finished my second degree, and then continued working here after school on a part-time basis as my kids were growing up." Now, years later, her kids are grown (two of them even entered the medical field), she's an affiliated professor in the School of Nursing, recently opened a UAA alumni chapter for college health professionals, and sits as the director of the department that first welcomed her as an intern. Clearly, her Green and Gold roots run deep.

Since her days as an intern, the student body has grown, the campus has extended and the health center has kept pace. The clinic, located in Rasmuson Hall, has nearly doubled in size since DeKeyser first arrived at UAA, and expanded into a space once reserved for test proctoring (a room where DeKeyser herself once took her GRE exam). The former test-taking room has been transformed into a counseling center, with private cozy one-on-one rooms breaking off a large inviting waiting room (the former waiting room across the hall looks like a closet by comparison). Throughout this steady growth at UAA, the internship program has expanded as well.

...and from mentee to mentor

Every UAA nursing student, psychology intern or medical resident who starts an internship at SHCC gets a personal mentor. In the clincal world, this one-on-one professional relationship is known as precepting- students take care of patients individually and independently, but have a fully licensed staff member as their sounding board for opinions and advice. "Through the years, we have precepted over a hundred students," DeKeyser explained. Currently the SHCC has three interns covering psychiatric health, physical health and counseling psychology.

"It's a way for us to showcase what we do here," she said of the program. "We see it as an opportunity to encourage people to consider college health a sub-specialty." It certainly convinced DeKeyser. After starting her career in the emergency room, she refocused on student-centric college health following her internship. And she's not alone-of the 22 members on staff at SHCC, eight are former UAA health science students and a few are also former interns.

Now, a few years and promotions down the road, DeKeyser sits on the other side of the mentorship table. She's precepted dozens of students since joining the health center and, even as director of the SHCC, she still makes time to mentor the center's current counseling intern.

"I love to see the students blossom," DeKeyser said of her commitment to UAA's health center. "I like the fact that the health center has a lot of student interns coming through here. It's a lot of fun to watch that development."

As her administrative responsibilities increased over the years, DeKeyser had to focus her remaining time on a specialty. Although she's licensed in both physical and psychiatric nursing, it's clear she's found a calling in mental health.

The college environment provides a valuable setting for counselors like DeKeyser. "We really focus on developmental processes," she explained. Students are transitioning to a new way of life, and everything from stress and relationships to identity and spirituality can affect a student's wellbeing. Newfound freedoms come into play as well-"Students are emancipating from their parents for the first time, and I always try to remind students that parents are trying to get used to this idea, too," DeKeyser laughed. Overall, she believes the dynamics of college are significant and should be part of the health conversation. "It's a really tender time," she said.

Student-centered care, in DeKeyser's eyes, is what sets SHCC apart. "If a student were to go to Providence Hospital, they would be treated for a sore throat and maybe the provider would ask 'How are you doing in school?'" she explained. "Here, we're always asking 'How's it going in class? Are you caught up? Where are you successful? Where are you challenged?' That's why we're here. We are here to help students be successful in school."

That being said, UAA's proximity to Providence, the largest hospital in Alaska, is an additional boon to the campus health center. "We can't really predict what's going to walk into the health center, but if the need is beyond the scope of primary care, we refer very quickly," DeKeyser explained. "We're very fortunate to have Providence right across the street."

Student-centered care is the focus of SHCC, but so is quality clinical practice. "We really work hard at being a quality institution and department," DeKeyser said. "We not only work for the students but we work for the university. We're part of the bigger picture here, including students, parents and the university, and that's important to us to be a quality department."

"We try to be a part of the life of the university," DeKeyser said of her department's impact. The statistics speak to the center's success: in 2013, 46 percent of patients claimed they had no other available health care options, while 85 percent reported the treatment they received helped them be more successful in school.

As a former Seawolf, DeKeyser is perfectly placed to understand and administer to the medical needs of UAA students.

Furthermore, she's an excellent representative of what one student internship can lead to.