UAA-Yale Debate: Catch the podcasts, and a coach debrief

If you weren't one of the 600 in the audience at the UAA-Yale Debate Thursday, March 20, at East High-don't feel left out! Thanks to Eric Baldwin of UAA, we are able to offer you an audio podcast of the full debate, including the very impressive one-minute citizen "floor speeches." Twenty-four of them, both pro and con. They come up in the recording at about minute 48.

The YouTube video is also up now; please enjoy yourself at this link.

In addition, here's what our debate coaches, Steve Johnson and Amie Stanley, offered by way of debrief on how the four debaters fared.

I met with the coaches Tuesday afternoon over at the Fireside Cafe. Steve needed coffee (revving up for debate practice 5:30-8:30 p.m. that same night.) With a south-facing office, Amie needed something chilled to combat the afternoon heat; a mango smoothie was just the ticket. 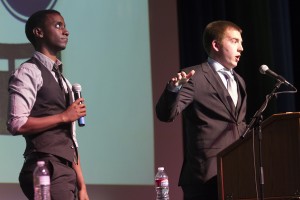 My first question was about the amount of eye-rolling and reactive gestures that both teams demonstrated during the debate. It felt more theatrical, a little less technical maybe, than UAA debates I had watched before. What did the coaches make of that?

"A lot of it is style," said Amie. "There is a certain balance and it can go too far. But BP (British Parliamentary debate) is meant to be an interactive audience format. Humor can go a long way toward making that connection with the audience. We just happened to have two sets of debaters geared toward that style, while we had very analytical debaters in previous years. Both fly, and I've seen both do really well."

"I did watch the video," Steve said. (Don't ask; he got stuck back stage and didn't actually get to watch the teams at work. He could hear though....) "And Sesenu (from Yale) is very expressive. Sam gets drawn into it with the asides and whispers and reactions during other people's speeches. Debate is theater. You can't get around that. It is argument empowered by presentation."

Amie said about a third of the audience participated in the pre-debate and post-debate opinion poll. Steve explained to the audience that the winning team would be the team that successfully persuaded the audience to change its views. Clearly, Yale managed to snag another 5 percent of the vote (from 36-42 percent) by the end of the debate, even though the majority of voters (53 percent in both polls) hung with UAA's defense of spending money on competitive athletics in public education. UAA Debate just started this polling opportunity for the audience this year.

Steve: "I went to an IQ Squared debate in New York last November. They used the same format, polling before and after. They declared the winner based on the audience's shift in attitude. I was interested in giving that a shot. We do it on all our public debates."

"It changes the calculus of the debaters. I didn't tell Yale how the debate would be decided. But when we presented them with the option of choosing sides, they immediately asked to take the argument against funding athletics. Their rationale was that they enjoy taking the hard side of the debate in public debates. They knew by the pre-audience vote, they knew they were swimming upstream. It's better to take the downside because you have more of an opportunity to move the audience. That was evidenced by UAA's side, starting out with 53 percent of the vote and ending up with 53 percent of the vote." 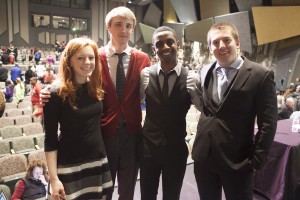 Steve: "UAA could have expressed some of the arguments we planned a little bit better. The argument that ... athletics provides an important safety net for students who might not be academically engaged, so it must be preserved. Yale was pretty easily able to re-characterize that as 'there are lots of good things that keep students involved, but we can't fund them all. (Remember the fois gras in the cafeteria?) Posing that constraint on that decision was effective for them to do. By saying there are lots of things that are good for students, but we can't afford them, made our position, that athletics has good outcomes, more suspect."

Is the audience getting better at delivering floor speeches?

Steve: "The number one piece of feedback I've gotten is how well the audience's speeches went."

Amie: "The level of commentary was so much higher." 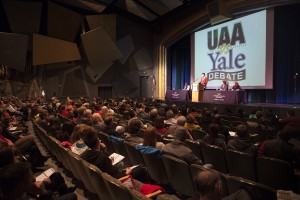 Both agreed that the audience was primed for the topic since many in Anchorage and Alaska are thinking about schools and school funding. They are reading about it and engaged in the discussion, so we heard some very  reasoned commentary about the topic in floor speeches.

Steve: "Amie really nailed it. I think we drew in a crowd who tends to be articulate. We drew in a crowd of teachers. Boy, that one teacher who stood up and listed all the different club opportunities and how if you don't pursue club sports you aren't going be selected for the competitive teams.... I was like 'Wow!' That's a great argument."

Steve and Amie also noted that about a quarter of the floor speeches were delivered by high school debaters, a tribute to their work in the community to coach high school, and now middle school, debate teams.

"UAA-Yale Debate: Catch the podcasts, and a coach debrief " is licensed under a Creative Commons Attribution-NonCommercial 4.0 International License.