Cheers to a year painting beer

Scott completed his 365-piece series in December 2014. Click here to read his complete blog chronicling the Year of Beer.

B.A. Art '09 Hometown: Spokane, Wash. (but in Anchorage since age 7) Fun Fact: Scott and his wife Maria have traveled the entire Pacific Coast from Washington to southern California on a tandem bike. 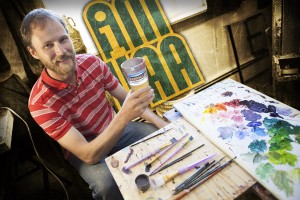 I AM UAA: Scott Clendaniel. Photo by Philip Hall/University of Alaska Anchorage

Disappointed by Hawai'i? Jazzed about Pennsylvania? Scott Clendaniel sees the world a little differently. For someone as invested in beer brewing, it makes sense- Pennsylvania is home to the nation's oldest active brewery, whereas heat contamination is a constant threat in the tropics. "Hawai'i was kind of a bummer for beer," he shrugged.

Beer, art and business blend together for Scott, who has worked as a full-time artist for nearly nine years. Together with his wife and business partner Maria, the duo are tackling their largest challenge to date. It's a new year's resolution with a following-release a new beer portrait every day for an entire year.

He kicked off his aptly-titled Year of Beer series in late December near Caribou Creek at Resurrection Pass. Scott and Maria were holed up at a forest service cabin on the Kenai only accessible by ski trails when he broke out the oil paints and started the series. The painting project has since continued in Hawai'i, at the couple's cabin-in-progress in McCarthy, the tasting room at HooDoo Brewery in Fairbanks, and will carry over to the fertile crescent of American brewing-Pennsylvania-on a trip this fall. Why Pennsylvania? "There are more breweries in the one city of Philadelphia than there are in the entire state of Alaska," Scott said. 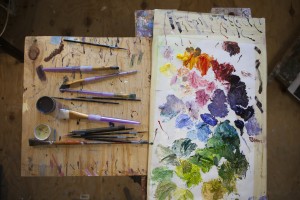 Most of his work, though, takes place in his home studio. With a refrigerator full of beer humming in one corner and an easel gifted from the UAA painting lab in the other, the small studio space is a clear indicator of his two life passions.

Scott has been painting since his AP art classes in high school. He continued painting on his first forays in higher education (both at Westerns-first Western State Colorado University, then Western Oregon University). After a few rudderless years, he opted to leave university life and return to Alaska. That's when inspiration struck.

"I was working at the brew supply store [in town] and decided I needed to do some paintings right now," he said. "So I quit the brew supply store and did these paintings [his first beer series, called The Color of Beer]." The first batch was surprisingly well received, and Scott had found an unexpected niche spanning the worlds of both art and craft beer. "It was cool to see just how popular beer paintings were," he said.

With a first taste of success, Scott decided to enroll at UAA and complete the art degree he had started years earlier. "I was paying my tuition by selling paintings at the time, which I thought was fairly remarkable," he said.

"I learned a lot. Some of the most important things I learned in life were during those last three years. UAA has some of the best professors. The art program was really awesome, the building is fantastic, the painting lab has these huge ceilings." Scott's final project, on a 10' by 6' foot canvas, took full advantage of the cavernous space.

"Every year in college is great, but the last three were probably the best" he said, hoisting a pint of his homebrewed cream ale.

99 Bottles of Beer on the Wall 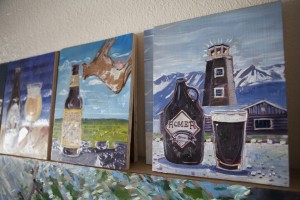 Scott continued painting beer while at UAA, juggling his diverse classes with an ambitious personal project dubbed 99 Bottles of Beer on the Wall. "I was coming home and doing all these beer paintings. I didn't get any credit for any of the beer paintings but I was definitely honing my skills during that project. It took like four years, but I did successfully make all 99 of them."

Again, the beer portraits received a lot of support. Scott credits his wife Maria for the positive response. "She's my wife and business manager. She does everything for me," he said. After Maria earned her M.B.A. from Alaska Pacific University, the duo decided it would be best to team up-Scott would paint, Maria would manage the business, and both could continue their adventurous free-spirited lives together. For 99 Bottles, Maria revealed each painting online one day at a time over a three-month span, ending with a show at Midnight Sun Brewing Company in their recently completed loft space.

The rollout generated buzz and attention and his opening turned into one of the more memorable moments of his career. Barb Miller, one of the owners of Midnight Sun, toasted the special occasion with a rare bottle of M-historically among the most expensive beer ever sold in the world. Scott estimated that, at the time, a single bottle was worth around $1,000. It's since sold for over $1,700. Clearly, this was a big moment for a beer nut.

The overwhelming success of his personal side project set the path for his current quest-adding 365 new beers to the wall. 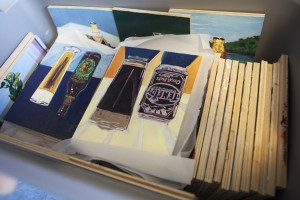 A barrel of beer paintings. Photo by Philip Hall/University of Alaska Anchorage

A Year of Beer

For this yearlong series, he's focusing on craft beers, whether they're from the 49th state or around the world. "I like to keep it local, because the beer is best when you're close to home," he said. "The beer here [in Alaska] is world-class in my opinion."

When selecting a subject for his next painting, he takes several things into consideration. The label has to be attractive, the beer has to be either well-known (cult followings included) or local to his current location and, lastly, he has to have personally sampled the daily draft. Every portrait is posted to his blog alongside his own review of the day's featured brew.

This, of course, has led to an influx of beer shipments from fans across the country and he's accumulating a growing supply in, around and on top of the studio refrigerator.

"A lot of these beers have actually been mailed to us from California, Philadelphia, Texas," Maria said while rifling through the refrigerator. "We don't know these people. We've never met them." 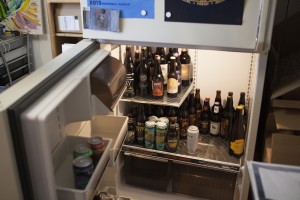 A refrigerator full of fan mail. Photo by Philip Hall/University of Alaska Anchorage

"This one came in the mail from a person who ordered a beer painting from me and we started trading beers," Scott said casually, while hoisting a tall dark bottle from the top shelf.

His audience has even gone international, with sales as far off as Florida, Hawai'i and even Australia. And yes, he does take requests. "There have been really steady commissions coming in since we released the 99 Bottles of Beer," he said. "At least every two weeks I get a random beer commission where I get to paint someone's favorite beer. That's always enjoyable."

He's sampled hundreds, probably thousands of beer, but his favorite batch has always been his own home brew. He's an equal opportunity beer lover in an industry of specialization; "I've never run into a beer I haven't liked," Scott said.

Scott is a fortunate man-a career merging a few of his favorite things, a growing pool of enthusiastic fans and the chance to travel along with his wife wherever the beer may take him.

When reflecting on the year so far, Scott smiled, refilled his pint glass from the tap he built into the side of his refrigerator and mulled over the largest concerns in his life. "I hope I don't screw up and miss a day," he joked.

The first five months of the Year of Beer series will be on display at Midnight Sun Brewing Company throughout the month of June. Scott will tap the keg at the show's debut this Friday, June 6 as part of Anchorage's First Friday series.

For daily updates as the Year of Beer unfolds, visit Scott's blog, where he releases a new painting (paired with his own review of the beer) each and every day through New Year's Eve.

To purchase Scott's work, visit his page on Etsy. 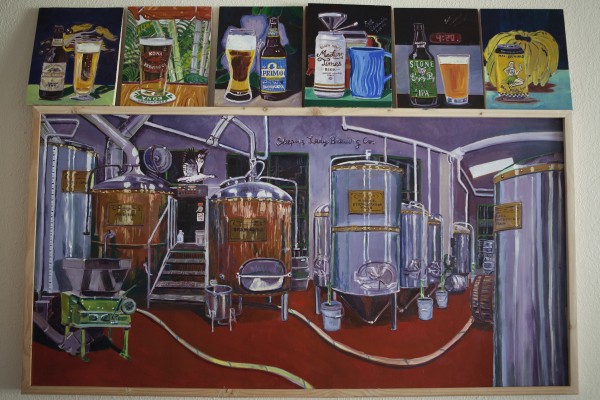 Several pieces from the 'Year of Beer' series rest atop a larger portrait of Sleeping Lady Brewing Company. Photo by Philip Hall/University of Alaska Anchorage

"Cheers to a year painting beer" is licensed under a Creative Commons Attribution-NonCommercial 4.0 International License. 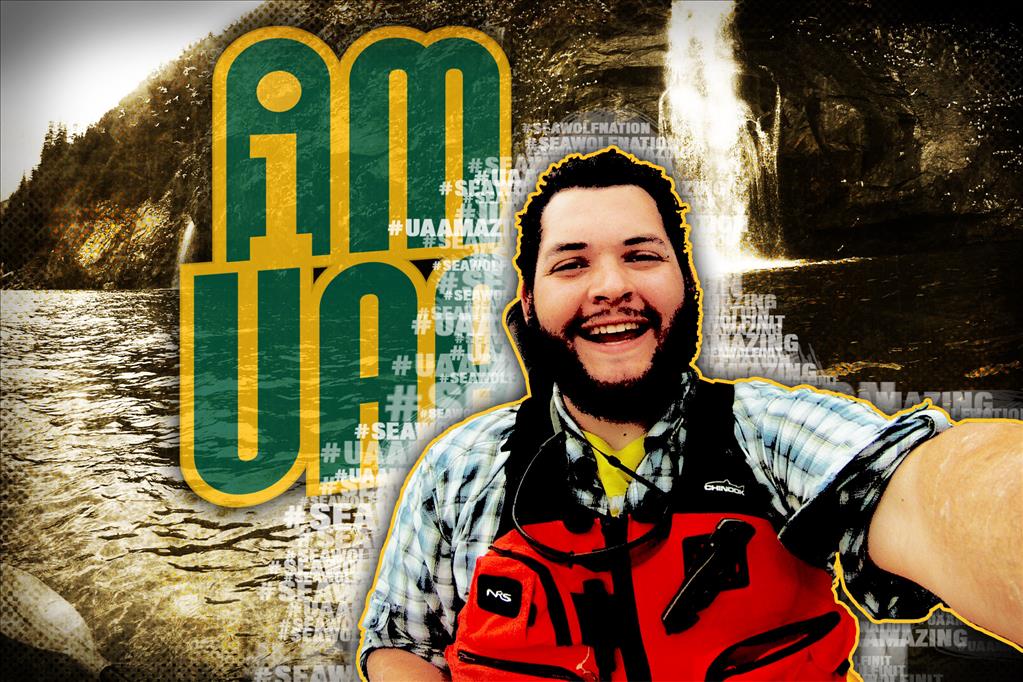 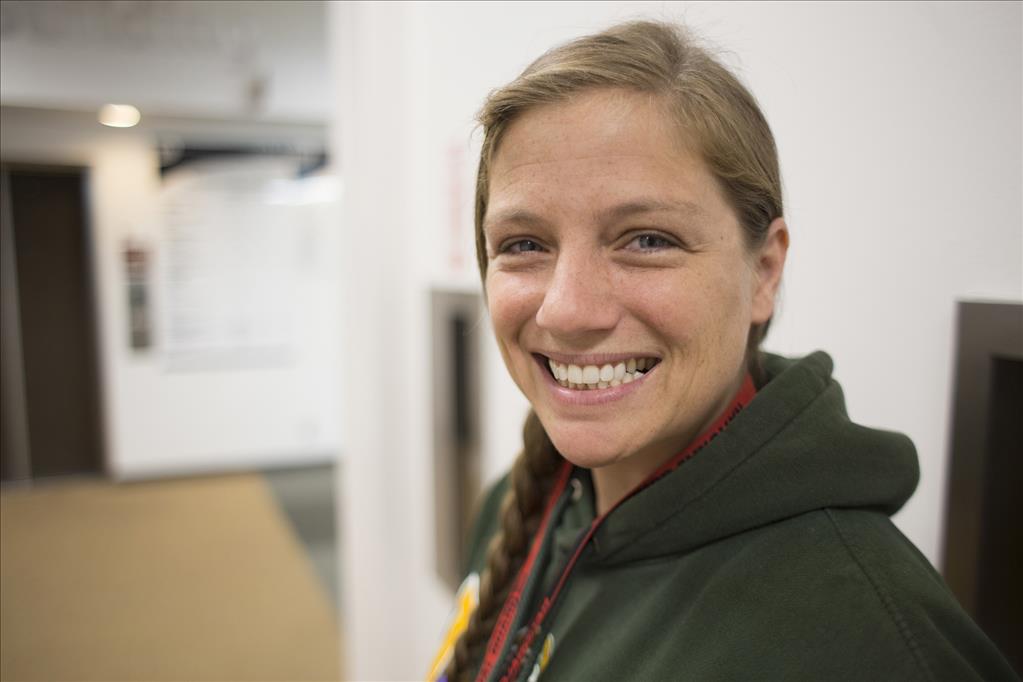 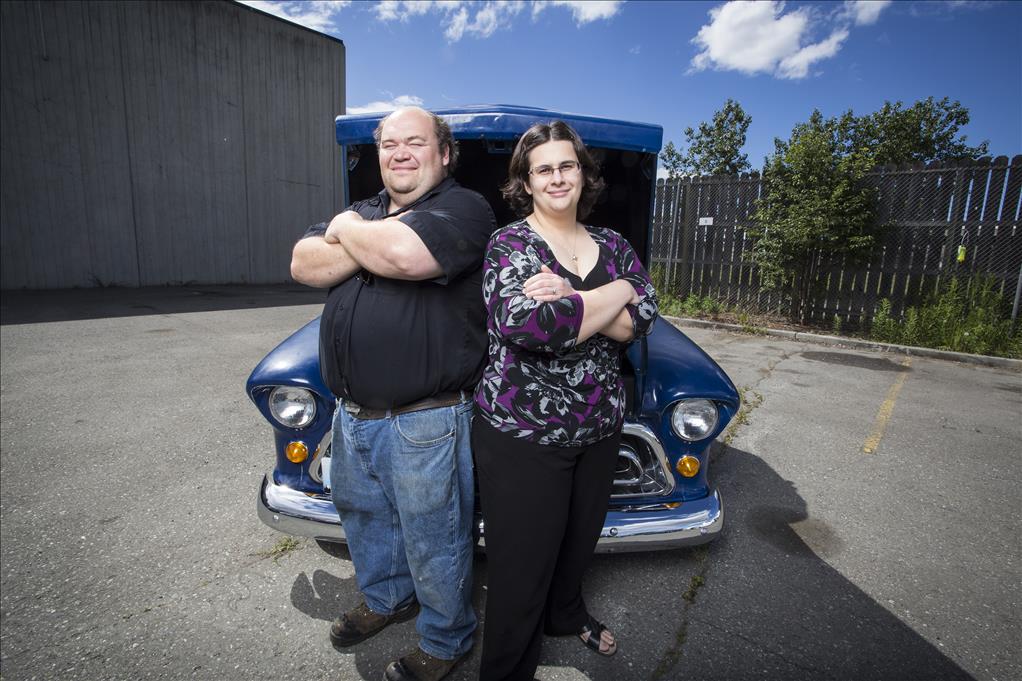 A UAA marriage steeped in a love of cars 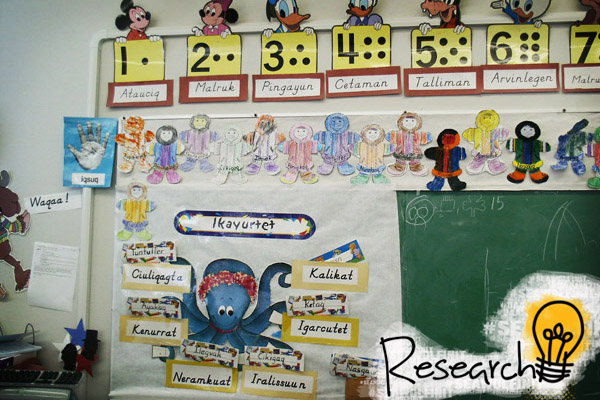 Is Alaska ready to reform schools that don't work well for students? 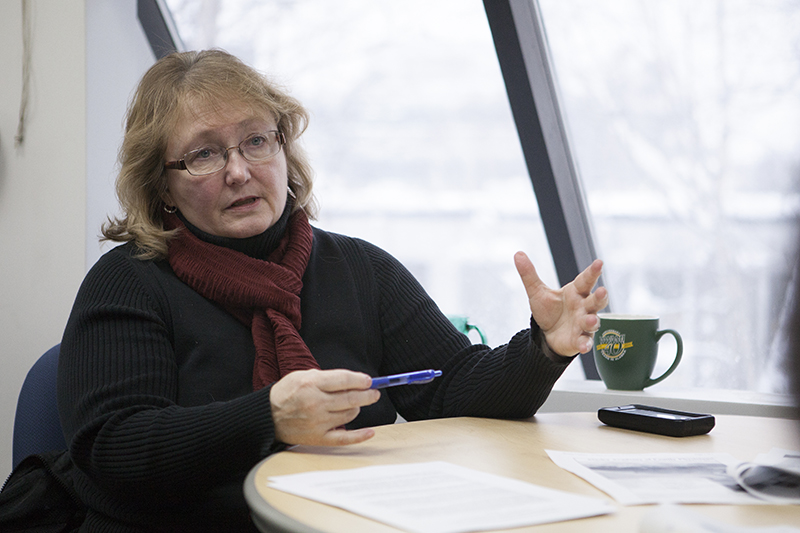