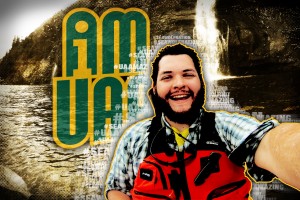 "The ocean is only 5­-8 percent mapped," said Cody Gibson, a geomatics student and adventurer who is committed to mapping the mysterious depths of the ocean. The challenge? Average depths of about 14,000 feet-that's 2.65 miles. For Cody, that vast unknown is job security. He's onboard with Fugro Pelagos, a company with surveyors around the world who specialize in mapping the seafloor.

Before we learn more of Cody's story, an important question: what does a person studying geomatics do? Besides wear orange vests around campus, of course.

"Essentially we're mapping the Earth, using math, physics, law practices, everything possible," he said. "We're not finding actual locations, we're finding the point in three-dimensional space, so it's as close to accurate as you can get."

With just one semester left until his December graduation, Cody's looking forward to committing full-time to Fugro, the company he first connected with as an intern almost two years ago. Geomatics grads are in such high demand in Alaska, he said, it's rare for a student to graduate without a job offer in hand.

"If they don't have an offer by graduation," he said, "they'll have one in a matter of weeks." Most will end up working in land surveying, but Cody is excited to be working in his specialized field, hydrography, which keeps him out on the water through much of the summer, surveying and outfitting boats with state-of-the-art mapping equipment in between stints in the office downloading data and working with AutoCAD software to create maps.

"Most of the equipment is $100,000 or more for a single item," he said. So, being intimately familiar with how to maintain it is essential. Also essential? A firm grip. No problem there for Cody, who has perfected a bone-compressing handshake. He arrived at UAA four years ago and became a walk-on with the track & field team, throwing shotput, javelin and discus during the three years of eligibility he had left. 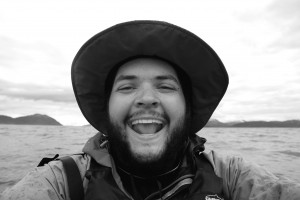 Cody is available (if you can find him) for tips on taking awesome selfies. Photo courtesy of Cody Gibson.

UAA is Cody's third college, which wasn't so much a result of wanderlust as it was a search for the perfect match. After graduating from high school in Oregon, he studied photography at Southern Oregon University.

"It was a very artsy university and the photography that I did wasn't necessarily artsy," he explained. "It didn't meet that vibe."

He transferred to University of Colorado Colorado Springs. There he exhausted their course catalog in photography and started thinking about alternatives. He caught sight of a roadside survey crew and it got him thinking.

He began researching geomatics programs and narrowed it down to the three programs in the West-including UAA's-where he wouldn't have to pay out-of-state tuition, a perk of the Western Undergraduate Exchange program. Alaska sounded like the best adventure, so he headed North. 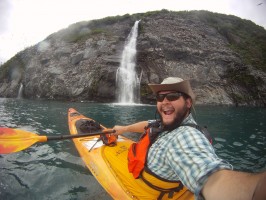 Cody on a solo kayaking adventure in Alaska. Image courtesy of Cody Gibson.

"I love it. I've spent less than a month out of the state since I moved here," he said.

When he's not working or in class, he's exploring Alaska. Solo kayaking adventures, hiking, biking. Two years in a row, he won the Denali National Park road lottery and was able to drive into the park.

"The first time up there...it's like going to Mars," he said. "It's so vast, these valleys that used to be huge rivers. Once you finally get out to the very end and see Denali, it's an incredible view. Hopefully I'll get it again this year and get to spend a little more time out there."

He keeps a camera close by on his adventures, too. His first summer in Alaska he spent working for an aerial mapping company. Also on his C.V.? Whitewater photographer.

"I still love film photography. That's one thing that being a photographer taught me-respect for film," he said. "With film photography the quality is infinite whereas with digital it still has limits."

If all goes to plan, Cody's next adventures may take him back up in the air to get a better bead on the oceans below.

"There's an overlay between hydrography and LIDAR, which is where they shoot lasers down from a plane to map the earth by millions and millions of data points," he explained. "There's a crossover there called LIDAR bathymetry and that's really what I'm interested in-mapping the ocean with LIDAR."

That's something Fugro does, he said. And though he envisions Alaska as a home base from spring to fall, his field gives him the opportunity to travel around the world. His degree will take him everywhere from Belize to Trinidad to Saudi Arabia for winter work.

Alaska, too, will remain on his list for personal and professional exploration.

"I've only been to a small percentage of Alaska and there's so much left to do," he said. "I came up to Alaska for an adventure and exceeded my expectations by a long shot."

Bonus geomatics-in-the-real-world videos: News watchers learned a little more about geomatics and hydrography with the disappearance of Malaysia Airlines' Flight 370 through CNN's 24-7 coverage of the event and aftermath. Check out this clip from Anderson Cooper 360 illustrating the depth of the Indian Ocean.