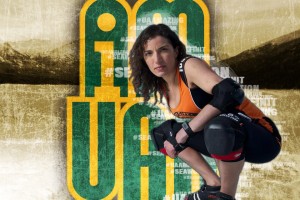 On the water, she's a paddleboard entrepreneur soaking up the summer sunlight. On the rink, she becomes Lil' Red Vette, dropping derby opponents to their kneepads. And in the classroom, she's a role model for her multilingual crew of students-like them, she too grew up in Anchorage amid feelings of constant culture shock.

Marvat Obeidi-a first-generation Palestinian-American, a born-and-raised Alaskan-has struggled and succeeded in a sometimes-isolating environment, yet that personal experience enhances her classroom every day. She works with English language learner (ELL) students-kids growing up in a non-English-speaking household-and can relate to the challenges facing her students in the American education system. She works at Fairview Elementary, where Spanish, Somali and Samoan are among the 14 languages floating through the hallways, and she'll earn an ELL endorsement from UAA in January. "It's so exciting to finally see UAA bringing [the ELL program] because we need it so bad in this state," she said.

Marvat radiates enthusiasm about most everything, but she's particularly passionate about her role as an educator. "I am addicted to Fairview," she said. "You come any day and you will see magic happening in that school."

She's one of those people who seem tailor-made for their career, but the enthusiasm for Alaska wasn't always so high. It's a story of cultural identity and salvation on roller skates and it all starts two generations ago in Palestine...

Once upon a time in Jerusalem

The Obeidi family story begins with Marvat's grandfather, who left school at 8 and married at 16. He served as a police officer in Jerusalem, until the growing war and dwindling resources forced him to head west for a better future. He hitchhiked from the harbor in New York to Arizona and on to Alaska, following whispers of turquoise, oil, gas and gold. With no contacts and no English skills, he settled in Anchorage and began building the better life that first lured him so many thousands of miles from home. He opened a Midtown shop on Spenard Road peddling a collection of East-meets-North accessories (think jewelry, tapestries and Fred Machetanz paintings).

Marvat's father moved to the States next, making a go at college in California before heading north to help his father's growing business. His childhood sweetheart, Marvat's mother, soon left her job at a girl's school in Jerusalem to join him. With no money, no friends and no English, the young couple worked hard, eventually saving enough to open their own frame shop and, later, an art gallery (the family business is still operating at 36th Ave. and Arctic Blvd. in Anchorage). 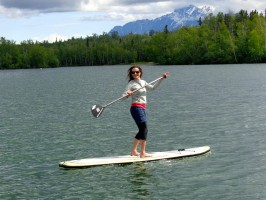 "At the time we were the only Palestinian family," Marvat said of her childhood. "It was very lonely to say the least." Caught between two cultures, two languages and a religious divide, Marvat says she and her three siblings felt completely isolated in Anchorage. "We were ashamed of it, embarrassed to be anything other than American. We didn't have family and cousins to say 'no, it's okay to be different.'" The vast cultural divide between her family and her classmates led to confusion, frustration, an aversion to Alaska and a strained relationship with her parents. "We were kind of embarrassed of our heritage growing up," she admitted.

Her family's dominant cultural context led her to UAA, a parental decision she wasn't thrilled with. "Education was very big for my family," she explained. "My Dad never finished, my mom had a one-year certificate, and making sure their kids went to college was their #1 priority." Her protective parents, though, didn't want that education taking their children too far away. "[My parents] made it very clear that women didn't go to another state to go to school," she said. So UAA it was.

At the time, there was no elementary education program to fit Marvat's career interests, so she focused on social work and earned her B.S.W. in 1999. That lasted a year. "I went into social work because I knew I wanted to work with kids and I figured if I couldn't teach them I could work with them," she said. "It was the hardest thing. I couldn't create those boundaries. I wanted to take all the babies home with me," she laughed. "I couldn't do it emotionally."

Still unhappy with her place in Alaska and growing increasingly exasperated with her family, she decided to head south to Portland for what would become six years of much-needed distance. It was enough time to earn a master's in teaching from Portland State University, and enough space to reflect on her place in the world. Master's degree in hand, she decided it was time to close that distance and come back home.

Marvat is now an ELL resource teacher at Fairview Elementary, a critical position in a school district representing 91 languages. Throughout the day, she works with small groups of students to tackle problems in a more focused and fun atmosphere.

She's visibly passionate about her profession and draws from her own childhood in an Arabic-speaking household to empower her students. "I was an ELL student," she explained. "I can tell you what it's like to be those students and what it's like to go home and have no help with your homework.

"When I'm in the classroom and those kids are struggling and having a hard time, I remind them that I was you and you can be me if you concentrate and focus," she continued. "They say 'But you don't have an accent and you can read so well,' and I remind them it came from education and a desire to learn. That's why I'm standing in front of you-to be your role model and your reminder that you can make something out of yourself."

Although her role is singly focused on English language acquisition, she credits her Fairview co-workers for creating a team where support runs deep. "It's just a really, really powerful school," she added. "Educators and administrators respect each other and believe and trust what we're doing, and when you respect each other it's really empowering to those students. At Fairview, everyone is working together." 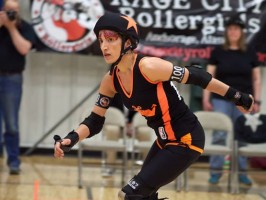 Marvat, or Lil' Red Vette as she's known on the rink, plays jammer for the Rage City Rollergirls. Photo courtesy of Marvat Obeidi.

Another boost on the road to self-confidence was the support of women in elbow pads and helmets. Marvat joined the Rage City Rollergirls-the Anchorage roller derby team-on her return to Alaska, lacing up her skates and donning the derby name Lil' Red Vette. She is the organization's acting secretary, travels the nation with the All*Stars squad and speaks of the group with the same love she holds for her job.

"We take women from all walks of life," Marvat said, explaining the non-profit team's focus on service, diversity and the empowerment of women. "It doesn't matter what happens in your life, we open up our doors to every single woman. We have a tagline that says 'roller derby saved my soul' and there are a lot of women who live by that. I was not coming from a bad place, but my confidence and self-esteem came 150% from Rage City Rollergirls."

"Rage City gave me permanent confidence," she continued. "There is nothing out there that can break my confidence. It's something I earned on my own, its something I built on my own. My strength as a woman-my empowerment as a woman-came from roller derby."

Marvat has come a long way since her first begrudging tour of UAA. For starters, she's happily enrolled in the ELL program (and admits she may talk about Fairview too much to her classmates). But she's also built confidence from derby, found harmony with her heritage and gained perspective from her sojourn in Oregon. She's the third generation to open a business in Alaska (she co-owns a paddleboard company on Wasilla Lake during the summers) and she's proud of her family, their sacrifice and their story.

"I couldn't be happier," she said of the past few years in Alaska. "Am I an American? Am I Palestinian? Am I east, am I west? I just needed to be alone to give birth to myself. And I'm really happy with what I created with my life. My mom and dad are two of my best friends. My brother and sisters are super-happy, we all were able to find a balance between our eastern and western cultures."