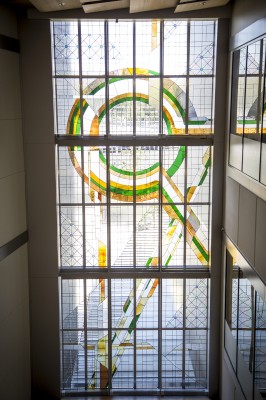 Washington artist Jack Archibald and his assistant Larry Bach successfully tackled the Alcan (the Alaska Canada Highway connecting the 49th State to the Lower 48) with a trailer stuffed full of stained glass this month, arriving in Anchorage without so much as a cracked panel. Their secret? A pothole and frost-heave resistant combination of foam and wooden crates screwed to the trailer floor.

But you won't be thinking about logistics when you crane your neck to take in the new two-story, 36-panel stained glass installation in the ConocoPhillips Integrated Science Building (CPISB). The piece, "Stellar Isomer," plays with the changing Alaska light through amber, green, gold, blue and beveled clear panels.

"One of the things I like about glass, the windows change with seasons, light, clouds," said Archibald after maneuvering back to ground level from 30 feet up in the aerial lift. He and Larry were on their fourth day of installation and putting the finishing touches on the piece. "What you're seeing now isn't the night window. It's not a radical shift, but it's different."

Inspired by the multiple scientific disciplines in CPISB, you might notice connections to astronomy, maybe molecular design, possibly a landscape.

Archibald worked with a CPISB art selection committee to make sure this piece would fit the character of the building.

"One of the things about this window that the committee really wanted was a lot of light transmission," he said. Coming from the Pacific Northwest, he was familiar with designing for cloudy days and long, dark nights. And he's been doing it for decades.

"You want to know how I got into stained glass? I had a shack with no windows. I didn't know how to frame a building, so I kind of went, what am I going to do?" he said with a laugh. His solution? Take a night class and learn to fabricate stained glass panels to pop into the existing structure. Not too long after that, he fell in love with the idea of bending light and working with glass.

Some of the glass for "Stellar Isomer" he sourced from a Seattle-area glass blower, Jim Flanagan of Fremont Antique Glass. "He blows a vase, then slits it, lets it heat back up and slump down. It's flat and I can work with it then," Archibald said. "He's the only guy in the world who makes glass like that I can work with." He digs those tiny imperfections in hand glass that make each piece unique and special.

Selecting the Archibald piece for UAA

Their 2,000-mile trek from Archibald's Camano Island, Wash., studio was a little wilder than most of the trips Archibald has undertaken to deliver his dozens of public art installations. Definitely more bears. His portfolio includes work throughout Washington and Oregon as well as in Arkansas, Utah and Florida. The UAA piece is technically his second Alaska installation, knocked out of first place by an installation at a Chugiak fire station just a few days previous. 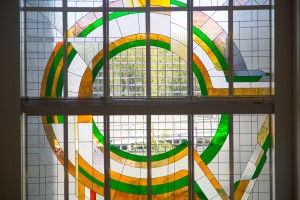 The decision makers at UAA didn't always have stained glass in mind for CPISB. A committee of UAA staffers worked with the state's Percent for Art program to put out a request for proposals and winnowed the initial applicant pool from about 350 down to five or six finalists, including Archibald, said Stan Vanover, a senior project manager from Facilities Planning & Construction. Finalists came to UAA to check out CPISB before submitting full proposals.

"Once we actually saw the proposal from Jack, that's when we knew, this part of the building, this is what we want to do," said Vanover.

Colloquially, you may have heard folks refer to the "One Percent for Art" program, but Vanover clarified that Alaska's program is actually "Percent for Art" and projects at UAA usually work out to ½ to ¾ percent for art. With a $104 million project like CPISB, they want to be mindful of maintaining a careful balance between spending state money on facilities vs. art.

Archibald interrupted with a quick, "You can't go wrong with art!" Vanover laughed and said, "I knew you'd take exception to that."

"This isn't the only piece for this building," continued Vanover. "We have a sculpture slated to be installed out front next May, I believe, by another artist, Heath Satow." (See a rendering of Satow's piece here on his website.)

There is also a selection process underway to contract with artists for public installations in the Health Sciences Building, completed in 2011, and the new Alaska Airlines Center, opening this fall.

As for Archibald and Bach, they felt like they earned a little vacation and had plans to take their (empty!) rig around Alaska before making the return trek to Washington, this time without worrying so much about those Alcan bumps.